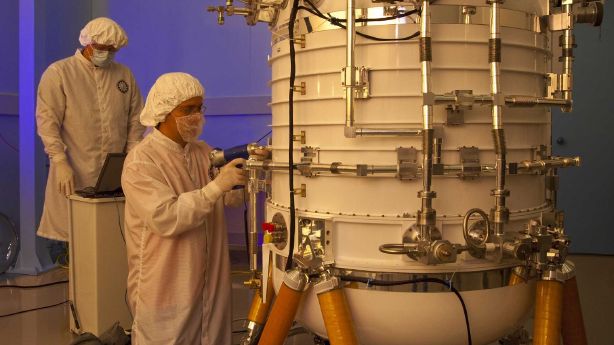 SALT LAKE CITY Stargazing Utahns may have already seen Comet NEOWISE, which is visible above the northwest horizon about an hour and half after sunset.
The comet is expected to be visible much of the summer, coming closest to Earth on July 22 when it will be a mere 64 million miles away.
Utah State Universitys Space Dynamics Lab played a key role in the comets discovery. The lab in North Logan built the space-based telescope that enabled NASA to discover the comet on March 27.
In 2009, NASAs Widefield Infrared Survey Explorer, or WISE, was launched into space. The telescope started taking pictures in December 2009. It was placed on orbit hibernation in February 2011. In September 2013, NASA woke up the sleeping spacecraft to assist with the agencys efforts to identify and characterize the population of near-Earth objects.
At that time, NASA renamed the spacecraft Near-Earth Object WISE, known as NEOWISE, and it began hunting the universe for comets and asteroids close to Earths orbit. The comet was named after the spacecraft that first spied it.
Space Dynamics Lab designed WISE to detect heat given off by objects in space ranging in temperature from minus 330 degrees Fahrenheit to 1,300 degrees Fahrenheit. Because WISE was designed to look for objects cooler than human eyes can observe, the telescope was built to detect infrared light. The mission also required that the telescope remain cooler than the objects it was photographing, which was an engineering challenge of galactic proportion, according to a Space Dynamic Lab news release.
#NeowiseComet over Maverik Stadium last night! #AggiesAllTheWaypic.twitter.com/uEGn2GZ7SH
— USU Football (@USUFootball) July 19, 2020
Pedro Sevilla, Space Dynamics Laboratory NEOWISE program manager and payload operations lead, said the discovery of Comet NEOWISE is an exceptional example of the success of the NEOWISE mission. The opportunity to view a newly discovered object in space with the naked eye is extraordinary.
The Space Dynamics Laboratory has worked with NASA for decades to help reveal the unknown for the benefit of humankind, he said.
We are honored to be a part of this important mission, Sevilla said.
Comet NEOWISE was created at the dawn of the solar system 4.6 billion years ago and will start its long cosmic flight past the orbits of Jupiter, Saturn, Uranus, and Neptune to the distant horizons of the system in mid-August.
The comets orbit is about 6,800 years, which means it wont make its way back to the inner solar system until then.
Tips and tricks for catching Comet NEOWISE before it disappears for another 6,800 years:
Find a spot away from city lightsJust after sunset, look below the Big Dipper in the northwest skyBring binoculars or a small telescope!
More: https://t.co/zt8FBvw0AOpic.twitter.com/iPP47xYPzL
— NASA (@NASA) July 19, 2020
NEOWISE is a project of NASAs Jet Propulsion Laboratory, a division of Caltech, and the University of Arizona, supported by NASAs Planetary Defense Coordination Office.
As one of 14 university affiliated research centers, Space Dynamics Laboratory serves as a subject matter expert in its core research areas to the the federal government, ensuring that essential engineering and technology capabilities are maintained.
Space Dynamics Laboratory is a research laboratory headquartered in North Logan and has offices in Albuquerque; Bedford, Massachusetts; Dayton, Ohio; Huntsville, Alabama; Houston; Los Angeles; Stafford, Virginia, and Washington, D.C.
Photos
Related Stories