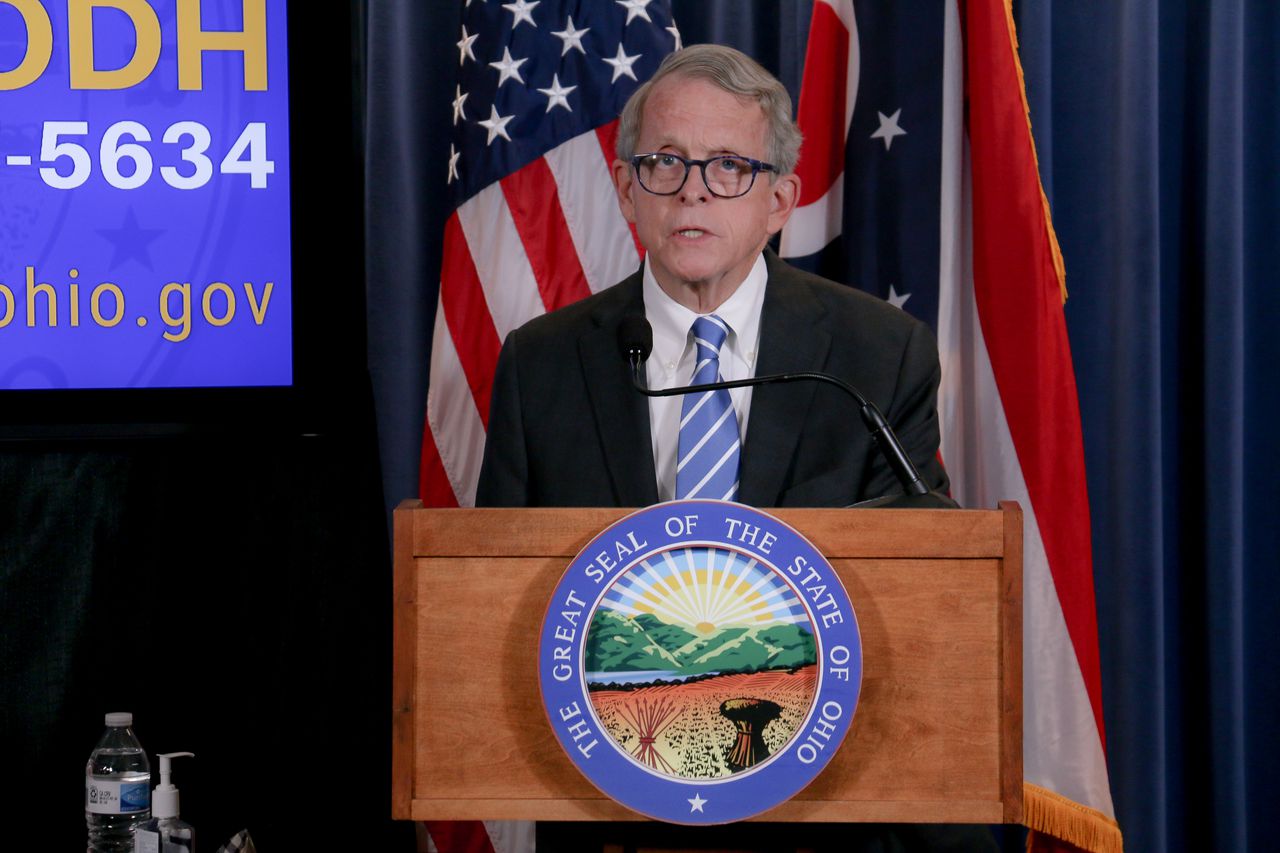 COLUMBUS, Ohio — Ohio State football doesnt publicly release its coronavirus testing numbers, but I always wondered if state health officials at least were getting them. Gov. Mike DeWine said he is not aware of the state getting that information from the wide-ranging testing of asymptomatic athletes currently taking part in voluntary workouts on Ohio States campus.
I wish they would disclose them (publicly). I wish they would, DeWine told me in a phone interview over the weekend.
Ohio State football players began voluntary workouts on June 8, while mens and womens basketball started June 15 and four more sports June 22. All sports stopped workouts on July 8 after an undisclosed number of positive tests. Athletes were retested on July 13, and workouts were cleared to resume July 14.
DeWine said he has no reason to believe the testing results for Ohio States college athletes would be different than for any group of people in their late teens and early 20s. Thats something Ive discussed a lot — it doesnt seem as if the voluntary workouts themselves are huge risks for spreading coronavirus. But being out in the world at that age might be.
Thats exactly why OSU sharing those testing results might serve the public good. As DeWine pointed out, Ohio States numbers are folded into the general state numbers, so they are counted. But a specific positivity rate when testing young people who arent showing symptoms might be a window into how the virus is or isnt spreading in Ohio.
That would be valuable information, DeWine said. I guess I didnt think about the fact that they had not disclosed those.
No school is releasing the names of athletes that test positive, and no one is asking for that. Thats an obvious privacy issue. Ohio States statement on its decision is that it believes releasing the numbers could lead to individual athletes being identified, though its not clear how that would happen.
The discussion has been going on throughout college football as media pushes for transparency and schools look for rules to be applied across the board. Former Ohio State president Michael Drake, while testifying before Congress three weeks ago, said, I believe its appropriate for the schools to report the cases, even as Ohio State was not. Now, the governor of the state is saying the same thing.
DeWine asked me if other schools are publicly reporting numbers, and I told him that many are. An Associated Press survey last month found about half of the power conference schools were releasing numbers. Conference mandates would put things on equal footing, but that hasnt happened yet. But all around Ohio State, schools like Michigan, Michigan State, Indiana, Notre Dame and Kentucky are reporting numbers, while the Buckeyes are testing and keeping the results to themselves. For instance, Michigan on Friday reported that 121 athletes and coaches had been tested in the latest round, with four positives. Overall, Michigan has conducted 635 tests on players and staff, with eight positives.
I asked DeWine if he told Ohio State hed like to see the numbers.
I probably will, he said.
Ohio States plan to resume workouts, including athletes signing a Buckeye Pledge that some viewed more as a waiver, was comprehensive. The Buckeyes outlined strict guidelines, demanded adherence to social distancing, hand-washing, and cleaning and disinfecting protocols, and seemed to take every aspect of the coronavirus fight seriously. Ohio State, with vast resources and vast reasons to keep players healthy (like millions in television revenue) could be a model for smart virus protections. The Buckeyes could be a leader in the fight.
If only theyd show us, and the governor, exactly how its going.
Fanatics has released Ohio State Buckeyes Adult Face Coverings. This 3-pack of adult masks, retails for $29.99.
New Ohio State face masks for sale: Heres where you can buy Ohio State-themed face coverings for coronavirus protection. A 3-pack is available on Fanatics for $29.99.
More OSU coverage
Camden County (GA) coach Bob Sphire talks recruitment of 2022 Ohio State football target Jamie Felix: Buckeyes Recruiting Roundup
Breaking down Ohio States 2022 recruiting targets and predicting the next verbal commit: Buckeye Talk Daily Pod
Jordan Hancock, 4-star cornerback, commits to Ohio State football: Buckeyes recruiting
What Jordan Hancocks commitment means for Ohio State football: Buckeyes Recruiting
Gov. Mike DeWine explains why he hopes football can block a coronavirus surge in Ohio
Ohio State football and Benedictine alum Jerome Baker comes back to put on backpack giveaway
Alabama is Ohio State footballs biggest threat to making recruiting history in 2021: Buckeye Take
Ohio State footballs 2022 recruiting class debuts at No. 2 in 247Sports rankings: Buckeyes Recruiting
Jumping up and down for Zach Harrison — Ohio State football defensive line preview: Buckeye Talk Daily Pod