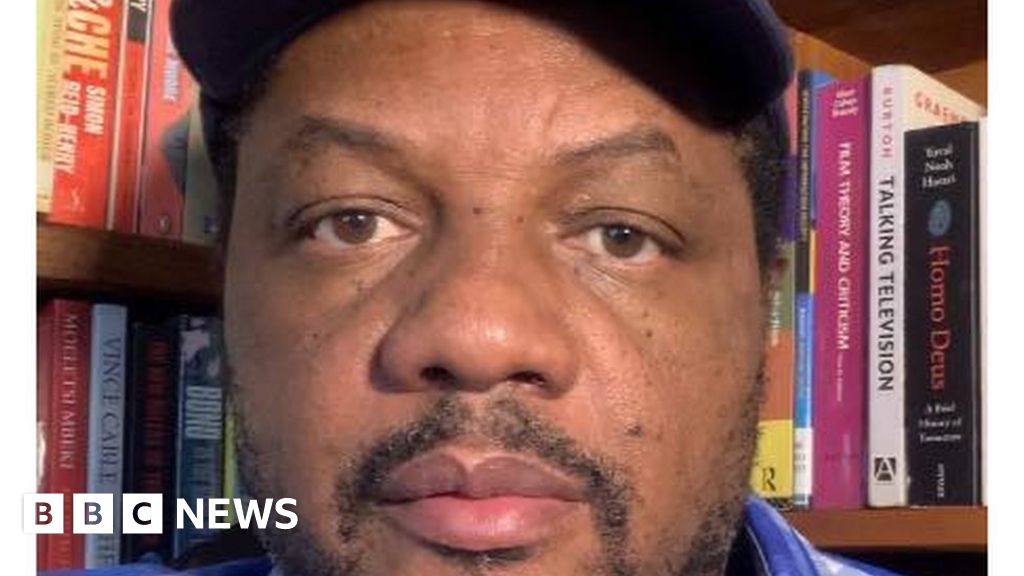 Image copyrightHopewell Chin’ono/FacebookImage caption
Hopewell Chin’ono has embarrassed the government with a string of exposés
A Zimbabwean journalist who recently exposed alleged government corruption involving coronavirus supplies has been charged with inciting public violence.
Hopewell Chin’ono live-streamed his arrest before being told to put his phone down.
An opposition politician, Jacob Ngarivhume, has also been arrested in Harare on the same charges.
In a statement, Zimbabwe’s police appeared to confirm that the two arrests were connected.
The US embassy called Mr Chin’ono’s arrest deeply concerning, while his lawyer called it an abduction.
“We’re not sure where he has been taken. His helper says they did not produce any warrant when they came to his house,” human rights lawyer Beatrice Mtetwa said in a video statement.
Motioning to a smashed patio door at Mr Chin’ono’s home, Ms Mtetwa said eight or so security agents were involved in the raid.
Campaign group Amnesty accused Zimbabwean authorities of “misusing the criminal justice system to persecute journalists and activists” and said “the arrests of Hopewell Chin’ono and Jacob Ngarivhume are designed to intimidate”.
This video streamed on Facebook appears to show the moment the investigative journalist was confronted inside his home:
What did Mr Chin’ono report about?
Mr Chin’ono’s reporting on alleged Covid-19 procurement fraud within the health ministry led to the arrest and sacking of Health Minister Obadiah Moyo.
President Emmerson Mnangagwa fired Mr Moyo earlier this month for “inappropriate conduct” over the $60m (£47.5m) medicines supply scandal.
Zimbabwe’s opposition MDC party said the state was persecuting a journalist for exposing government corruption.
A government official later responded by tweeting that journalists were not above the law.
Who was the arrested politician?
Image copyrightJacob Ngarivhume/FacebookImage caption
Opposition figure Jacob Ngarivhume is the organiser of a planned protest
Jacob Ngarivhume leads a tiny opposition party called Transform Zimbabwe.
But he appeared to be organising plans for an anti-government protest on 31 July.
Like Hopewell Chin’ono, the opposition politician was detained in the capital, Harare, on Monday in what critics said was a concerted move to stifle criticism of the government.
What’s happening in Zimbabwe?
BBC Africa correspondent Andrew Harding says the incident comes at a time of rising tensions in Zimbabwe, with hyperinflation strangling the economy, and talk of a new round of mass protests against Zanu-PF, the party that has run the country since independence.
Zimbabwe’s government promised reforms and economic growth after former President Robert Mugabe was ousted from power three years ago.
But critics say it has reverted to its old habits of repression and corruption.