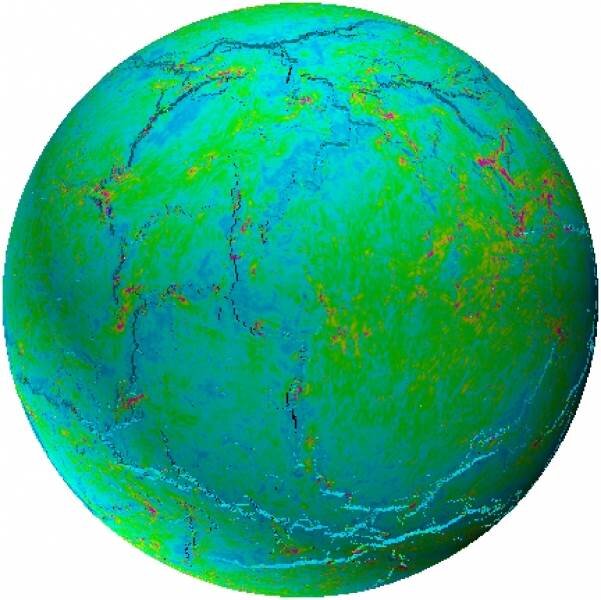 The activity of the solid Earthfor example, volcanoes in Java, earthquakes in Japan, etc.is well understood within the context of the ~50-year-old theory of plate tectonics. This theory posits that Earth’s outer shell (Earth’s “lithosphere”) is subdivided into plates that move relative to each other, concentrating most activity along the boundaries between plates. It may be surprising, then, that the scientific community has no firm concept on how plate tectonics got started. This month, a new answer has been put forward by Dr. Alexander Webb of the Division of Earth and Planetary Science & Laboratory for Space Research at the University of Hong Kong, in collaboration with an international team in a paper published in Nature Communications. Webb serves as corresponding author on the new work.
Dr. Webb and his team proposed that early Earth’s shell heated up, which caused expansion that generated cracks. These cracks grew and coalesced into a global network, subdividing early Earth’s shell into plates. They illustrated this idea via a series of numerical simulations, using a fracture mechanics code developed by the paper’s first author, Professor Chunan Tang of the Dalian University of Technology. Each simulation tracks the stress and deformation experienced by a thermally-expanding shell. The shells can generally withstand about 1 km of thermal expansion (Earth’s radius is ~6371 km), but additional expansion leads to fracture initiation and the rapid establishment of the global fracture network (Figure 1).
Although this new model is simple enoughEarth’s early shell warmed up, expanded, and crackedsuperficially this model resembles long-discredited ideas and contrasts with basic physical precepts of Earth science. Before the plate tectonic revolution of the 1960’s, Earth’s activities and the distribution of oceans and continents were explained by a variety of hypotheses, including the so-called expanding Earth hypothesis. Luminaries such as Charles Darwin posited that major earthquakes, mountain-building, and the distribution of land-masses were thought to result from the expansion of the Earth. However, because Earth’s major internal heat source is radioactivity, and the continuous decay of radioactive elements means that there is less available heat as time moves forward, thermal expansion might be considered far less likely than its opposite: thermal contraction. Why, then, do Dr. Webb and his colleagues think that early Earth’s lithosphere experienced thermal expansion?
“The answer lies in consideration of major heat-loss mechanisms that could have occurred during Earth’s early periods,” said Dr. Webb. “If volcanic advection, carrying hot material from depth to the surface, was the major mode of early heat-loss, that changes everything.” Dominance of volcanism would have an unexpectedly chilling effect on the Earth’s outer shell, as documented in Dr. Webb and co-author Dr. William Moore’s earlier work (published in Nature in 2013).
This is because new hot volcanic material taken from Earth’s depths would have been deposited as cold material at the surfacethe heat would be lost to space. The evacuation at depth and piling up at the surface would have eventually required that the surface material sank, bringing cold material downwards. This continual downward motion of cold surface material would have had a chilling effect on the early lithosphere. Because Earth was cooling overall, the heat production and corresponding volcanism would have slowed down. Correspondingly, the downwards motion of lithosphere would have slowed with time, and thus even as the overall planet cooled, the chilled lithosphere would have been increasingly warmed via conduction from hot deep material below. This warming would have been the source of the thermal expansion invoked in the new model. The new modeling illustrates that if Earth’s solid lithosphere is sufficiently thermally expanded, it would fracture, and the rapid growth of a fracture network would divide the Earth’s lithosphere into plates.
Dr. Webb and his colleagues continue to explore the early development of our planet, and of the other planets and moons in the solar system, via integrated field-based, analytical, and theoretical studies. Their field-based explorations bring them to far-flung sites in Australia, Greenland, and South Africa; their analytical research probes the chemistry of ancient rocks and their mineral components; and their theoretical studies simulate various proposed geodynamic processes. Together, these studies chip away at one of planetary science’s greatest remaining mysteries: How and why did Earth go from a molten ball to plate tectonics?
More information:
C. A. Tang et al. Breaking Earth’s shell into a global plate network, Nature Communications (2020). DOI: 10.1038/s41467-020-17480-2
Citation:
A new idea on how Earth’s outer shell first broke into tectonic plates (2020, July 20)
retrieved 20 July 2020
from https://phys.org/news/2020-07-idea-earth-outer-shell-broke.html
This document is subject to copyright. Apart from any fair dealing for the purpose of private study or research, no
part may be reproduced without the written permission. The content is provided for information purposes only.