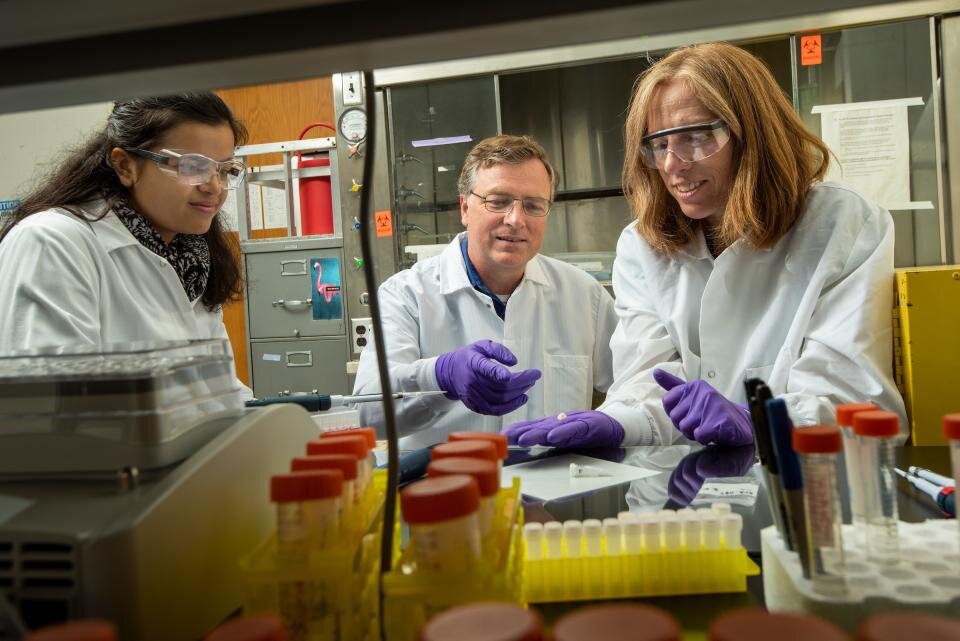 A new method for estimating the biological sex of human remains based on reading protein sequences rather than DNA has been used to study an archeological site in Northern California. The protein-based technique gave superior results to DNA analysis in studying 55 sets of human remains between 300 and 2,300 years old. The work is published July 17 in Scientific Reports.
The method targets amelogenin, a protein found in tooth enamel, said first author Tammy Buonasera, postdoctoral researcher working with Glendon Parker, adjunct associate professor in the Department of Environmental Toxicology at the University of California, Davis. The technique was developed in Parker’s laboratory.
Buonasera, Parker, Jelmer Eerkens, professor of anthropology, and colleagues compared three methods for sex determination: the new proteomic method; DNA analysis; and osteology, or analysis of the size, shape and composition of the bones themselves. They applied these methods to remains from two ancestral Ohlone villages near Sunol, California. The site is being excavated by the Far West Anthropological Research Group of Davis in collaboration with the Muwekma Ohlone tribe.
Amelogenin is a protein found in tooth enamel, the hardest and most durable substance in the human body. The gene for amelogenin happens to be located on both the X and Y sex chromosomes, and the amelogenin-Y protein is slightly different from amelogenin-X.
The method works by retrieving a tiny amount of protein from a tooth. All proteins are made up of a chain of amino acids, so the protein is analyzed to give the amino acid sequence, which then defines the protein. Each of the 20 naturally occurring amino acids is specified by a three-letter code in DNA, so it is possible to work backward from the amino acid sequence and figure out the likely DNA code.
Superior to existing methods
The researchers were able to determine the sex of all of the remains using the new protein method and all but five using DNA methods. Results from osteology and proteomics agreed in almost all cases, although examining bones themselves was only effective for about half the skeletons.
The protein method allowed them to estimate sex for children, which is not possible from osteology. It was reliable even when the signal from DNA was weak.
“This is a more sensitive technique for older skeletons where we would expect more DNA degradation,” Parker said.
Being able to determine the biological sex of human remains provides a greater window into the persona of each individual. Anthropologists are interested in determining biological sex because sex interacts with health and can have a large impact on how people form an identity and are treated within a society, Eerkens said.
“Almost every human society around the world incorporates sex and gender as a way to classify people, and these can affect your status and who you associate with in society,” Eerkens said. While gender and biological sex are not the same thing, they are linked, so the ability to estimate sex gives archeologists important insight when attempting to understand the cultural aspects of gender, which are not as readily preserved.
For example, in a society based on small villages, people often have to find mates outside their village. Depending on cultural rules, either men or women will leave the village to marry.
More information:
Tammy Buonasera et al. A comparison of proteomic, genomic, and osteological methods of archeological sex estimation, Scientific Reports (2020). DOI: 10.1038/s41598-020-68550-w
Citation:
Archaeologists use tooth enamel protein to show sex of human remains (2020, July 20)
retrieved 20 July 2020
from https://phys.org/news/2020-07-archaeologists-tooth-enamel-protein-sex.html
This document is subject to copyright. Apart from any fair dealing for the purpose of private study or research, no
part may be reproduced without the written permission. The content is provided for information purposes only.