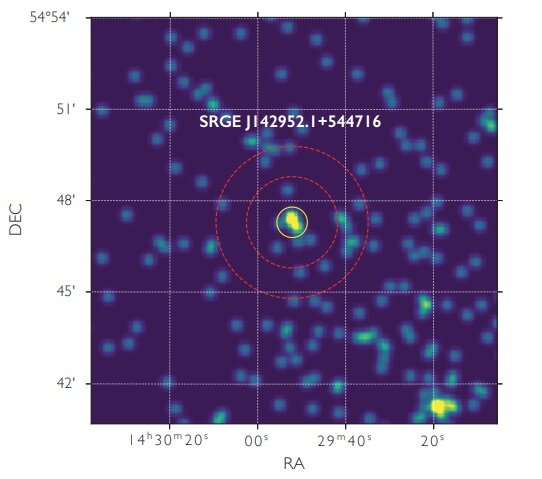 Using the Spektr-RG (SRG) spacecraft, Russian astronomers have investigated a sample of distant quasi-stellar objects (QSOs), or quasars. They report the detection of strong X-ray emissions from such source designated CFHQSJ142952+544717, the most X-ray luminous high-redshift quasar known to date. The finding is reported in a paper published July 9 on arXiv.org.
Quasars are extremely luminous active galactic nuclei (AGN) containing supermassive central black holes with accretion disks. Their redshifts are measured from the strong spectral lines that dominate their visible and ultraviolet spectra. All observed quasar spectra have redshifts between 0.056 and 7.54.
Astronomers are especially interested in finding new high-redshift quasars (with redshift above 6.0) as they are the most luminous and most distant compact objects in the observable universe. Spectra of such QSOs can be used to estimate the mass of supermassive black holes that constrain the evolution and formation models of quasars. Therefore, high-redshift quasars could serve as a powerful tool to probe the early universe.
Now, a group of researchers led by Pavel Medvedev of the Space Research Institute of the Russian Academy of Sciences, has found that one known QSO, CFHQSJ142952+544717 (classified as a radio-loud quasar at a redshift of approximately 6.18), also exhibits significant X-ray emission. The finding was made using the eROSITA telescope onboard the Spektr-RG satellite as part of an all-sky survey.
“We report the discovery of X-ray emission from CFHQSJ142952+544717, the most distant known radio-loud quasar at z = 6.18, on Dec. 1011, 2019 with the eROSITA telescope onboard the SRG satellite during its ongoing all-sky survey,” the astronomers wrote in the paper.
Apart from being radio loud, CFHQSJ142952+544717 is also X-ray bright in comparison to the majority of quasars. The X-ray luminosity of CFHQSJ142952+544717 was measured at approximately 26 quattuordecillion erg/s in the 2.0-10 keV energy band. This means that the object is the most X-ray luminous quasar ever observed at a redshift above 6.0.
The bolometric luminosity of CFHQSJ142952+544717 was estimated at between 200 and 300 quattuordecillion erg/s. This makes it one of the most extreme quasars known at redshifts greater than 5.7. Moreover, assuming that the bolometric luminosity does not exceed the Eddington limit, it suggests the mass of the supermassive black hole in the quasar must be at least 1.5 billion solar masses.
Trying to explain the high X-ray brightness of CFHQSJ142952+544717 relative to the optical/ultraviolet emission, the astronomers suppose that it may be linked to the quasar’s radio loudness.
“It may be related to its radio loudness, specifically to a plausible contribution of inverse Compton scattering of high-energy-density [due to the (1 + z)4 2.7 × 103 cosmological factor] CMB photons off relativistic electrons in the jets,” the authors of the paper explained.
The researchers noted that if this scenario is true, Spektr-RG may uncover many more high-redshift radio-loud quasars during its ongoing mission.
More information:
SRG/eROSITA uncovers the most X-ray luminous quasar at z>6, arXiv:2007.04735 [astro-ph.HE] arxiv.org/abs/2007.04735
© 2020 Science X Network
Citation:
Astronomers discover the most X-ray luminous high-redshift quasar (2020, July 20)
retrieved 21 July 2020
from https://phys.org/news/2020-07-astronomers-x-ray-luminous-high-redshift-quasar.html
This document is subject to copyright. Apart from any fair dealing for the purpose of private study or research, no
part may be reproduced without the written permission. The content is provided for information purposes only.