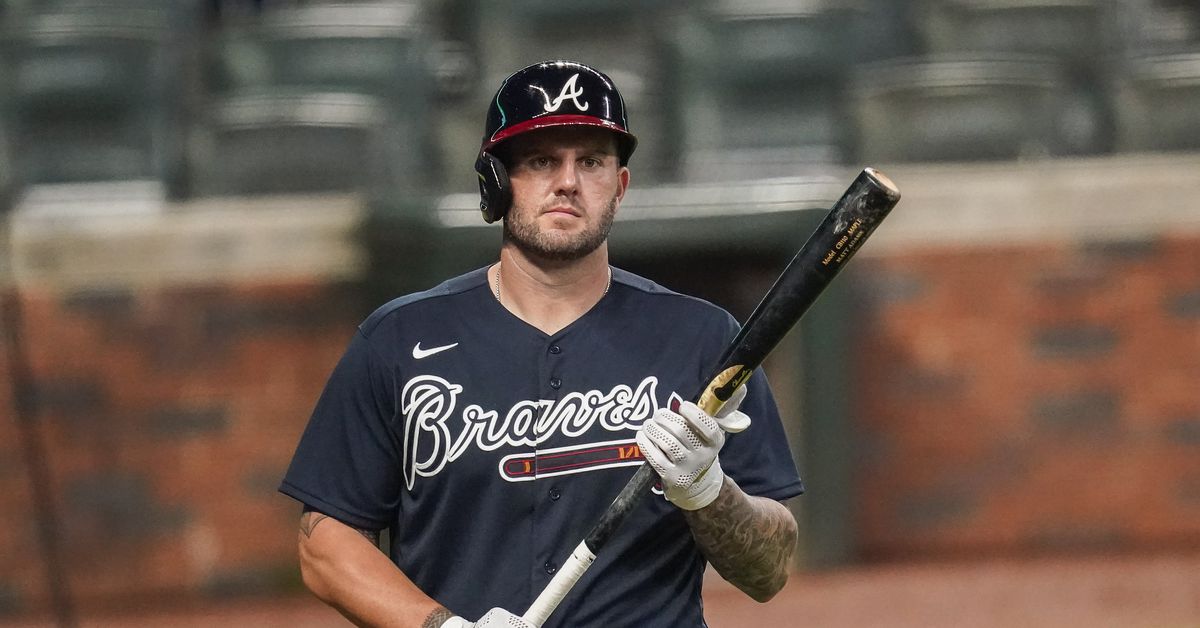 Atlanta Braves baseball officially returned Tuesday night with an eight-run eighth inning and a walk-off home run by Matt Adams in a 10-9 exhibition win over the Miami Marlins.
It was all Marlins early on as they built a giant lead against Mike Foltynewicz, making his last warm-up start.
The outing was a mixed bag all the way around for Foltynewicz, who said that his main concern was getting his 75 pitches in and working on his changeup. He cruised through the first two innings while allowing just one baserunner, then ran into big time trouble in the third as Jorge Alfaro, Miguel Rojas and Jonathan Villar connected on back-to-back-to-back homers to give Miami a 3-0 lead.
Foltynewicz struck out two in a scoreless fourth but ran into trouble in the fifth. Alfaro led off with a single and Rojas followed with a chopper that deflected off of Foltynewiczs glove for an infield hit. Dansby Swanson then made a sliding stop on a grounder by Villar but his throw sailed high and pulled Ozzie Albies off the bag at second to load the bases.
Brian Anderson grounded to Austin Riley at third for a forceout, but Corey Dickerson followed with a single to center that scored two runs to make it 5-0. Jesus Aguilar then dumped in another single that scored Anderson to make it 6-0, ending Foltynewiczs night.
Foltynewicz exited after throwing 69 pitches over 4 1/3 innings, allowing nine hits and six earned runs. He struck out four and didnt walk anyone. He displayed a good slider at times but left some breaking balls up and over the plate. His velocity did appear to be off with his fastball sitting somewhere between 89-91 mph. However, he wasnt terribly concerned about where his velocity was.
Im throwing the ball fine. Its never fun throwing in the rain for five innings. My cleats were a mess, couldnt get a grip of the ball, Foltynewicz said after exiting. My fastball is coming out where it needed to be so Im not worried about that.
Atlanta finally got on the board in the sixth inning when Freddie Freeman worked a two-out walk and scored from first on a double off the wall by Marcell Ozuna to make it 6-1.
Josh Tomlin and Tyler Matzek combined for 2 2/3 scoreless innings in relief of Foltynewicz before Miami extended their lead against reliever Chris Rusin in the eighth. Rusin immediately ran into trouble, walking Garrett Cooper to lead off the inning. Sean Rodriguez doubled to put runners at second and third. Rusin then struck out Jon Berti for the first out but allowed a double to former Brave Francisco Cervelli that extended the lead to 8-1. He escaped further damage as Monte Harrison lined into a double play to end the inning.
Things would get interesting from there. Robert Dugger retired William Contreras with a ground out and then issued back-to-back walks to Adam Duvall and Yangervis Solarte. Freeman followed with a single that scored Duvall to make it 8-2. That would bring 2019 draft pick Michael Harris to the plate; Harris worked a 3-2 count and reached on an infield single. Solarte scored on the play to cut the deficit to 8-3.
That would be the end of the night for Dugger as Don Mattingly summoned Adam Conley from the bullpen. Conley came in and immediately walked Matt Adams. After a wild pitch scored Freeman to make it 8-4, Conley walked Yonder Alonso to load the bases. Charlie Culberson would make him pay, driving a double into the gap that cleared the bases and made it a one-run game at 8-7. Drew Waters followed with a double of his own that scored Culberson to tie the game.
Contreras then struck out for the second out of the inning, but Adam Duvall delivered a single to left that scored Culberson to give Atlanta the lead for the first time all game. However, the lead wouldnt last long: Chad Sobotka allowed a long home run to Jesus Sanchez with one out in the ninth to tie things back up at 9-9.
Alex Vesia struck out Braden Shewmake and Harris to open the ninth, but Matt Adams jumped on an 0-1 fastball and drove it out to right for the walk-off winner.