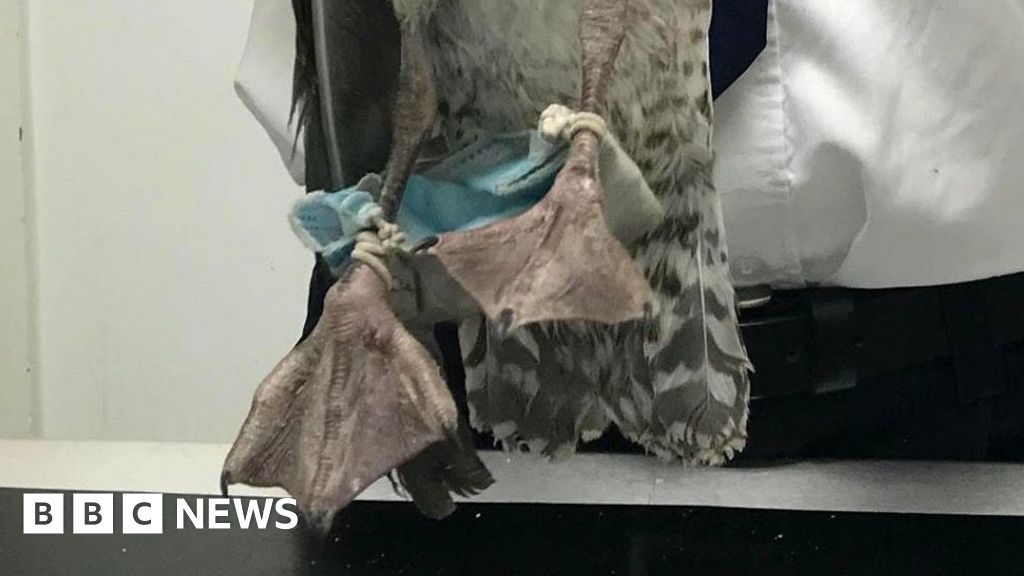 Image copyrightRSPCAImage caption
The elastic straps on the face covering had become increasingly tight around the gull’s legs
A gull has been rescued after its legs became trapped in the elastic of a disposable face mask for about a week.
It was spotted struggling to walk in Chelmsford, in Essex, by staff at a car showroom, but when they tried to get close, the bird managed to fly off.
By Saturday it could only “stumble and fall as the poor thing had a disposable Covid face mask tangled around both legs” an RSPCA officer said.
The charity asked people to responsibly dispose of any PPE they might be using.
Staff at the car company in Argyll Road called the charity at the weekend after they became “increasingly concerned” because the gull had been sitting “in the same spot for hours and didn’t appear to be moving”, the RSPCA’s inspector Adam Jones said.
Image copyrightRSPCAImage caption
By the time it was rescued the gull could only hop, stumble and fall over
Although it tried its best to get away from Mr Jones, the mask had become more tightly wound around the gull and it could no longer fly.
“It’s clear the mask was there for some time and the elastic straps had tightened around his legs as his joints were swollen and sore,” he said.
The bird was taken to the RSPCA’s South Essex Wildlife hospital where staff cut the mask off.
“Thankfully, he’s been doing well and is being monitored closely,” said Mr Jones.
“They’ve now released him out into an aviary with other gulls and, when the group is ready, they’ll all be released together.”
The charity believes that “now face masks are compulsory for many situations, there will be more and more being irresponsibly discarded and wild animals and birds will become tangled in the elastic straps”.
“I’m concerned that this gull could be the first of many victims now that face masks are the norm,” Mr Jones added.