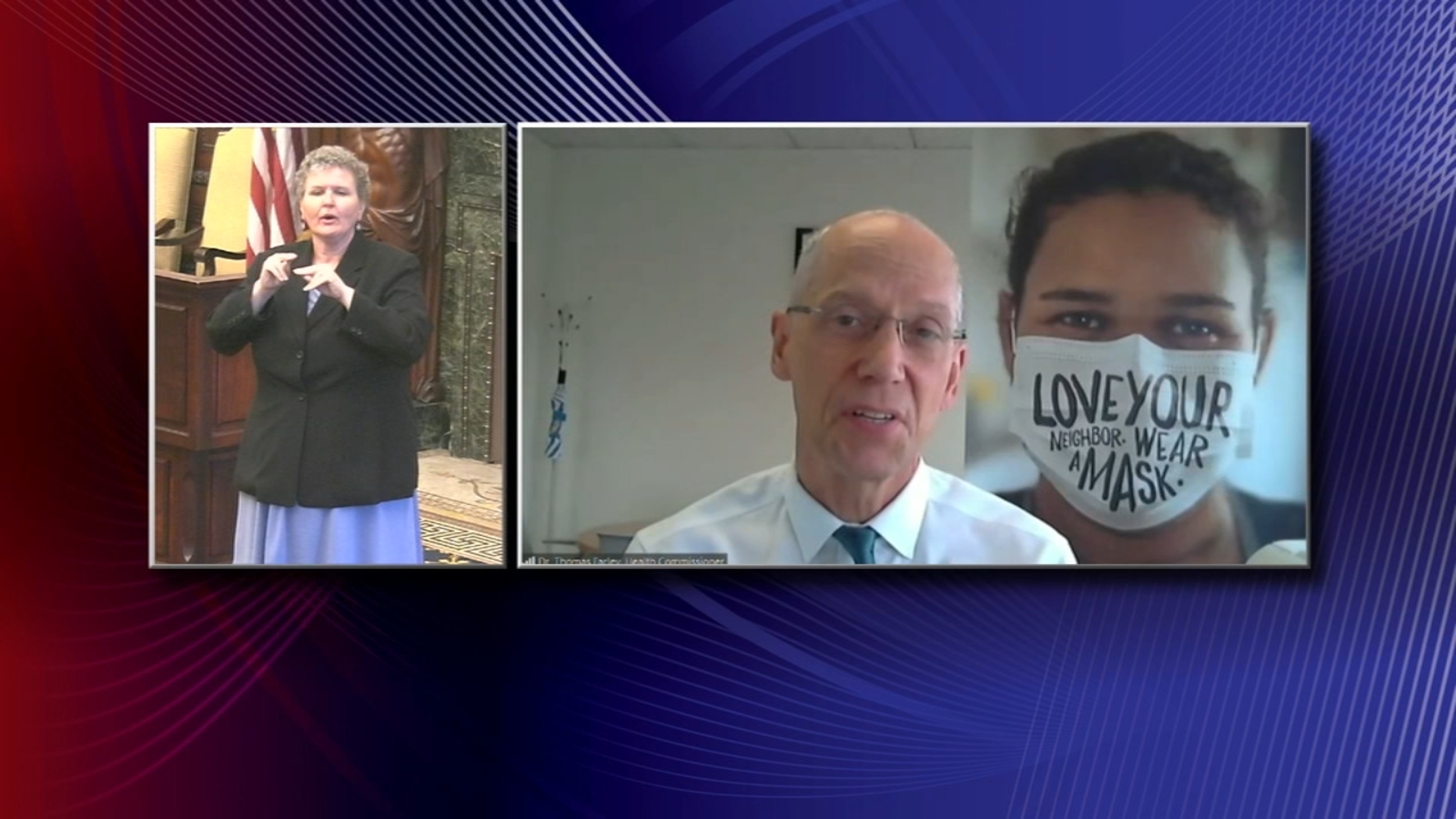 PHILADELPHIA (WPVI) — The coronavirus has been in the world for about eight months and the top Philadelphia health official thinks in order to combat it further, we need to take a step back and see where we’ve been.With the COVID-19 pandemic increasing across the United States, Philadelphia health commissioner Dr. Thomas Farley said Tuesday, “(It’s) not over. The virus is still here.”
Farley said the virus causes a wide-range of a severity of illness, “more so than any other virus I am aware of.”Many people, maybe even most, he said, have no symptoms whatsoever and may not even know they had the infection.
Of those who know they have the infection, it’s mostly mild symptoms.
“However, there is a very small percentage of people who have severe symptoms or can even have a fatal infection,” Farley said.
The health commissioner said this is strongly linked to a person’s age. People with advanced age and people with chronic medical conditions are at much higher risk, Farley said.
Overall, approximately 70% of the COVID-19 related deaths in Philadelphia are in people over the age of 70. About 90% are over the age of 60.
“We know at the individual level that wearing a mask, keeping distance from people, and having barriers, and other safety precautions can be very protective, if people use them consistently,” Farley said.
RELATED:Here’s what happens to oxygen levels when you wear a mask
Health officials learned if the city does a complete lockdown, the infection rates fall. That’s what happened in March. Farley noted about mid-April, the number of virus cases peaked and they then started to go down.
However, Farley said, that success comes with a price.
“With that lockdown, you also see businesses that are hurt or they fail; layoffs or furloughs of staff; surges of unemployment; social problems; and difficulty for everybody to get things done, from basic shopping to haircuts to educating our children,” Farley said.He said, along with the virus, unemployment – which leads to poverty – also kills.
But Farley said, if they did nothing, ignored the virus, and let all activities commence, they know the virus surges and the deaths do as well.
“That’s what happened in Florida. That’s what happened in Georgia. That’s what we don’t want to have happen here in Philadelphia,” Farley said.
He said so officials in the city and across the country are trying to seek a balance – allowing some activities to continue while limiting the spread of the virus.
The city has allowed people to walk on trails and go to stores with masks, but have prohibited indoor dining and movie theaters.
RELATED:What to know as Philadelphia puts pause on some reopening plans
Farley focused on restaurants and bars, saying they have been the “driving factor” behind the major rise in cases in the south and west.
“Philadelphia did not open restaurants’ indoor dining when most of the United States and the rest of Pennsylvania did. In retrospect, I think that was the right decision,” Farley said.
He took a moment to clarify the city’s guidance for school sports. While the guidelines do not prohibit competition between teams, the health department strongly recommends against it because of the close exposure of the participants involved and mixing people from different neighborhoods. They recommend teams focus on athletic skill building instead of competitions.
Whether it’s a game or training, all teams must follow the city’s rule of fewer than 50 people at one time, including players, coaches, and referees, and no spectators.Farley said social distancing is only 1/3 of the plan to combat COVID-19. The other two parts are containment which involves testing and contact tracing, and protecting the vulnerable populations.
“So what does the future look like from here?” Farley rhetorically asked.
His response: If case rates rise, the city may have to close some activities again. He said he’d rather not do that, but would be forced to if the number of cases rise. If case rates fall, the city may gradually allow the activities which remain closed under the modified green phase to reopen. If cases rates are stable, the city will stay how it is at this point concerning what is allowed and safety guidelines.
“Let’s be honest, we may have cycles of opening and closing as the (pandemic) changes around us as we learn more over the next few months,” Farley said.
He said all this will continue until there is a vaccine.
Farley said he knows “this isn’t very satisfying”‘ and people just want the virus to go away.
But he said the virus is not going away anytime soon. He said it will take a combination of actions to keep COVID-19 under control.
“I do think, though, if we do that, we can live with it,” Farley said.
He said, eventually, we will be able to put this all behind us.