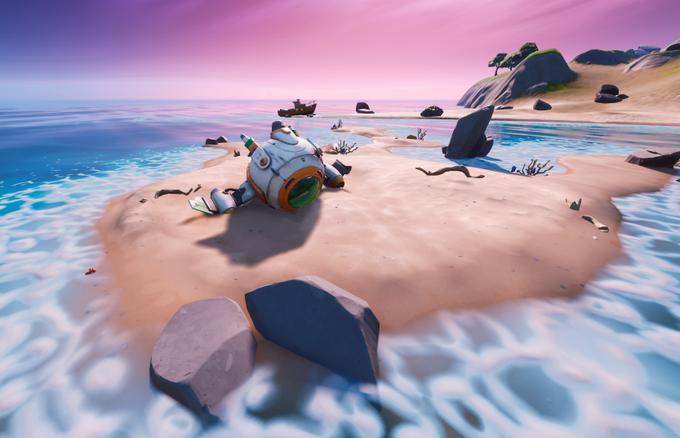 Crash Site
FortTory
Well, there wasnt a whole lot that actually happened in-game in Fortnites big patch today. Cars were supposed to be added but were apparently shelved at the last minute, so the only really interesting stuff came from datamining future weeks.
From leaker FortTory comes the reveal of an ancient spaceship, a new POI and in-game model that is a bit of a mystery, and could be a sign of whats to come in future seasons of the game.
The spaceship and POI were added in the backend of the patch, but are not live in-game now. I checked. Heres what the Crash Site POI is supposed to look like on the map, just off the northern coast near Craggy Cliffs:
Crash Site
FortTory
Heres what it actually looks like right now:
Crash Site?
Me
In short, we need the water to go down more in order to see it.
Before everyone gets too excited about an alien invasion, we know that the ship is actually piloted by someone we already know in the game. That would be Siona, the battle pass skin from this season who has a helmet on/off astronaut outfit.
The ship
Epic
We can see this ship in the loading screen of season 3, though no one has really noticed it before. So its piloted by her, not aliens. Well, maybe shes an alien? Theres also a male astronaut model that has leaked as well, so perhaps that was her co-pilot in the two-seater ship.
This is not, however, just one-off easter egg, however. There are actual Ancient Astronaut challenges tied to this ship whenever it does arrive. And those are:

Kind of a weird set of challenges when it ends with stop ship launch, but well see where this goes. With nothing else really going on across the map, this does seem like something that could lead into future Fortnite seasons.
One place Fortnite has not really gone yet is space. We had the Visitor crash land from his little meteor pod, but that was it. But if Siona arrived on an ancient space ship, that raises questions about who she is and where shes from, and if someday we could get actual aliens in Fortnite, if Siona isnt a human-looking alien herself, I suppose. Maybe she time traveled from the future? Who knows.
Regardless, this is the first interesting thing Ive seen dug up in Fortnite in a while, as this has otherwise been a pretty tepid season with the only map changes being the water level going down. If this tiny ship is being revealed soon, I wonder what else might be uncovered by the time we reach the end.
Follow me on Twitter, YouTube and Instagram. Pick up my sci-fi novels Herokiller and Herokiller 2, and read my first series, The Earthborn Trilogy, which is also on audiobook.