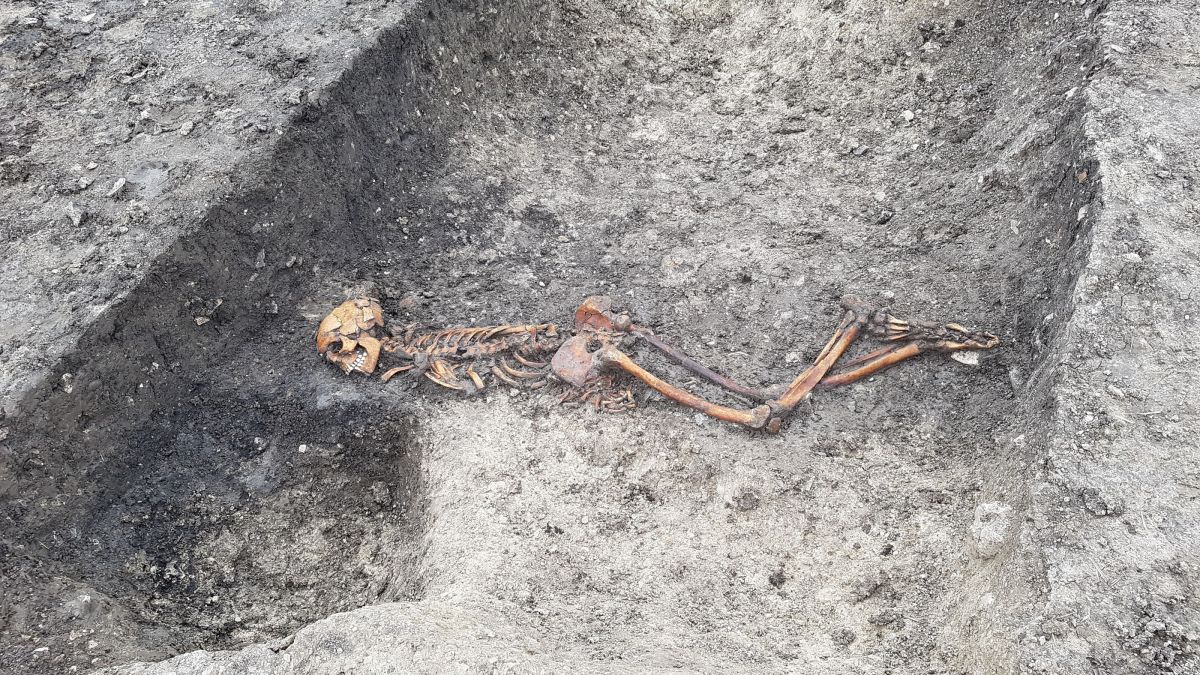 The ancient skeleton of a man thrown face-down into a ditch with his hands bound in front of him has been unearthed just outside of London. The man may have been the victim of an Iron Age murder or execution.
Though archaeologists aren’t certain how the man died, his strange burial has them suspecting foul play was involved more than 2,500 years ago.
His hands were found together and trapped beneath his pelvis, though any bindings have now rotted away. He didn’t have a grave, and archaeologists found no sign of a coffin.
Related: In photos: Boneyard of Iron Age warriors
“He seems to have had his hands tied, and he was face-down in the bottom of the ditch,” said archaeologist Rachel Wood, who led the excavation for the high-speed rail developer HS2. “There are not many ways that you end up that way.”
Scientists are now examining the skeleton to learn more about the man’s death, Wood told Live Science. Pottery fragments found in the ditch could help them pin down when exactly the man died.
“If he was struck across the head with a heavy object, you could find a mark of that on the back of the skull,” she said. “If he was stabbed, you could find blade marks on the ribs. So we’re hoping to find something like that, to tell us how he died.”
Wood and her colleagues made the gruesome find at Wellwick Farm near Wendover, about 15 miles (25 kilometers) north-west of the outskirts of London, where a rail tunnel will be built along the route through the Chiltern Hills. The farm lies less than a mile from the Icknield Way
— an ancient road, now mostly footpaths, that runs along the tops of the Chiltern Hills and has been used as a route since prehistoric times.
The area is covered with ancient sites, and there’s evidence at Wellwick Farm of more than 4,000 years of human occupation, from the Neolithic
until the Medieval periods, Wood said.
Image 1 of 4
Archaeologists found a Bronze Age burial site at Wellwick Farm where high status individuals were buried around a central circular ditch. (Image credit: HS2)
Image 2 of 4
The skeleton of man buried some time in the Roman period, between 1600 and 1900 years ago, was found in lead-lined coffin at the Wellwick Farm site. (Image credit: HS2)
Image 3 of 4
The archaeologists also unearthed traces of a large ceremonial circle of timber posts, up to 5000 years old, that appears to be aligned to the midwinter sunrise. (Image credit: HS2)
Image 4 of 4
The ancient skeleton of a man, believed to be about 2500 years old, was found face-down with his hands apparently bound in front of him. (Image credit: HS2)
Ancient village
At the site of the man’s “burial,” Wood and her colleagues found signs of an ancient village that was occupied from the late Bronze Age, more than 3,000 years ago, until most of southern Britain was invaded and governed by the Roman Empire about 2,000 years ago.
They discovered the remains of animal pens, pits used to store food and at least one roundhouse — a typical British dwelling during the Bronze Age, with a low circular wall of stone or wood, up to 45 feet (15 meters) across, and covered by a conical thatched roof.
Most people moved east away from Wellwick Farm before the Roman period, a swath of the area continued to be used for burials, especially for high-status individuals, Wood said. That burial site — some distance away from the ditch where the suspected murder victim was found — included a circular ditch near the center, about 60 feet (20 meters) across. Nearby, the archaeologists also found an ornate grave from the Roman period, when the Bronze Age burial site would have been covered over by vegetation after several hundred years. This Roman period grave contained an adult skeleton in a lead-lined coffin — the outer coffin, probably made of wood, had now rotted away.
That find suggested the grave’s occupant was someone of especially high status who could pay for an ornate burial, although no grave goods had been found, Wood said.
Ceremonial circle
The archaeologists also unearthed traces of a large ceremonial circle of timber posts, up to 5,000 years old, that appears to be aligned to the midwinter sunrise. (Image credit: HS2)
Among the most remarkable archaeological finds at Wellwick Farm are traces of an enormous ceremonial circle of timber posts to the south of the Bronze Age burial site.
Related: In photos: Ireland’s Newgrange passage tomb and henge
The posts have rotted away and only signs of the postholes remain, but it is thought to date from the Neolithic period up to 5,000 years ago, Wood said.
The ceremonial circle would have stretched 210 feet (65 m) across and consisted of two rings of hundreds of posts, with a gap or entrance to the south-west.
A structure of five posts in the center of the circle aligned with the same gap, which appeared to be the direction of sunrise on the midwinter solstice, she said.
Neolithic timber circles have also been found elsewhere in Britain, including one near Stonehenge
in Wiltshire, which is thought to be of a similar age, Wood said.
The tunnel at Wellwick Farm is part of the HS2 high-speed rail network due to open between London and several northern cities after 2028.
But it’s been a boon for science, as more than 60 archaeological sites along the route are being excavated before construction goes ahead.
Among the finds from the excavations for the HS2 project is the grave of the English explorer who circumnavigated Australia
in the first years of the 19nth century, who was buried in a London churchyard that’s being excavated in London.
Originally published on Live Science.