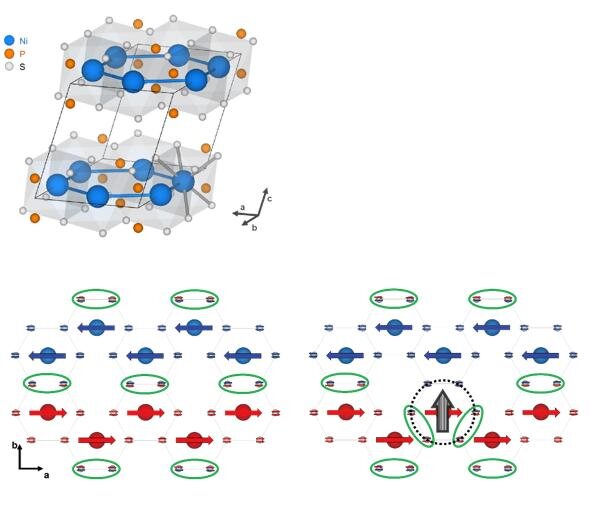 Things can always be done faster, but can anything beat light? Computing with light instead of electricity is seen as a breakthrough to boost computer speeds. Transistors, the building blocks of data circuits, are required to switch electrical signals into light in order to transmit the information via a fiber-optic cable. Optical computing could potentially save the time and energy used for such conversion. In addition to the high-speed transmission, outstanding low-noise properties of photons make them ideal for exploring quantum mechanics. At the heart of such compelling applications is to secure a stable light source, especially in a quantum state.
When light is shone onto electrons in a semiconductor crystal, a conduction electron can combine with a positively charged hole in the semiconductor to create a bound state, the so-called exciton. Flowing like electrons but emitting light when the electron-hole pair gets back together, excitons could speed up the overall data transmission circuits. In addition, plenty of exotic physical phases like superconductivity are speculated as phenomena arising from excitons. Despite the richness of exotic theoretical predictions and its long history (first reported in the 1930’s), much of the physics regarding excitons has been mostly about its initial concept of ‘simple’ binding of an electron and a hole, rarely updated from findings in the 1930s.
In the latest issue of the journal Nature, a research team led by Professor Park Je-Geun of the Department of Physics and Astronomy, Seoul National Universitypreviously Associate Director of the Center for Correlated Electron Systems within the Institute for Basic Science (IBS, South Korea)found a new type of exciton in magnetic van der Waals material, NiPS3. “To host such a novel state of an exciton physics, it requires a direct bandgap and most importantly, magnetic order with strong quantum correlation. Notably, this study makes it the latter possible with NiPS3, a magnetic van der Waals material, an intrinsically correlated system,” notes Professor Park Je-Geun, corresponding author of the study. Prof. Park’s group reported the first realization of exact 2-D magnetic van der Waals materials using NiPS3 in 2016. Using the same material, they have demonstrated that NiPS3 hosts a completely different magnetic exciton state from the more conventional excitons known to date. This exciton state is intrinsically of many-body origin, which is an actual realization of a genuine quantum state. As such, this new work signals a significant shift in the vibrant field of research in its 80 years of history.
These unusual exciton physics in NiPS3 began with bizarrely high peaks spotted in early PL (photoluminescence) experiments done in 2016 by Prof. Cheong Hyeonsik of Sogang University. It was soon followed by another optical absorption experiment done by Prof. Kim Jae Hoon of Yonsei University. Both sets of optical data clearly indicated two points of significant importance: one is the temperature dependence and the other extremely narrow resonant nature of the exciton.
To understand the unusual findings, Prof. Park used a resonant inelastic X-ray scattering technique, known as RIXS, together with Dr. Ke-Jin Zhou at the Diamond Facilities, the UK. This new experiment was critical to the success of the overall project. First, it confirmed the existence of the 1.5 eV exciton peak beyond any doubt. Secondly, it provided an inspiring guide on how we could come up with a theoretical model and the ensuing calculations. This connection between experiment and theory played a pivotal role for them to crack the puzzle in NiPS3.
Using the analytical process shown above, Dr. KIM Beom Hyun and Prof. SON Young-Woo of the Korea Institute for Advanced Study carried out massive theoretical many-body calculations. By exploring massive quantum states totaling 1,500,000 in the Hilbert space, they concluded that all the experimental results could be consistent with a particular set of parameters. When they compared the theoretical results with the RIXS data, it was clear that they came to a full understanding of the very unusual exciton phase of NiPS3. At last, the team could theoretically understand the magnetic exciton state of many-body nature, i.e., a genuine quantum exciton state.
There are several vital distinctions to be made about the quantum magnetic exciton discovered in NiPS3 as compared with the more conventional exciton found in other 2-D materials and all the other insulators having an exciton state. First and foremost, the excitons found in NiPS3 is intrinsically a quantum state arising from a transition from a Zhang-Rice triplet to a Zhang-Rice singlet. Second, it is almost a resolution-limited state, indicative of some kind of coherence present among the states. For comparison, all the other exciton states reported before are from extended Bloch states.
It is probably too early for us to make any definite predictions; it might as well bring on the future of the related field of magnetic van der Waals researches, not to mention our lives. However, it is clear even at this moment that “The quantum nature of the new exciton state is unique and will attract a lot of attention for its potentials in the field of quantum information and quantum computing, to name only a few. Our work opens an interesting possibility of many magnetic van der Waals materials having similar quantum exciton states,” explains Professor Park.
More information:DOI: 10.1038/s41586-020-2520-5 Kang, S., Kim, K., Kim, B.H. et al. Coherent many-body exciton in van der Waals antiferromagnet NiPS3. Nature (2020). DOI: 10.1038/s41586-020-2520-5
Citation:
Quantum exciton found in magnetic van der Waals material (2020, July 20)
retrieved 20 July 2020
from https://phys.org/news/2020-07-quantum-exciton-magnetic-van-der.html
This document is subject to copyright. Apart from any fair dealing for the purpose of private study or research, no
part may be reproduced without the written permission. The content is provided for information purposes only.