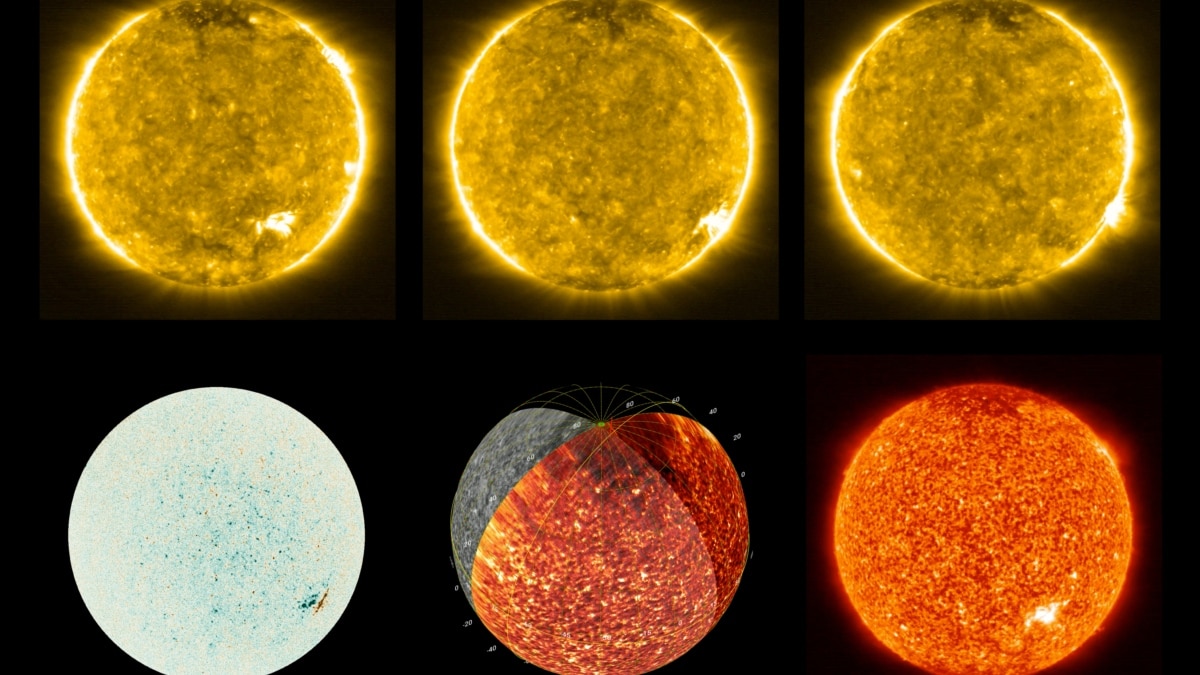 A European and NASA spacecraft has sent back the closest pictures ever taken of the suns surface. They show the surface has thousands of small solar flares, or what scientists are calling campfires.
Scientists released the first images taken by Solar Orbiter last week. The spacecraft was launched from Cape Canaveral, Florida in February.
The orbiter was around 77 million kilometers away from the sun –about halfway between Earth and the sun — when it took the pictures.
Solar Orbiters pictures are the first images from so close to the suns surface. They show colored swirls – bright yellow and dark gray.
Daniel Müller is a European Space Agency project scientist. He told The Associated Press (AP) that the research team had to create a new term for the small flares: campfires.
Müller described the many campfires as quite possibly the tiny cousins of the solar flares that we already know.
These small flares could help explain why the suns outer covering — the corona — is 300 times hotter than the stars surface. But scientists are waiting for more information from Solar Orbiters other instruments to know for sure.
David Berghmans is with the Royal Observatory of Belgium. He was the lead scientist who developed the instrument that took the images. Berghmans told the AP that, When the first images came in, my first thought was, This is not possible – it cant be that good.
He added, It was really much better than we expected, but what we dared to hope for.
The $1.5 billion spacecraft will move even closer to the suns surface in the next two years. The spacecraft will change its orbit as the mission goes on. This will make it possible for Solar Orbiter to take the first pictures of the solar poles.
Solar Orbiter also carries plasma-sampling instruments to offer researchers additional information about the sun.
Project scientist Holly Gilbert notes, That combination [of instruments] really allows us to make links and connections to whats happening on the sun and whats happening at the spacecraft.
Gilbert is with NASA, the U.S. governments civilian space program.
Solar Orbiters main mission of examining the suns polar areas will help researchers understand the causes of solar wind electrically charged particles that go through our solar system. Solar wind can affect satellites and electronics on Earth.
This is just the beginning of the long epic journey of Solar Orbiter, Müller said.
Im John Russell.
The Associated Press and Reuters reported this story. John Russell adapted the reports for VOA Learning English. George Grow was the editor.
_____________________________________________________________
NASA n. short for the National Aeronautics and Space Administration, the government agency responsible for the U.S. civilian space program
solar flare n. a short burst of radiation from the suns surface
swirl v. to flow or move, like the wind, in the space of a circle
cousin n. something related to another
dare v. to be brave enough to face or do something; to not be too afraid to do something
mission n. an important trip or project
pole n. one of two or areas in a magnetized field; either of two related opposites
plasma n. technical a substance that is similar to a gas but that can carry electricity
We want to hear from you. Write to us in the Comments Section.