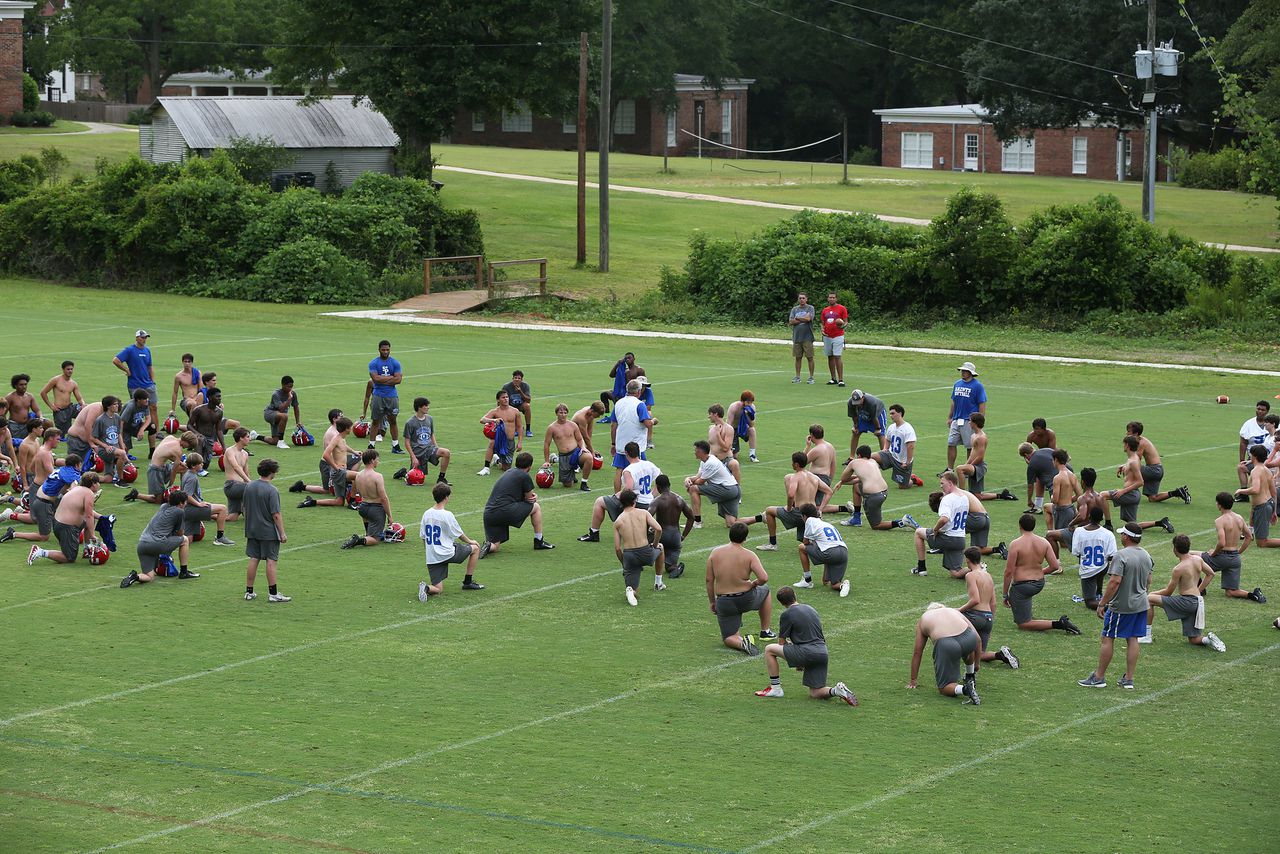 The Alabama high school football season will start on time.
The AHSAAs Central Board of Control approved an on time return-to-play plan at its Wednesday meeting in Montgomery.
Executive Director Steve Savarese consistently has maintained that he was extremely optimistic Alabama teams would start on time unless Gov. Kay Ivey or the state health department ruled otherwise. Savarese will hold a news conference at 1 p.m. Thursday to announce specific details of the return-to-play plan.
Fall sports teams have the option to begin workouts on Monday with the first week used by football for acclimation purposes with helmets and shorts only. The other fall sports volleyball, cross country and swimming and diving can use the first week for acclimation and tryouts. Schools not choosing that option may start fall practice on Aug. 3.
The first contest officially can be Aug. 20.
The purpose of the Return to Play document is to offer AHSAA member schools best practices in order to commence the 2020-21 school year athletic seasons as scheduled and as safely as possible, Savarese said in a news release Wednesday afternoon.
RELATED: Kids need high school football’
Interestingly, 15 Alabama school districts already have opted to start the academic year fully online. No word yet on whether they will delay the starts of their athletic seasons. There is no AHSAA bylaw that prevents virtual students from participating in extra-curricular activities.
I think its an excellent decision, St. Pauls Episcopal football coach and athletic director Steve Mask said of the Boards Wednesday vote. Its well thought out. It is one that takes into account the total student athlete experience. Im excited for all kids in all fall sports.
St. Pauls is scheduled to open its 2020 football season against McAdory at home on Aug. 21. Yellow Jackets coach Bart Sessions also said he agreed with the vote to return to play on time.
Absolutely. 100 percent, Sessions said. I think our entire state you are never in 100 percent agreement I guess but every coach I have interacted with from the Gulf Coast to Tennessee to everywhere in between has been very conscientious of best practices since we got back in June and I think is ready to go. I think one thing weve learned during this pandemic is to take every day as a blessing and enjoy it. That is exactly what we will do at McAdory.
Barry Davenport, a rising senior and college prospect at Chickasaw High, said he feels comfortable with playing this season and is excited to get it started.
Im overwhelmed that we will get to have our senior year, he said. Weve been working hard all summer. Today, we got the answer we wanted. Now Im ready to get it going. I personally believe everything will be safe. I know our coaches have taken all the right steps to sanitize equipment and be as distant as possible, and I think the other teams will do the same. Im very comfortable.
RELATED: Plans for re-opening Alabama K-12 schools
Other states have not been as decisive about moving forward.
California announced Monday it was pushing back the start of its 2020 football season until at least December. It could last through mid-April. That did not seem to be a viable option in Alabama.
We want to protect our other sports also, Savarese said Tuesday at a media day event in Opelika. We dont want to take away from spring sports season. Many of our kids play multiple sports. We want to have as normal a semblance of a season in every sport as we can.
Georgia announced Monday that it was pushing the start of its season back two weeks, a decision that impacts several Alabama teams with Georgia squads on their schedule. After a marathon, five-hour zoom meeting Monday night, the Florida High School Athletic Association Board voted to move forward with starting next week, though multiple Florida counties have announced since they will not start on time due to COVID concerns.
Texas announced Tuesday it was postponing play in its two largest classes for a month, while the other classes will start on time. Later Wednesday, Tennessee announced a flexible plan which could allow teams to start the season as early as Aug. 21 or as late as Sept. 18.
Tennessee is currently under a state of emergency order preventing contact practices of games. The order is set to expire Aug. 29 if not lifted earlier.
The regulations and guidelines the Board passed today go into effect immediately for all sports, said Bernard Childress, Executive Director of the TSSAA. Were hopeful that the prohibition on contact sports will be lifted before Aug. 29, but if its not, the Board of Control has put some policies in place to help keep our kids and communities safe and lay out a roadmap to the start of our football and girls soccer seasons.