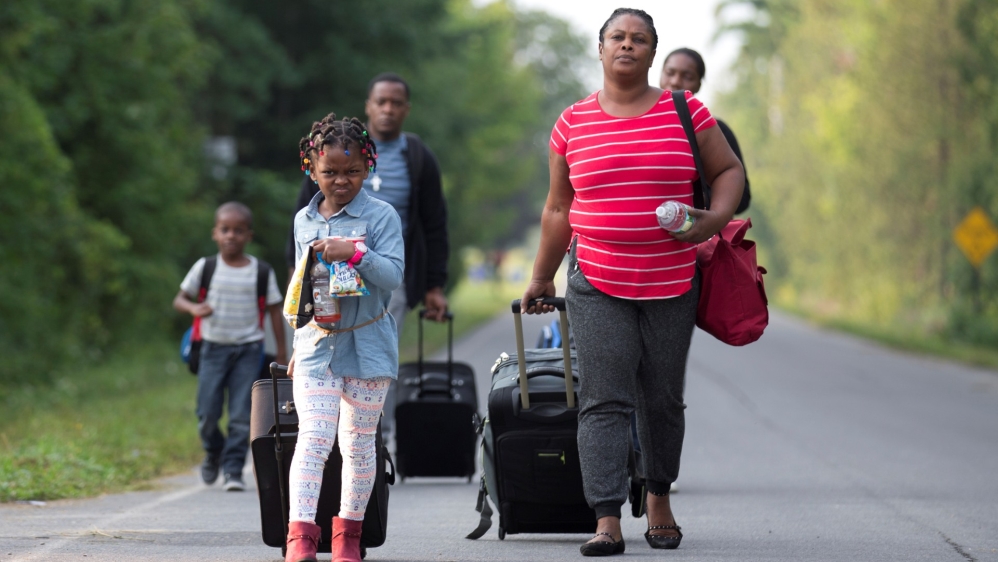 A Canadian court threw out the country’s asylum pact with the United States on Wednesday, ruling that the 2004 agreement was invalid because Washington violates the rights of refugees and asylum seekers.
Under the Safe Third Country Agreement (STCA), people who want to seek refuge in Canada and present themselves at a formal Canada-US border crossing are returned to the US and told to first seek sanctuary there.
Amnesty International, the Canadian Council for Refugees and the Canadian Council of Churches challenged the pact last year, saying the US does not qualify as a “safe” country under President Donald Trump. They cited the widespread detention of asylum seekers who are turned back from Canada as well as the separation of migrant parents from their children by the Trump administration.
In Wednesday’s ruling, Federal Court Justice Ann Marie McDonald said the STCA violated Canadian constitutional guarantees of life, liberty and security, due to the risk of detention that returned asylum seekers face in the US.
She cited the “compelling” case of a Muslim female immigrant from Ethiopia named Nedira Mustefa, who was held in isolation for one week at a US detention centre after being sent back by Canadian authorities.
Mustefa described her time in solitary confinement in the US as “a terrifying, isolating and psychologically traumatic experience,” according to the court ruling.
“Canada cannot turn a blind eye to the consequences that befell Ms Mustefa in its efforts to adhere to the STCA,” the judge wrote in her decision. “The evidence clearly demonstrates that those returned to the US by Canadian officials are detained as a penalty.”
McDonald suspended her decision for six months to give Parliament a chance to respond.
The Canadian government said it was currently reviewing the ruling, with Mary-Liz Power, a spokeswoman for Public Safety Minister Bill Blair noting that the STCA “remains in effect” until January 2021.
The ruling can be appealed to the Federal Court of Appeal and the Supreme Court if necessary.
There was no immediate comment from the US Department of Homeland Security and State.
Mustefa, among those on whose behalf the legal challenge was launched, told Reuters news agency she was relieved.
“At the end of the day, we are all humans,” she said. “No one deserves to be mistreated in such a way.”
Huge victory for @downtownlegal clients! The Federal Court found that the Safe Third Country Agreement with the US violates section 7 of the Canadian Charter of Rights and Freedoms
Read the full decision here https://t.co/SvbxX1twWh
Downtown Legal Services (@downtownlegal) July 22, 2020
The three groups that filed the lawsuit said they welcomed the decision and urged the government of Canada not to appeal. The groups also urged Canada to stop returning refugee claimants to the US immediately.
“The Safe Third Country Agreement has been the source of grave human rights violations for many years, unequivocally confirmed in this ruling,” said Alex Neve, secretary-general of Amnesty International Canada.
“That cannot be allowed to continue one more day.”
Since Trump took office in 2017, more than 50,000 people have crossed the Canada-US border to file refugee claims. Many of them came to the US from Syria, Congo, Haiti and elsewhere, and would cross over to Canada by travelling to upstate New York and then to Roxham Road in the town of Champlain, a backroad that ends at the border.
Under special rules set up by the US and Canada to cope with the COVID-19 pandemic, most of those who cross illegally in either direction are now immediately returned to the other country.
The Canadian Association of Refugee Lawyers said Canada should revisit that decision, given Wednesday’s ruling, and also revoke a 2019 rule that makes individuals ineligible for Canadian asylum if they had already filed for asylum in the US.