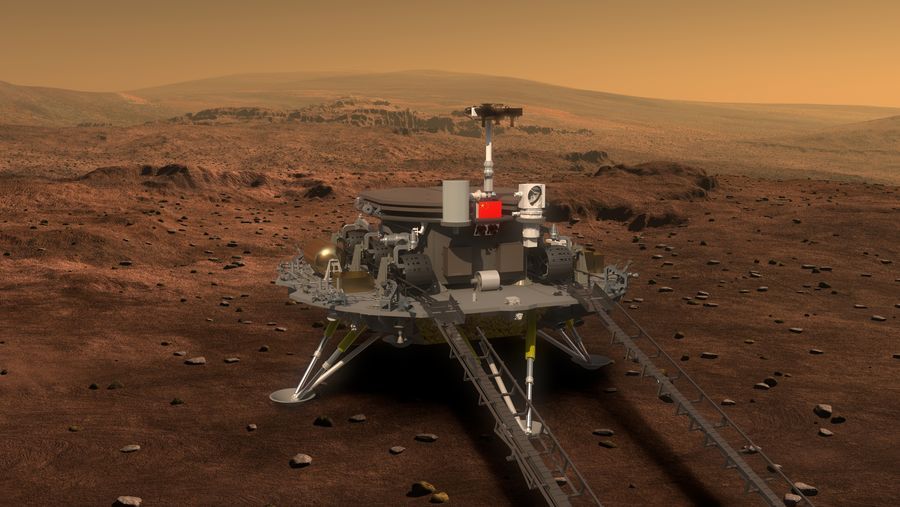 China’s first fully homegrown Mars mission is on its way to the Red Planet.
The Tianwen-1 mission
launched atop a Long March 5 rocket from Hainan Island’s Wenchang Satellite Launch Center this morning (July 23) at 12:41 a.m. EDT (0441 GMT).
Tianwen-1 consists of an orbiter and a lander/rover duo, a combination of craft that had never before launched together toward the Red Planet. The ambition of Tianwen-1 is especially striking given that it’s China’s first stab at a full-on Mars mission. (The nation did launch a Red Planet orbiter called Yinghuo-1 in November 2011, but the spacecraft flew piggyback with Russia’s Phobos-Grunt mission
. And that launch failed, leaving the probes trapped in Earth orbit.)
“Tianwen-1 is going to orbit, land and release a rover all on the very first try, and coordinate observations with an orbiter,” team members wrote in a recent Nature Astronomy paper
outlining the mission’s main objectives. “No planetary missions have ever been implemented in this way. If successful, it would signify a major technical breakthrough.”
Related: Here’s what China’s Tianwen-1 Mars mission will do
Taking the measure of Mars
If all goes according to plan, Tianwen-1 will arrive at the Red Planet in February 2021. The lander/rover pair will touch down on the Martian surface two to three months later somewhere within Utopia Planitia, a large plain in the planet’s Northern Hemisphere that also welcomed NASA’s Viking 2 lander
in 1976.
The solar-powered rover will then spend about 90 Martian days, or sols, studying its surroundings in detail. (One sol is roughly 40 minutes longer than an Earth day.) It will do so with six different science instruments, which the Nature Astronomy paper identified as the Multispectral Camera, Terrain Camera, Mars-Rover Subsurface Exploration Radar, Mars Surface Composition Detector, Mars Magnetic Field Detector and Mars Meteorology Monitor.
The orbiter will eventually settle into a polar elliptical orbit that takes it as close to the Martian surface as 165 miles (265 kilometers) and as far away as 7,456 miles (12,000 km). The spacecraft will relay information home from the rover and collect science data of its own using seven science instruments: two cameras, the Mars-Orbiting Subsurface Exploration Radar, Mars Mineralogy Spectrometer, Mars Magnetometer, Mars Ion and Neutral Particle Analyzer and Mars Energetic Particle Analyzer.
The lander apparently will not do any substantive science work, serving as a delivery system for the rover. That wheeled explorer, by the way, tips the scales at about 530 lbs. (240 kilograms), making it twice as heavy as China’s line of moon-exploring Yutu rovers
.
Overall, Tianwen-1 aims to take Mars’ measure in a variety of ways.
“Specifically, the scientific objectives of Tianwen-1 include: (1) to map the morphology and geological structure, (2) to investigate the surface soil characteristics and water-ice distribution, (3) to analyze the surface material composition, (4) to measure the ionosphere and the characteristics of the Martian climate and environment at the surface, and (5) to perceive the physical fields (electromagnetic, gravitational) and internal structure of Mars,” mission team members wrote in the Nature Astronomy paper.
The paper also explained the mission’s name: Tianwen means “questions to heaven,” and it was taken from the title of a poem by Qu Yuan, who lived from about 340 to 278 BCE.
Related: Occupy Mars: History of robotic Red Planet missions (infographic)
Summer of Mars
Tianwen-1 was the second Mars mission to get off the ground in the last four days.
The United Arab Emirates’ Hope orbiter launched on Sunday
(July 19) to study the Martian atmosphere and climate, streaking into space from Japan atop an H-2A rocket. Like Tianwen-1, Hope (also known as the Emirates Mars Mission) is historic: It’s the first interplanetary mission ever developed by an Arab state.
And the summer of Mars isn’t over yet. NASA’s next Mars rover, the 2,300-lb. (1,040 kg) Perseverance, is scheduled to lift off on July 30.
This clumping of launches is dictated by orbital dynamics; Earth and Mars line up properly for interplanetary missions for just a few weeks once every 26 months. (The European-Russian ExoMars rover was supposed to join the launch party this summer, but it suffered technical issues and now must wait until 2022
.)
Perseverance, the centerpiece of the $2.7 billion Mars 2020 mission
, will hunt for signs of ancient life inside the 28-mile-wide (45 km) Jezero Crater, which harbored a lake and a river delta billions of years ago. Perseverance will do other work as well, including collecting and caching samples for future return to Earth. Mars 2020 will also demonstrate new technologies, such as the first helicopter to ply alien skies and a device designed to generate oxygen from the carbon dioxide-dominated Martian atmosphere.
All three of these missions are scheduled to arrive at the Red Planet in February 2021. So when the summer of Mars comes to an end, we’ll still have a Red Planet winter to look forward to.
Mike Wall is the author of “Out There” (Grand Central Publishing, 2018; illustrated by Karl Tate), a book about the search for alien life. Follow him on Twitter @michaeldwall. Follow us on Twitter @Spacedotcom or Facebook.
Join our Space Forums to keep talking space on the latest missions, night sky and more! And if you have a news tip, correction or comment, let us know at: community@space.com.