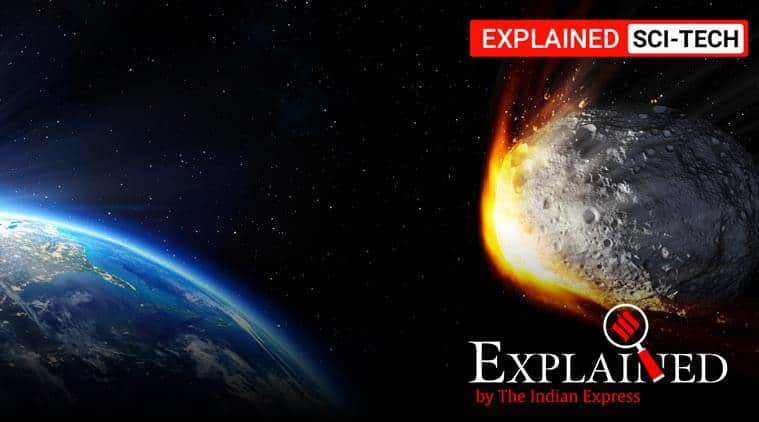 It is not necessary that asteroids classified as PHAs will impact the Earth. (Representational image/ Getty images)NASA has issued a warning that a huge Asteroid 2020 ND will move past Earth on July 24. The asteroid, about 170 metres-long, will be as close as 0.034 astronomical units (5,086,328 kilometres) to our planet, and is travelling at a speed of 48,000 kilometres per hour. Its distance from Earth has placed it in the potentially dangerous category.
Potentially Hazardous Asteroids (PHAs)
According to NASA, Potentially Hazardous Asteroids (PHAs) are currently defined based on parameters that measure the asteroids potential to make threatening close approaches to the Earth. Specifically, all asteroids with a minimum orbit intersection distance (MOID) of 0.05 au or less are considered PHAs.
NASA classifies objects like these as near-Earth objects (NEOs) as they get nudged by other planets gravitational attraction resulting in their proximity to our solar system.
Even so, it is not necessary that asteroids classified as PHAs will impact the Earth. It only means there is a possibility for such a threat. By monitoring these PHAs and updating their orbits as new observations become available, we can better predict the close-approach statistics and thus their Earth-impact threat, NASA says.
The study of near-Earth objects (NEOs)
NEOs are comets and asteroids nudged by the gravitational attraction of nearby planets into orbits which allows them to enter the Earths neighbourhood. These objects are composed mostly of water ice with embedded dust particles, and occasionally approach close to the Earth as they orbit the Sun. NASAs Center for Near-Earth Object Study (CNEOS) determines the times and distances of these objects as and when their approach to the Earth is close.
Express Explained is now on Telegram. Click here to join our channel (@ieexplained) and stay updated with the latest
The level of threat
According to The Planetary Society, there are estimated to be around 1 billion asteroids having a diameter greater than 1 metre. The objects that can cause significant damage upon impacting are larger than 30 metres. Every year, about 30 small asteroids hit the Earth, but do not cause any major damage on the ground.
NASAs Near-Earth Object Observations Program finds, tracks and characterises over 90 per cent of the predicted number of NEOs that are 140 metre or larger (bigger than a small football stadium) which according to the space agency are of the greatest concern due to the level of devastation that their impact is capable of causing. However, it is important to note that no asteroid larger than 140 metre has a significant chance of hitting the Earth for the next 100 years.
Don’t miss from Explained | Series of missions to Mars why, when
Deflecting asteroids
Over the years, scientists have suggested different ways to ward off such threats, such as blowing up the asteroid before it reaches Earth, or deflecting it off its Earth-bound course by hitting it with a spacecraft.
The most drastic measure undertaken so far is the Asteroid Impact and Deflection Assessment (AIDA), which includes NASAs Double Asteroid Redirection Test (DART) mission and the European Space Agencys (ESA) Hera. The missions target is Didymos, a binary near-Earth asteroid, one of whose bodies is of the size that could pose the most likely significant threat to Earth.
In 2018, NASA announced that it had started the construction of DART, which is scheduled to launch in 2021 with an aim to slam into the smaller asteroid of the Didymos system at around 6 km per second in 2022. Hera, which is scheduled to launch in 2024, will arrive at the Didymos system in 2027 to measure the impact crater produced by the DART collision and study the change in the asteroids orbital trajectory.
The Indian Express is now on Telegram. Click here to join our channel (@indianexpress) and stay updated with the latest headlines
For all the latest Explained News, download Indian Express App.