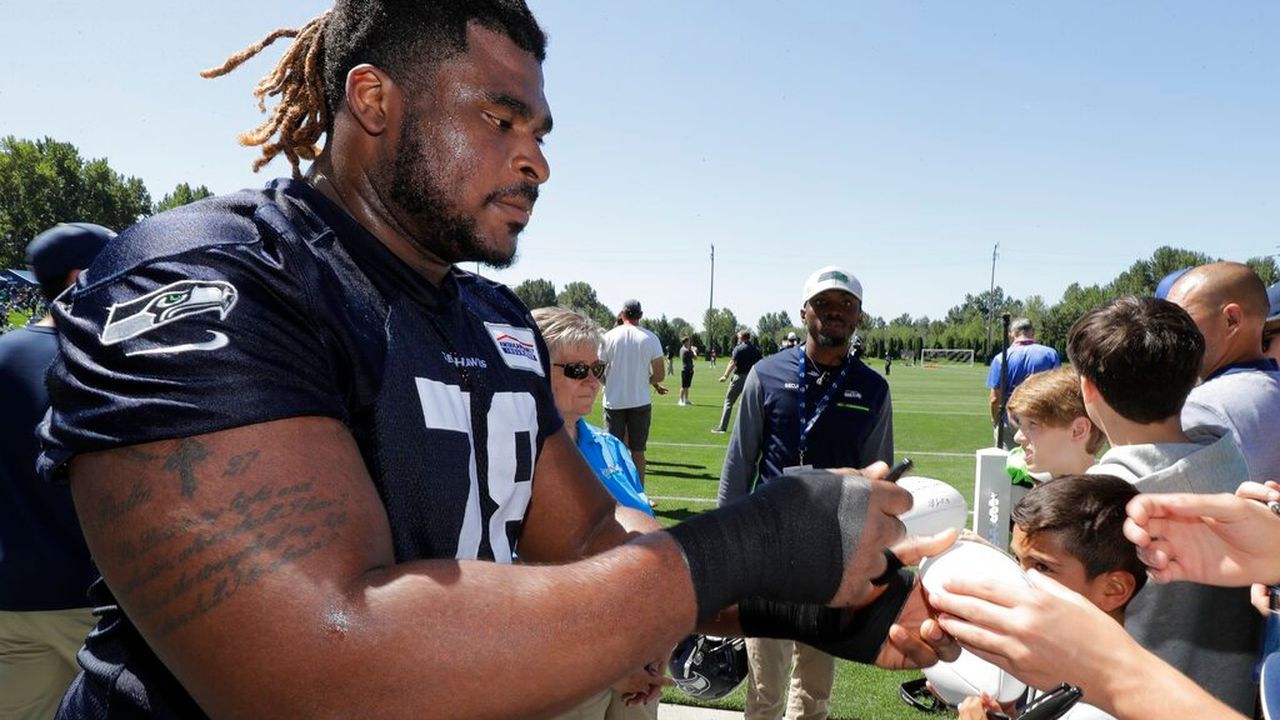 When guard D.J. Fluker reports for training camp with Baltimore next week, the Ravens might not be getting all the player who ended the 2019 NFL season with the Seattle Seahawks.
This week on his Instagram account, Fluker shared workout videos and wrote that hed gone from a 4X shirt to a 2X shirt.
While Fluker didnt provide pounds about any weight lost, in May, his personal trainer, Jacob Rice, shared on his Instagram account that the ugliest man in the NFL had lost more than 30 pounds. Flukers roster weight has remained at 342 pounds.
Fluker played off an old saying to explain the proof is in the salad, not the pudding.
Fluker signed with the Ravens after being released by the Seahawks on April 26.
Fluker had one season remaining on his contract when Seattle let him go after hed started 14 games at right guard in 2019. Fluker had been scheduled to earn a $2 million base salary and a $62,500 bonus for every game he was on the game-day active roster in 2020. Releasing Fluker cut $4,187,500 off Seattles salary cap.
Fluker joined Baltimore on a one-year, $1.075 million contract as a possible replacement at right guard for Marshal Yanda, the eight-time Pro Bowl and two-time All-Pro selection who retired on March 11.
In addition to Fluker, the candidates at right guard include Ben Bredeson, Tyre Phillips and Ben Powers.
A fourth-round choice in the 2019 NFL Draft, Powers played in one game as a rookie. Bredeson and Phillips joined the Ravens in the 2020 draft. Baltimore picked Phillips from Mississippi State in the third round with an eye toward turning the tackle into a guard. Bredeson came from Michigan in the fourth round as a guard who the Ravens think can play center, too.
Fluker has started 88 regular-season games during his NFL career.
After Hurricane Katrina destroyed the home of Flukers family in New Orleans, he prepped at McGill-Toolen in Mobile and Foley before playing for Alabama, where he was the starting right offensive tackle for the Crimson Tides 2011 and 2012 BCS national-championship teams.
Mark Inabinett is a sports reporter for Alabama Media Group. Follow him on Twitter @AMarkG1.
MORE NFL:
· Alabama Roots: Top 10 in NFL tackles
· Wide Receiver U? Got to be Alabama, Jerry Jeudy says
· O.J. Howard, Bucs stepping into the NFLs spotlight
· Alabama Roots: Top 10 in NFL sacks
· Damien Harris surprises his mom with new car
· Upon further review, Broncos safety Kareem Jackson can hit
· Cam Newton makes pitch for PETA
· Madden NFL 21 awards high ratings to state players
· Alabama Roots: Top 10 in All-Pro selections
· Mark Ingram wants safe, efficient, effective return to football
· Tag deadline doesnt concern Arizona Cardinals Kenyan Drake
· Alabama Roots: Top 10 in NFL all-purpose yards
· Alabama Ravens help provide produce in pandemic
· Alabama Roots: Top 10 in NFL touches
· Alabama Roots: Top 10 in NFL total offense
· Derrick Henry on $50 million contract: Just continue to be me
· Alabama Roots: Top 10 in NFL yards from scrimmage
· Cam Newton: Hows me and Belichick going to mesh?