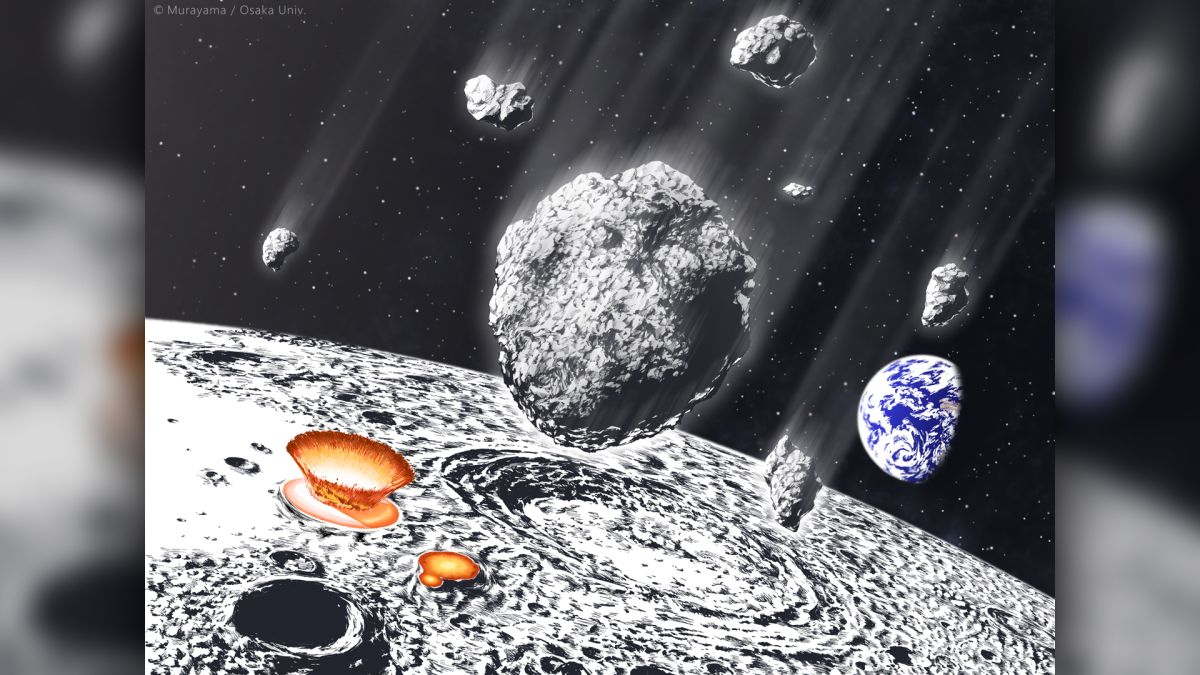 About 800 million years ago, a flurry of small asteroids
slammed into the moon
, pocking the lunar surface with clusters of craters. But the moon wasn’t the only victim of this cosmic bombardment.
If the moon experienced multiple asteroid strikes during this time, its close neighbor and parent planet Earth
was probably also scarred by the same cosmic “storm,” even if time has long since erased all traces of those ancient impacts. And that massive bombardment may have turned Earth into a giant snowball, researchers reported in a new study.
Judging by the size and number of the lunar craters, that asteroid storm would have been substantial. Scientists estimated that the collective heft of the asteroids that hit the Earth and moon may have been up to 60 times the mass of the asteroid that slammed into what is now Mexico and formed the Chicxulub crater, ending the reign of the dinosaurs.
Related: 5 strange, cool things we’ve recently learned about the moon
Even when seen from Earth without much magnification, the moon’s face is marred by thousands of craters, created by whizzing space rocks that pelted the early solar system
. By studying the size and clustering of impact craters on different parts of the lunar surface, scientists can approximate the ages of these scars, a technique known as “crater chronology,” lead study author Kentaro Terada, a professor in the Department of Earth and Space Science at Osaka University in Japan, told Live Science in an email.
For the new study, Terada and his co-authors analyzed lunar data collected by the Japanese space agency’s moonbound mission Selenological and Engineering Explorer (SELENE), launched in 2007. (This probe quickly became known as “Kaguya” after Kaguya-hime, a moon princess in a popular Japanese folktale, Live Science sister site Space.com
reported that year.)
Kaguya mapped the moon’s enigmatic far side
the hemisphere that always faces away from Earth and is sometimes mistakenly called the “dark side” even though it receives sunlight and on Feb. 10, 2009, Kaguya captured a stunning movie of Earth eclipsing the sun
, the first moon’s-eye-view of such an event. Upon the completion of its mission, Kaguya was sent diving into the moon in a controlled crash on June 10, 2009, Space.com
reported.
Scientists suspected that Kaguya’s observations of lunar craters could reveal much about ancient impacts on Earth. Craters on the moon don’t erode as they do on Earth; while asteroid impacts on Earth that are older than 600 million years are weathered into nothingness by volcanic activity
and erosion, very old impacts on the moon remain well-preserved, Terada said in the email.
Scientists interpreted chronology of lunar impacts from the density of smaller craters in the ejecta of the Copernicus crater. (Image credit: NASA (image by Lunar Reconnaissance Orbiter))
From Kaguya’s data, the researchers investigated 59 large lunar craters ranging from 12 to 58 miles (20 to 93 kilometers) in diameter. Then, in the big craters’ ejecta the circle of surrounding material ejected by the impact the study authors counted the number of smaller craters measuring from 300 feet (0.1 km) up to 0.6 miles (1 km) in diameter. Scientists approximate the age of surfaces in the solar system by calculating the density of their craters.
Soil samples were previously collected by the Apollo 11 mission from one of those big craters Copernicus dating it to about 800 million years ago. And eight of the big craters all had similar numbers of smaller craters in their ejecta, hinting that they formed around the same time, probably as a result of an asteroid shower, Terada explained.
As the Earth and moon have coexisted as cosmic partners for approximately 4.5 billion years, “this new finding provides us with crucial insight into the Earth-moon system,” the scientists wrote in the study. “Asteroid showers must have occurred not only on the moon but also on the Earth,” they said.
Because the moon preserves a near-pristine record of these ancient impacts, scientists can look to the moon as “a witness to the history of the solar system,” shedding light on Earth’s long-vanished impact history, Terada said.
Based on the orbits of known asteroid groups around 800 million years ago, the scientists suspected that the storm was caused by a disruption of Eulalia, a rocky, carbon-rich body in our solar system’s asteroid belt, measuring about 25 miles (40 km) in diameter. When the scientists modeled the size and quantity of projectiles that smashed into the moon and Earth, they calculated that the mass of the space debris would have added up to millions of billions of kilograms, according to the study.
This offers an intriguing new perspective on a dramatic climate shift in Earth’s distant past that appeared between 800 million and 700 million years ago, the authors wrote.
During this glacial period, known as “snowball Earth
,” the planet underwent a global deep freeze, with its entire surface blanketed in ice from pole to pole. Scientists suspected  that volcanoes or other “workings of the Earth” led to the big chill, but this new lunar evidence hints that the trigger may have originated in space, and the so-called snowball Earth may have resulted from an asteroid bombardment.
“Lunar crater chronology provides new insight into external forcing from asteroids that might have driven the global environmental change,” Terada said.
The findings were published online July 21 in the journal Nature
.
Originally published on Live Science.

Delta CEO: Over 100 people already on airline’s banned list for refusing to wear a mask | TheHill – The Hill