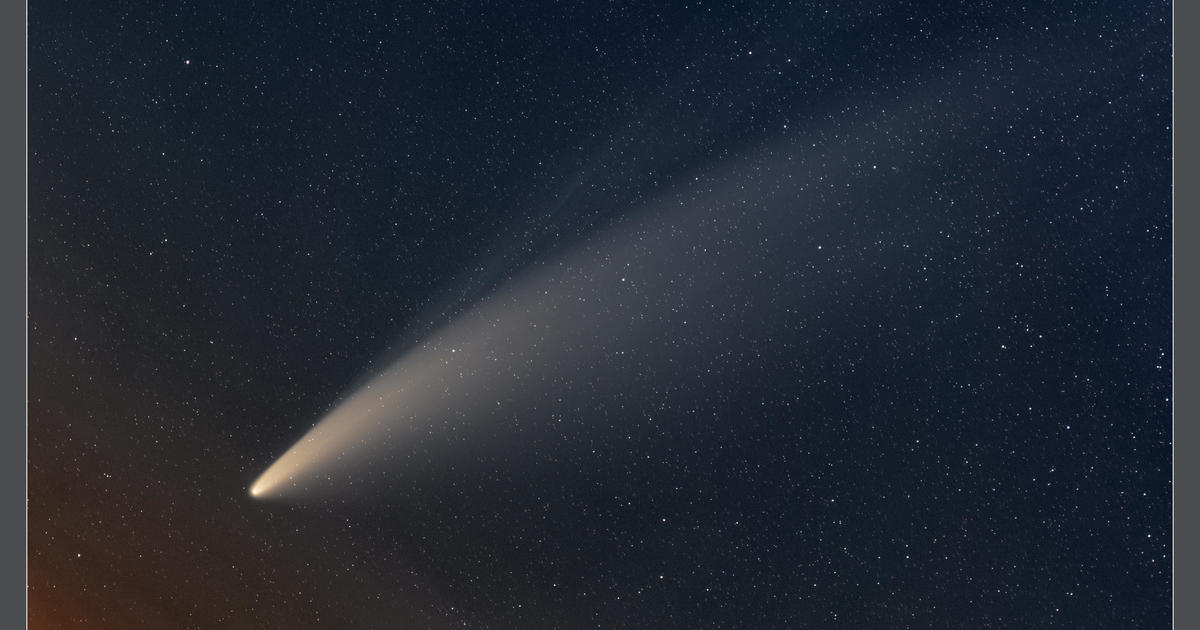 Neowise, one of the brightest comets in decades, has brought with it a stunning debris trail this month, delighting skywatchers around the world. Its closest approach to Earth comes today, July 22, at a distance of about 64 million miles.
Throughout July, the newly-discovered comet, formally named Comet C2020 F3 NEOWISE by NASA, has been visible both in the early hours before sunrise, and later in the evening after sunset. To view it, people in the Northern Hemisphere can look to the northwestern sky, just below Ursa Major, commonly known as the Big Dipper constellation.
Astrophotographers, as well as astronauts aboard the International Space Station, have captured the stunning celestial phenomenon, which will continue to bring spectacular sightings into early August. After that, the comet will begin its journey away from Earth back toward the outer solar system.
The event is truly a once-in-a-lifetime experience — the comet takes about 6,800 years to complete its path around the sun, according to NASA.
Southern California
The National Weather Service shared this photo of Comet Neowise, taken by William T. Reid in Southern California. It was shot from Moorpark, northwest of Los Angeles, looking north to northwest across the Topatopa Mountains.
William T. Reid @stormbruiser
Czech Republic
Comet Neowise streaks above Brno, Czech Republic before daybreak on July 10, 2020.
Miloslav Druckmuller (Brno University of Technology)
Italy
Comet Neowise shining at sunset above the Port of Molfetta in Molfetta on July 11, 2020.
Davide Pischettola/NurPhoto via Getty Image
#DespertarPlanetario ☀️☄️ Cometa NEOWISE sobre la motaña Hochfeiler en los Alpes 🗻📷 Martin Rietze/SWNS.com pic.twitter.com/jsuRYJblyW
— Planetario de Madrid (@PlanetarioMad) July 10, 2020
French Alps
Neowise is seen in the eastern French Alps, along with noctilucent clouds, on July 8, 2020.
Emmanuel Paoly
Hungary
The Comet NEOWISE or C/2020 F3 is seen above Salgotarjan, Hungary, early Friday, July 10, 2020.
Peter Komka/AP
International Space Station
Neowise is seen from the International Space Station on July 5.
NASA, ISS Expedition 63
China
Comet Neowise observed from Beijing, China on July 7, 2020.
Costfoto/Barcroft Media via Getty Images
New York
Neowise (C/2020 F3) over New York City this morning an hour or so before sunrise. pic.twitter.com/8TfMV0sf1j
— Nicholas Isabella (@NycStormChaser) July 9, 2020
New Jersey
Comet Neowise photographed from North Wildwood, New Jersey, on July 8, 2020.
Chris Bakley
Spain
BRIHUEGA, GUADALAJARA, SPAIN – 2020/07/20: Comet Neowise is seen on a clear summer night over a lavender field near the village of Brihuega, Spain, on July 20, 2020.
Marcos del Mazo/LightRocket via Getty Images
Neowise is seen above the mountain of Montserrat, near Barcelona, Catalonia, Spain, on July 9, 2020.
Albert Llop/NurPhoto via Getty Images
Turkey
Neowise is seen above Turkey’s Van province on July 11, 2020.
Ozkan Bilgin/Anadolu Agency via Getty Images
Belarus
A stork stands on a power lines pole as the comet C/2020 F3, known as Neowise, is seen in the sky above the village of Kreva, Belarus, early on July 13, 2020.
SERGEI GAPON/AFP via Getty Images
Canada
Comet NEOWISE and the city of Toronto, Ontario, Canada 🍁! I was up really early for this shot. It’s not often that we get the opportunity to see or photograph a comet of this brightness and with a tail. I hope you like it!🤩 https://t.co/BFyxFFw2DEpic.twitter.com/sGZBiEVryM
— Kerry LH💫 (@weatherandsky) July 5, 2020
Comet NEOWISE shining bright this morning in Huron County, Ontario. Visible to the naked eye! Definitely one worth waking up at 3:30 am for. @c2020f3pic.twitter.com/DO5s9ZyWEn
— Jason O’Young (@jasonoyoung) July 6, 2020
Arizona
No nearby clouds this morning & wound up with the view I was after with Merriam Crater. On any given day that old cinder cone is perfect—then catching it sharing the horizon with this graceful comet gets kind of goosebumpy for me. (Details in next post) #neowise#cometneowisepic.twitter.com/qIVYCFcoMk
— Jeremy Perez (@jperez1690) July 7, 2020
Comet Neowise photographed in #Tucson about an hour ago! #cometneowise#NEOWISEpic.twitter.com/UFYu8Ia0XK
— Sean Parker (@seanparkerphoto) July 8, 2020
Lebanon
Neowise is seen over Lebanon just before sunrise on July 5, 2020.
Maroun Habib (Moophz)
Russia
Neowise streaks across the night sky over the Epiphany Church of the Transfiguration Monastery in Ryazan, Russia on July 13, 2020.
Alexander Ryumin\TASS via Getty Images
United Kingdom
Comet Neowise passes over Stonehenge in the early hours of July 21, 2020 in Salisbury, England.
Dan Kitwood/Getty Images
Neowise passes St Mary’s Lighthouse in Whitley Bay on July 14, 2020.
Owen Humphreys/PA Images via Getty Images
Belarus
Neowise is seen behind an Orthodox church over Turets, Belarus on July 14, 2020.
Sergei Grits / AP
Los Angeles
This photo of #cometNEOWISE taken by @stormbruiser (William Reid) was shot from Moorpark looking north to northwest across the Topatopa Mountains. The comet went behind the mountains around 940 pm.#cawx#laweather#Socalpic.twitter.com/vo761aOsRl
— NWS Los Angeles (@NWSLosAngeles) July 15, 2020
Nevada
Comet Neowise is seen in the sky, above the “Seven Magic Mountains” art installation by artist Ugo Rondinone, in Jean, Nevada on July 15, 2020.
DAVID BECKER/AFP via Getty Images
France
Comet Neowise over the Mont-Saint-Michel in western France on July 22, 2020.
LOIC VENANCE/AFP via Getty Images
Greece
Comet Neowise after the sunset over the fields and hills of Oreokastro, near Thessaloniki in Greece on July 21, 2020.
Nicolas Economou/NurPhoto via Getty Images