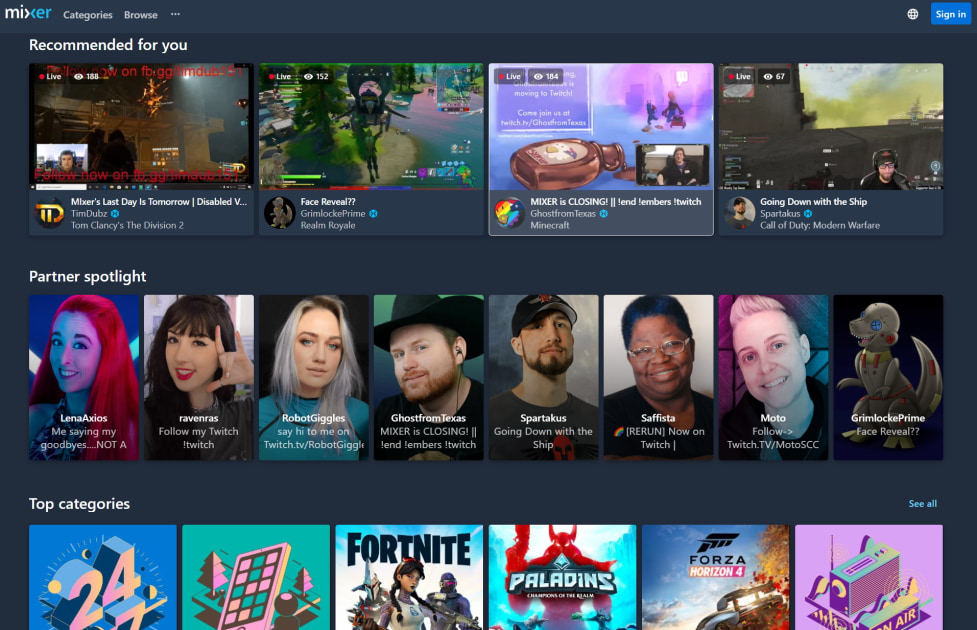 She’s not alone. Featured streamers like RobotGiggles are going from having 47,545 followers on Mixer, to around 6,100 followers on Twitch. LenaAxios will have to walk away from her 122,423 Mixer followers for just 5,900 on Twitch. And for those few streamers who are making the leap to Facebook Gaming, it’ll still be a difficult journey regaining their clout. TimDubz, a pro level partner on Mixer with 25,141 followers currently only has 190 on his Facebook Gaming page.
Of course, these numbers will likely grow as these creators devote more time to their new gaming homes. But for many, it’ll likely take months, perhaps years, to regain their footing. That won’t be a huge deal for casual streamers, but anyone who was actually making a living off of the service will need to hustle for sponsorships and paying gigs.
No matter where they end up, Mixer streamers won’t be able to recreate the feeling of being part of an underdog streaming service. It started out as Beam and gained a reputation for incredibly fast streaming thanks to its “FTL” technology. After Microsoft acquired the company in 2016, it rebadged as Mixer and went to great lengths to compete with Twitch, the incumbent streaming leader. Last year, Microsoft paid leading personalities like Tyler “Ninja” Blevins and Soleil “Faze Ewok” Wheeler to move over to the service exclusively.
Despite how much Microsoft tried, it couldn’t dent Twitch’s market lead. According to data from Streamlabs, Mixer only reached around 81.4 million streaming hours watched, compared to 3.1 billion from Twitch, a billion from YouTube gaming and 553.8 million from Facebook Gaming, the newest challenger. And even a streaming titan like Ninja could only attract 3 million followers on his Mixer account, even though he had amassed 14.7 million on Twitch. As compelling as these personalities are, it seems like many viewers would rather stick with the platform they already know.
Just before Microsoft announced that Mixer would be shutting down, former employee Milan Lee documented his experience with racism at the company on Twitter. After making a formal complaint against his manager for racist comments, the company ultimately decided not to punish her. Mixer responded with a seemingly earnest apology, but the only action the company took was announcing its shut down the following day. That made the move seem doubly disappointing to many fans.
Mixer’s small size also made it a more intimate home for streamers. “For a lot of people, Mixer was just a streaming platform, a way for them to try and make a bit of money on the side or a stepping stone in their streaming careers,” streamer JRMATRIX wrote in a farewell letter. “For the rest of us, Mixer was one thing and one thing only, it was a home. It was our home.”
When asked why he chose to jump to Twitch instead of Facebook Gaming, JRMatrix, whose real name is Nate Flynn, told us that he’s trying to keep the community he began building on Mixer. “When we heard about the merger with Facebook Gaming, and the manner in which we found out we all felt a little sold out,” he said. “And I think it really tainted a lot of people’s view of the Facebook Gaming platform, so the majority of us opted for what we felt was a more secure future with Twitch.”
He added, “The thing I’ll miss most about Mixer I think is the atmosphere of the platform as a whole. With it being much smaller it always felt like a much closer knit community to me, and that really came through in the way streamers helped each other out on the platform. I know that community ethic exists on Twitch too, but given the size of the platform it always felt a little out of reach to me as a relative newcomer to streaming. Having that with me now, the prospect of streaming on a larger platform seems less daunting.”