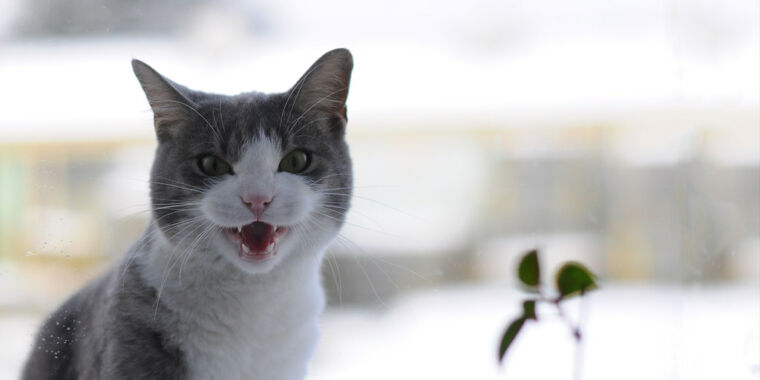 40 with 34 posters participating
More than 1,000 unsecured databases so far have been permanently deleted in an ongoing attack that leaves the word meow as its only calling card, according to Internet searches over the past day.
The attack first came to the attention of researcher Bob Diachenko on Tuesday, when he discovered a database that stored user details of the UFO VPN had been destroyed. UFO VPN had already been in the news that day because the world-readable database exposed a wealth of sensitive user information, including:

Besides amounting to a serious privacy breach, the database was at odds with the Hong Kong-based UFOs promise to keep no logs. The VPN provider responded by moving the database to a different location but once again failed to secure it properly. Shortly after, the Meow attack wiped it out.
Representatives of UFO didnt immediately respond to an email seeking comment.
Since then, Meow and a similar attack have destroyed more than 1,000 other databases. At the time this post went live, the Shodan computer search site showed that 987 ElasticSearch and 70 MongoDB instances had been nuked by Meow. A separate, less-malicious attack tagged an additional 616 ElasticSearch, MongoDB, and Cassandra files with the string university_cybersec_experiment. That attackers in this case seem to be demonstrating to the database maintainers that the files are vulnerable to being viewed or deleted.
Its not the first time attackers have targeted unsecured databases, which have become increasingly common with the growing use of cloud computing services from Amazon, Microsoft, and other providers. In some cases, the motivation is to make money through ransomware rackets. In other casesincluding the current Meow attacksthe data is simply wiped out with no ransomware note or any other explanation. The only thing left behind in the current attacks in the word meow.
One database affected by the Meow attack.
I think that in most [of the latter] cases, malicious actors behind the attacks do it just for fun, because they can, and because it is really simple to do, Diachenko told me. Thus, it is another wake-up call for the industry and companies which ignore cyber hygiene and lose their data and data of their customers in a blink of an eye.
As the head of research for security firm Comparitech, Diachenko regularly scans the Internet for databases that expose information as a result of not being secured by a password. The attackers appear to be running similar searches, and once they identify databases that can be modified without credentials, the attackers execute scripts that delete the data. He said that the Meow attacks have been underway for a few days and showed no sign of letting up. He said he expected the number of affected databases to double in the next day.
People maintaining any cloud-based databases should ensure they are protected according to the providers guidelines.