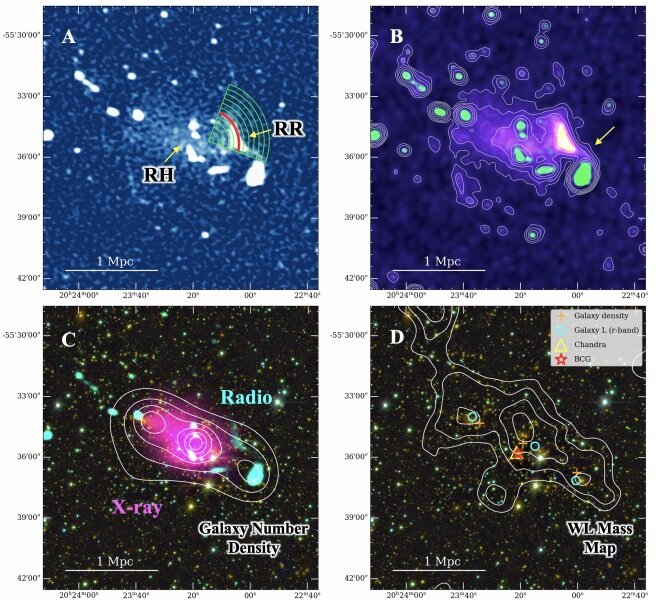 Using the Australian Square Kilometer Array Pathfinder (ASKAP), an international team of astronomers has detected a radio relic in a merging galaxy cluster known as SPT-CL 2023-5535. The discovery is reported in a research paper published July 16 on the arXiv pre-print repository.
Radio relics are diffuse, elongated radio sources of synchrotron origin. They occur in the form of spectacular single or double symmetric arcs at the peripheries of galaxy clusters. Astronomers are especially interested in searching for such sources in merging galaxy clusters as the number of radio relics associated with merger shocks is still small.
SPT-CL 2023-5535 (CL2023 for short) is a massive merging galaxy cluster at a redshift of 0.23, with a size of some 727,000 light years. The presence of diffuse radio emission in this cluster was suggested by previous studies. However, due to the insufficient spatial resolution of these observations and the existence of several bright neighboring radio point sources, this hypothesis has not been confirmed yet.
The confirmation came recently from a group of astronomers led by Kim Hyeong Han of Yonsei University in Seoul, Republic of Korea. They report the finding of a radio relic in CL2023 as a result of an analysis of the ASKAP-Evolutionary Map of the Universe (EMU) deep, high-resolution radio continuum survey. The study was complemented by data from the 4-meter Blanco telescope at the Cerro Tololo Inter-American Observatory and from NASA’s Chandra X-ray spacecraft.
“Here, we report a discovery of a radio relic in the merging cluster SPT-CL 2023-5535 at z = 0.23 from the ASKAP-EMU pilot 300 sq. deg survey (8001,088 MHz),” the astronomers wrote in the paper.
According to the study, the radio relic in CL2023 extends about 1.6 million light years in the north-south orientation from the cluster. The source was found to be located at the western edge of a radio halo, coinciding with the intracluster gas, elongated in the east-west direction from CL2023. The radio halo has a size of around 1.6 by 3.2 million light years.
The radio flux density of the relic to was calculated to be about 16.2 mJy, while its extrapolated radio flux density at 1.4 GHz was measured to be approximately 12.0 mJy. The integrated spectral index of the relic was found to be at a level of -0.76.
Furthermore, the research confirmed that CL2023 is indeed a massive system as its total mass was estimated to be some 1,040 trillion solar masses. It was also found that CL2023 consists of at least three subclusters.
The astronomers concluded that, as the results show, CL2023 is a post-merger system, where its two subclusters might have suffered a major collision between 200 and 300 million years ago.
“The current CL2023 relic orientation suggests that the merger might be happening in the east-west direction, which implies that the relic is the result of the collision between the middle and eastern subclusters,” the authors of the paper wrote.
More information:
Discovery of a Radio Relic in the Massive Merging Cluster SPT-CL 2023-5535 from the ASKAP-EMU PILOT SURVEY, arXiv:2007.08244 [astro-ph.HE] arxiv.org/abs/2007.08244
© 2020 Science X Network
Citation:
Radio relic detected in a merging galaxy cluster (2020, July 22)
retrieved 22 July 2020
from https://phys.org/news/2020-07-radio-relic-merging-galaxy-cluster.html
This document is subject to copyright. Apart from any fair dealing for the purpose of private study or research, no
part may be reproduced without the written permission. The content is provided for information purposes only.