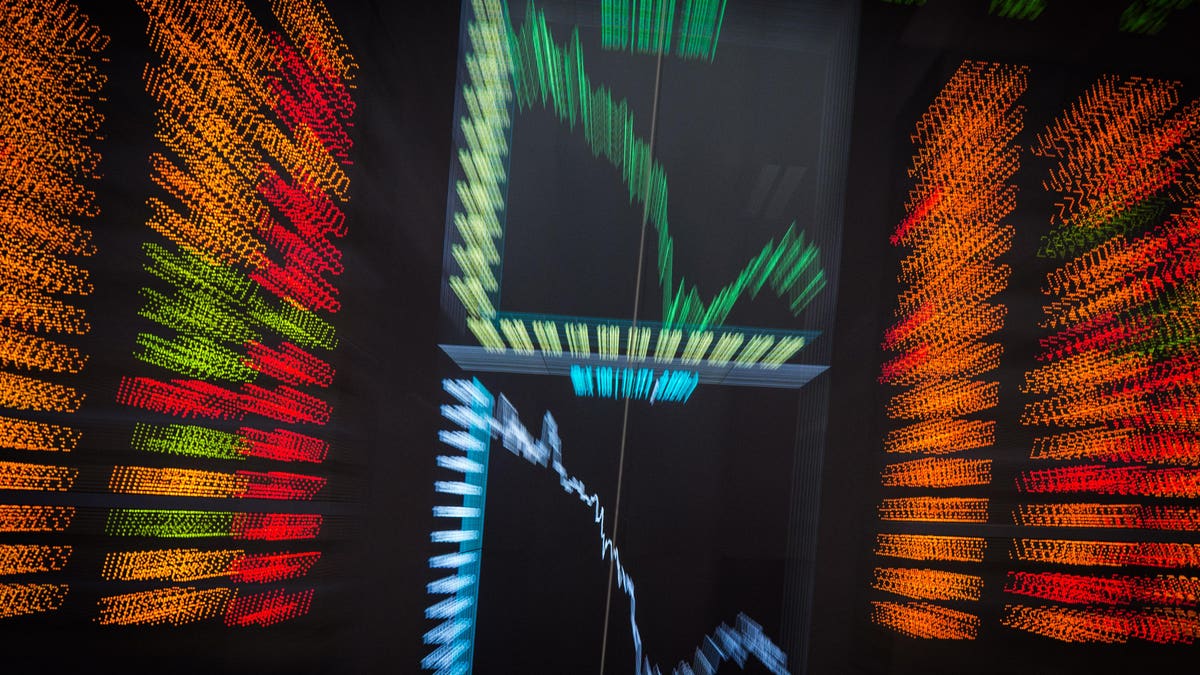 On Aug. 2, the price of Ethereum peaked at $418; then, within 5 minutes, it dropped by 25%. On Binance Futures, ETH plunged to as low as $302, before recovering back to $385 within 10 minutes.
The entire sequence of events happened in a total of 15 minutes. Ethereum hit $418, then dropped to $302, and rebounded to $385, recording a 25% drop and a 27% upsurge, respectively.
The price of Ethereum saw unusual 25% price movements in a 15-minute span.
AFP via Getty Images
Two factors appear to have contributed to the extreme price action of Ethereum. First, based on market structure, the $410 to $420 range has acted as a historical resistance area since 2017. Second, a sudden sell-off at the resistance led to a cascade of liquidations.
The initial drop led to liquidations of more than $1 billion worth of Bitcoin and Ethereum futures contracts in a short period, per data from ByBt. This was the largest liquidation event since March 13, when the price of Bitcoin dropped below $3,600.
In June 2017, the price of Ethereum increased from around $90 to over $400 within 28 days. The explosive rally, which happened months before Bitcoins record-high run up to $20,000, rejected at $420 on Coinbase.
The weekly chart of Ethereum against the U.S. dollar on Coinbase with a historically relevant … [+] resistance level.
TradingView
Coincidentally, the recent uptrend of Ethereum was also rejected at the same level. As soon as ETH neared $420, it saw an abrupt sell-off across major exchanges. In a few minutes, it experienced a 25% drop.
The price drop was exacerbated by cascading futures liquidations. When a long contract gets liquidated, the holder has to sell the contract, causing more selling pressure.
The steep rejection, possibly triggered by the $420 resistance and mass liquidations, marked a blowoff top. Alex Krüger, a global markets analyst, wrote:
That was a blowoff top in ETH and BTC last night. A blowoff doesn’t have to be the top. Silver and gold had a blowoff top last week. See how similar charts are in the days and minutes preceding the crash. Bigger picture remains unchanged. Higher highs ahead in 2020 IMO.
But, Krüger emphasized that crypto assets, due to their highly volatile nature, tend to have several blowoff tops in a single cycle. Hence, he noted that whether it would be the top for Ethereum is uncertain.
A blowoff top doesn’t have to be The Top. Was missing the quotes. Cryptoassets in particular are known to experience multiple blowoffs on the way up given the high use of leverage and how fragmented liquidity is. Saw that with BTC both in 2017 and 2019.
Some investors remain optimistic in the trajectory of Ethereum despite its recent market correction. Kelvin Koh, the co-founder of cryptocurrency venture capital firm Spartan Black, said Ethereum is leading the crypto markets uptrend.
Suggesting that the basis of the Ethereum rally is in anticipation for ETH 2.0, he said:
ETH is leading this charge driven by optimism around the impending launch of ETH 2.0 phase 0 later this month. Depending on how hard ETH runs, the successful launch of phase 0 may culminate in a near term peak for ETH and other large caps.
ETH 2.0 is a key phase in the development of Ethereum that would eventually phase out miners. It optimizes the network to scale, as users stake their ETH to participate in the network and process data.
Ethereum, along with other major cryptocurrencies, including Bitcoin, saw extreme price actions throughout the last 24 hours. For now, the sentiment of analysts remains cautiously optimistic due to various medium-term factors such as ETH 2.0 and decentralized finance (DeFi) growth.