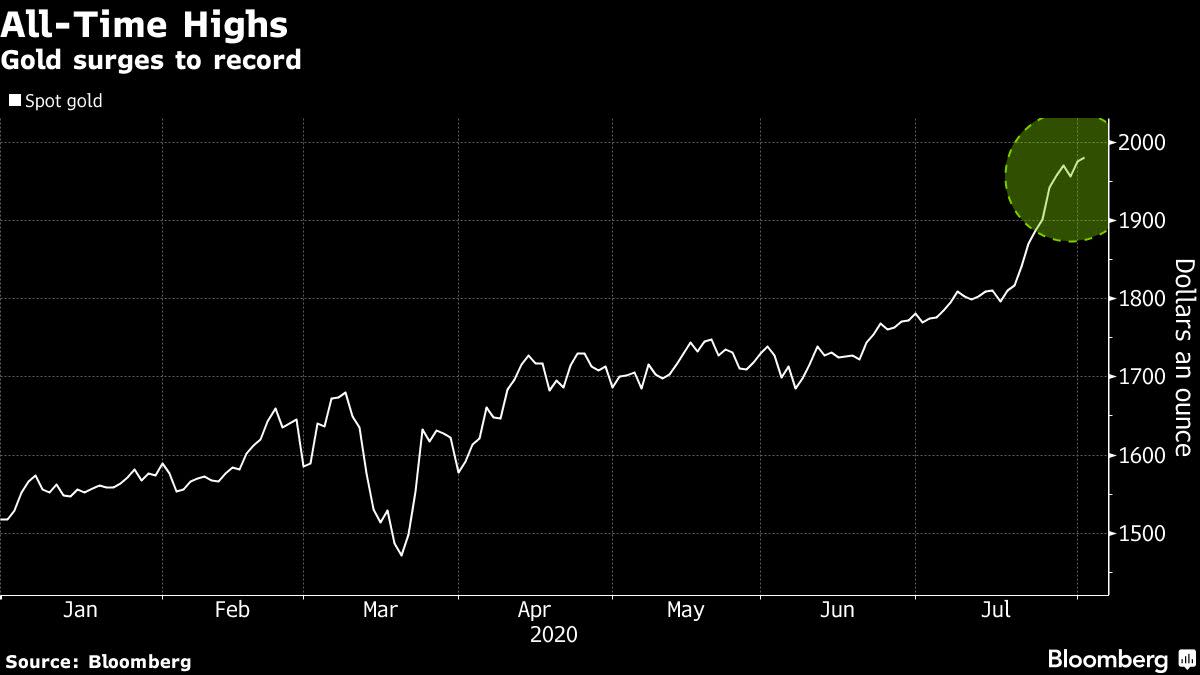 (Bloomberg) — Gold opened the week with a surge to a record, before erasing gains as European equities rebounded on positive economic data and the dollar nudged higher.
Spot gold surged 11% in July, the biggest monthly gain since 2012, as investors weighed a weaker dollar and record low U.S. real yields. Strategists are now considering alternatives to government debt, such as cash, credit, dividend shares and gold. RBC Capital Markets said that gold looks like a freight train due to haven demand.
The health crisis has prompted unprecedented amounts of stimulus being unleashed to shore up economies, including lower rates, which are a boon for non-interest-yielding gold. Simmering geopolitical tensions are also boosting demand — U.S. Secretary of State Michael Pompeo said the Trump administration will announce measures shortly against a broad array of Chinese-owned software deemed to pose national-security risks.
The fall in U.S. 10-year real yields was the most important driver in our view given the strong inverse relationship, Vivek Dhar, an analyst at Commonwealth Bank of Australia, said in a note. Safe haven demand primarily reflected global growth concerns linked to rising Covid19 cases around the world and escalating U.S.China tensions.
Read More: Gold Is Heading for $2,000. After That, the Forecasts Diverge
Spot gold rose as much as 0.6% to $1,988.40 an ounce, before retreating to trade 0.2% lower by 12:46 p.m. in London. Futures in New York were little changed. Spot silver declined 0.6% to $24.2508 an ounce after surging 34% in July.
European stocks rose after factories across the euro area saw a stronger return to growth in July than initially reported, marking the regions first manufacturing expansion in one-and-a-half years.
In coronavirus news, cases surpassed 18 million as the pandemic is now adding a million infections every four days, with flareups prompting more lockdowns.
While the rally appeared to pause on Monday, even those who think gold is overvalued dont see substantial downside. A correction is likely, but it will probably be measured thanks to the weak dollar and chronic uncertainty in the global economy, said analysts at BNP Paribas SA including Harry Tchilinguirian.
For more articles like this, please visit us at bloomberg.com
Subscribe now to stay ahead with the most trusted business news source.
©2020 Bloomberg L.P.