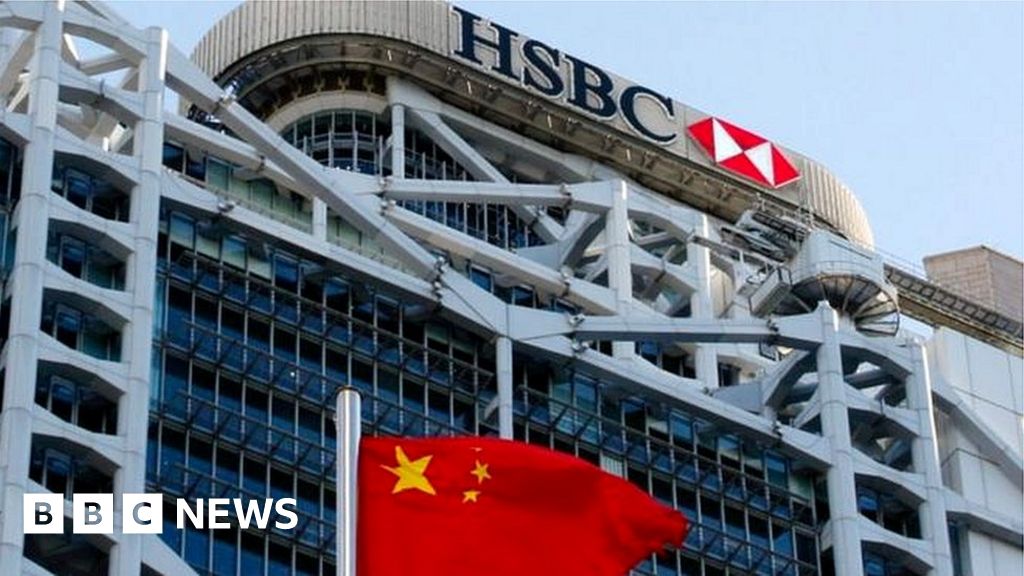 Image copyrightReuters
HSBC plans to speed up job cuts after interim profits plunged and the bank said bad loans linked to the coronavirus could reach $13bn (£9.8bn).
HSBC boss Noel Quinn said it will “accelerate” an earlier restructuring plan which included axing 35,000 jobs.
“Our operating environment has changed significantly since the start of the year,” he said.
Mr Quinn also said the bank would examine “additional actions” to strengthen its business.
Europe’s biggest bank reported a 65% drop in pre-tax profits to $4.3bn for the first half of the year – much steeper than analysts had forecast.
HSBC also said it set aside between $8bn and $13bn this year for bad loans as it expects more people and businesses to default on their repayments because of the coronavirus pandemic.
This is higher than previously budgeted for, taking into account the effects of the economic downturn.
The bank said it had given more than 700,000 payment holidays on loans, credit cards and mortgages, providing more than $27bn in customer relief.
HSBC has also been hit by the low interest rate environment, which squeezes a bank’s profit margins on the loans it provides. The lower the interest rate, the less a bank makes on its lending.
Job cuts
In June, the UK’s largest bank said it would push ahead with its plan to cut 35,000 jobs from a global workforce of 235,000 as part of a major restructuring announced in February.
The job cuts had initially been put on hold during the coronavirus outbreak.
HSBC chairman Mark Tucker is overseeing the programme to shrink the banks operations in Europe and the US.
The bank has previously said it could wind down or sell its US retail banking operations which could involve shrinking its 224-strong US branch network by about 30%.
Political tensions
While HSBC is headquartered in London, more than half of its profits come from the Asian financial hub of Hong Kong.
The bank is dealing with a number of challenges, including tensions between China and the west.
It is currently embroiled in a political battle over its support of China’s national security law in Hong Kong while pushing ahead with the major restructure of its global banking operations.
“We will face any political challenges that arise with a focus on the long-term needs of our customers and the best interests of our investors,” said Mr Quinn.
“Current tensions between China and the US inevitably create challenging situations for an organisation with HSBC’s footprint.
“However, the need for a bank capable of bridging the economies of east and west is acute, and we are well placed to fulfil this role.”
Caught between China and the West
It’s Europe’s largest bank, headquartered in London, but the Hong Kong and Shanghai Banking Corporation makes half of its money in Asia.
And it’s been caught in the midst of increasingly tempestuous relations between China and the West, with the bank expressing support for China’s controversial security laws in Hong Kong in June, breaking a tradition of neutrality.
Chief executive Noel Quinn attempted to reinstate that neutrality today, saying: “We will face any political challenges that arise with a focus on the long-term needs of our customers and the best interests of our investors.”
But who are those customers? Mr Quinn also signalled the resumption of restructuring plans which will pivot the business further towards Asia, with job cuts expected in the UK investment bank and the American branch network.
Its branding is familiar around the globe, but HSBC is a bank that likes to stay out of the headlines.
However, as it chases its ambitions, more pressure and scrutiny will be hard to dodge.
‘More collaboration’
HSBC, along with rival banking group Standard Chartered, have come under fire for their support of Chinas controversial national security law for Hong Kong.
US Secretary of State Mike Pompeo and UK politicians criticised HSBC for supporting China’s new legislation, which means people face prosecution for speaking out against Beijing.
Mr Pompeo said the Chinese Communist Party’s (CCP) “browbeating” of HSBC “should serve as a cautionary tale”.
Image copyrightReutersImage caption
US Secretary of State Mike Pompeo has criticised HSBC’s support for China’s new security law
Last week, Standard Chartered restated its commitment to Hong Kong when it released its first-half results.
Standard Chartered’s group chairman José Viñals said: “We are convinced that more collaboration – not less – is the best way to find a sustainable equilibrium in these complex situations, but we do not expect an easy or quick resolution.
“We do believe, however, that Hong Kong will continue to play a key role as an international financial hub and we are fully committed to contributing to its continued success,” he added.