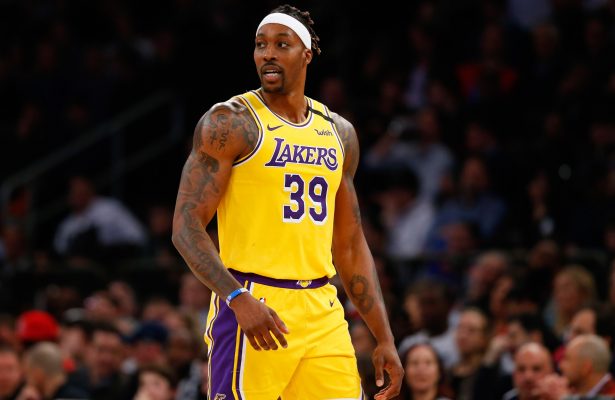 Los Angeles Lakers center Dwight Howard recently predicted that the Lakers will take on the defending champion Toronto Raptors in the upcoming 2020 NBA Finals.
Of course, had Howard chosen any other team than the Lakers to represent the Western Conference, his prediction would likely have garnered plenty of publicity. In choosing the Raptors, Howard selected the team that had a 46-18 record prior to the March 11 shutdown, the second-best record in the Eastern Conference.
If Howard’s prediction does come true, he and the Lakers are hoping for a better outcome than Saturday night’s meeting between the two teams in Orlando, Fla.
That contest ended in a 107-92 victory for the Raptors, with the Lakers being outscored 35-22 in the final quarter. Howard contributed five points and five rebounds in 17 minutes off the bench for the Lakers.
Until Howard recently confirmed that he’d be joining the Lakers, some doubt had existed as to whether he would opt out of playing when the season resumed, joining Lakers teammate Avery Bradley.
However, once Howard committed to playing, he expressed confidence that if the Lakers reach the NBA Finals, they will win it.
Lakers fans are hoping that Howard’s prediction comes true, which would give the Lakers their first league championship in a decade.

Existing home sales rebound strongly in June from pandemic-fueled lows — but will the recovery be sustainable in the long term? – MarketWatch