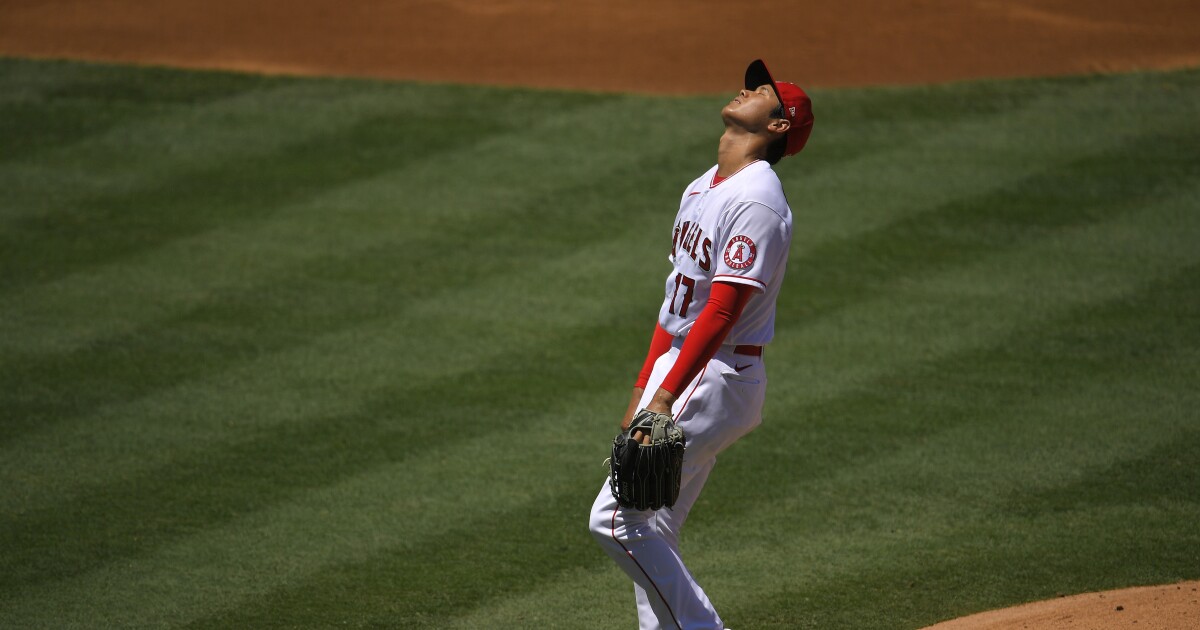 Shohei Ohtani didnt writhe in agony or clutch his elbow. He didnt have to.
The radar gun told the story.
In a particularly strenuous second inning of an 11-inning, 6-5 defeat to the Houston Astros on Sunday, Ohtani delivered three fastballs over a five-pitch plate appearance by George Springer.
The first: 89.6 mph.
Gulp.
Then: 89.1.
Shudder.
Finally: 89.7.
Scream.
The last of the four-seamers counted as ball four, forcing in a run and prompting Ohtanis removal with two outs, the bases loaded and the Angels down, 2-0.
His second start back from reconstructive elbow surgery was over. Depending on the results of the MRI examination he underwent after the game, his two-way experiment could be too.
The pitches were the 39th, 40th and 42nd of the five-walk inning for Ohtani, which initially offered manager Joe Maddon enough cover to deny knowing whether his sudden decline in velocity was health-related. Ohtanis fastball was clocked at 97.1 mph earlier in the inning, according to Major League Baseballs Pitchf/x system.
I thought it was fatigue, Maddon claimed in an online postgame news conference.
Shortly after, an Angels spokesman appeared on camera in place of Ohtani. He said Ohtani wouldnt be speaking because he wasnt at Angel Stadium. Ohtani was on his way to undergo an MRI after experiencing discomfort in his pitching arm.
The scene was reminiscent of a start Ohtani made two Septembers ago in Houston. Ohtanis fastball reached 99 mph in the first inning of that game, only to suddenly drop into the low-90s in the third.
Three days later, surgery was recommended.
This season marked his return to the mound from that injury, but what Ohtani envisioned as a triumphant comeback has become an unmitigated disaster.
Ohtani failed to retire a single batter in his season debut in Oakland. The Angels are in last place in the American League West.
And now this.
Angels vs. Astros highlights.
Another torn ligament could force Ohtani to abandon pitching and concentrate on hitting. He still would have a chance of becoming one of the best players in the game, but not how he wanted to.
How different everything was the previous day when Ohtani was unusually calm for a pitcher who was rocked in his last start.
Replying to a question about what he would like to do against the Astros, he joked, Id like to get one out.
Between his disastrous season debut and Sunday, Ohtani homered twice as a designated hitter, golfing a pitch that was practically on the ground for one and sending a 99-mph heater at his hands to the opposite field for the other. Whereas weaker-minded players might have clung to the highlights as if they were emotional life preservers, Ohtani instead acknowledged his shortcomings.
Of course, I think its better than to have [no home runs], he said through a translator. Still, regarding my hitting, I think there are problems I havent been able to overcome.
He was batting .148, but still not desperate enough to be searching for positives. He sounded as if he were certain he would emerge from his funk.
He did, as a pitcher, for an inning.
Ohtani retired the first three Astros in order. His fastball was in the 95-to-96-mph range, up from the 92-93 it was in Oakland the week before.
That first inning was outstanding, Maddon said. Velocity was up. He looked very comfortable.
But Ohtani couldnt take that into the second inning. He walked Michael Brantley. He got ahead of Yuli Gurriel, 0-and-2, but walked him too. He walked Josh Reddick to load the bases.
Ohtani responded with successive strikeouts of Kyle Tucker and Jack Mayfield. He nearly escaped the jam, but his full-count fastball to Dustin Garneau was called inside by home plate umpire Alfonso Marquez and the Astros went ahead 1-0. Replays showed the pitch was a strike.
If he gets that call, strike three right there, he gets out of the inning with 30-some pitches, Maddon said, and it could have been a different story.
In terms of the game, perhaps. But as far as Ohtanis arm was concerned, that would depend on when the discomfort began.
Ohtanis final pitch to Garneau registered at 94.2 mph. The next fastball he threw, to Springer, was almost 5 mph slower.
Then again, Ohtanis body language noticeably changed earlier in the inning. When Ohtani missed the strike zone with a first-pitch breaking ball to Tucker, he uncharacteristically dropped his shoulders.
At this point, the details of the inning arent important. A players future is at stake. So is his dream of playing both ways in the most competitive league in the world.
When Ohtani moved from Japan to the United States, he resisted calls from some corners to focus on pitching. He could have signed with any team but chose the Angels, who had the flexibility to invest in his vision.
Before departing his homeland, Ohtani explained why he insisted on pitching and hitting.
Theres a part of me that feels its not just mine, he said, pointing to the small group of people who believed he could master both as a professional, as well as the fans who supported him.
The results of his MRI could determine if he will have a chance to play out his ambition.