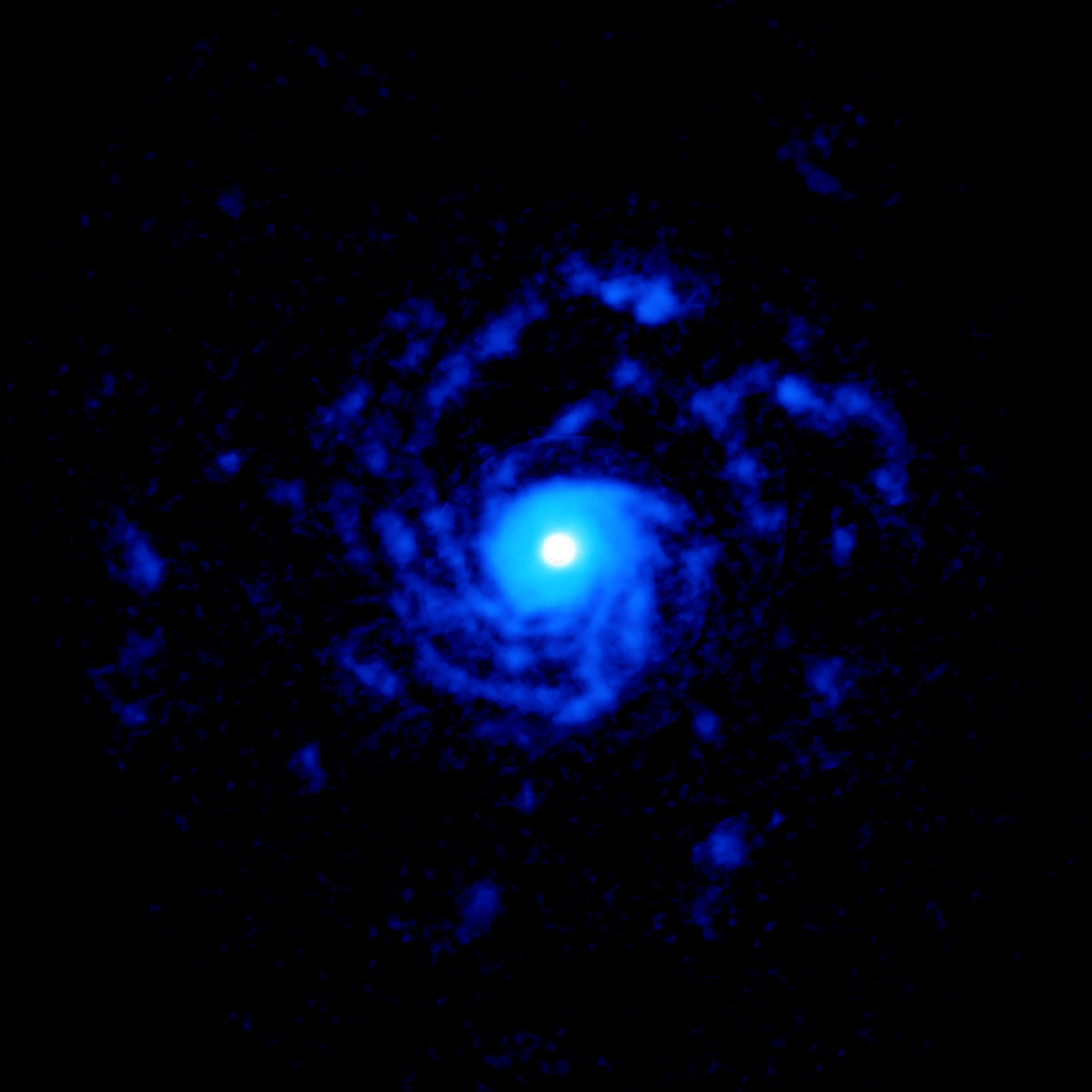 Planet-forming environments can be much more complex and chaotic than previously expected. This is evidenced by a new image of the star RU Lup, made with the Atacama Large Millimeter/submillimeter Array (ALMA).
All planets, including the ones in our Solar System, are born in disks of gas and dust around stars, so-called protoplanetary disks. Thanks to ALMA we have stunning high-resolution images of many of these planet factories, showing dusty disks with multiple rings and gaps that hint at the presence of emerging planets. The most famous examples of these are HL Tau and TW Hydrae.
But disks are not necessarily as neatly arranged as these initial dust observations suggest. A new ALMA image of RU Lup, a young variable star in the Lupus constellation, revealed a giant set of spiral arms made of gas, extending far beyond its more well-known dust disk. This spiral structureresembling a ‘mini-galaxy’ – extends to nearly 1000 astronomical units (au) from the star, much farther away than the compact dust disk that extends to about 60 au.
Previous observations of RU Lup with ALMA, which were part of the Disk Substructures at High Angular Resolution Project (DSHARP), already revealed signs of ongoing planet formation, hinted by the dust gaps in its protoplanetary disk. “But we also noticed some faint carbon monoxide (CO) gas structures that extended beyond the disk. That’s why we decided to observe the disk around the star again, this time focusing on the gas instead of the dust,” said Jane Huang of the Center for Astrophysics, Harvard & Smithsonian (CfA) and lead author on a paper published today in the Astrophysical Journal.
Protoplanetary disks contain much more gas than dust. While dust is needed to accumulate the cores of planets, gas creates their atmospheres.
In recent years, high resolution observations of dust structures have revolutionized our understanding of planet formation. However, this new image of the gas indicates that the current view of planet formation is still too simplistic and that it might be much more chaotic than previously inferred from the well-known images of neatly concentric ringed disks
“The fact that we observed this spiral structure in the gas after a longer observation suggests that we have likely not seen the full diversity and complexity of planet-forming environments. We may have missed much of the gas structures in other disks,” added Huang.
Huang and her team suggest several scenarios that could possibly explain why the spiral arms appeared around RU Lup. Maybe the disk is collapsing under its own gravity, because it is so massive. Or maybe RU Lup is interacting with another star. Another possibility is that the disk is interacting with its environment, accreting interstellar material along the spiral arms.
“None of these scenarios completely explain what we have observed,” said team-member Sean Andrews of CfA. “There might be unknown processes happening during planet formation that we have not yet accounted for in our models. We will only learn what they are if we find other disks out there that look like RU Lup.”
More information:
Jane Huang et al, Large-scale CO Spiral Arms and Complex Kinematics Associated with the T Tauri Star RU Lup, The Astrophysical Journal (2020). DOI: 10.3847/1538-4357/aba1e1
Citation:
ALMA captures stirred-up planet factory (2020, August 3)
retrieved 3 August 2020
from https://phys.org/news/2020-08-alma-captures-stirred-up-planet-factory.html
This document is subject to copyright. Apart from any fair dealing for the purpose of private study or research, no
part may be reproduced without the written permission. The content is provided for information purposes only.