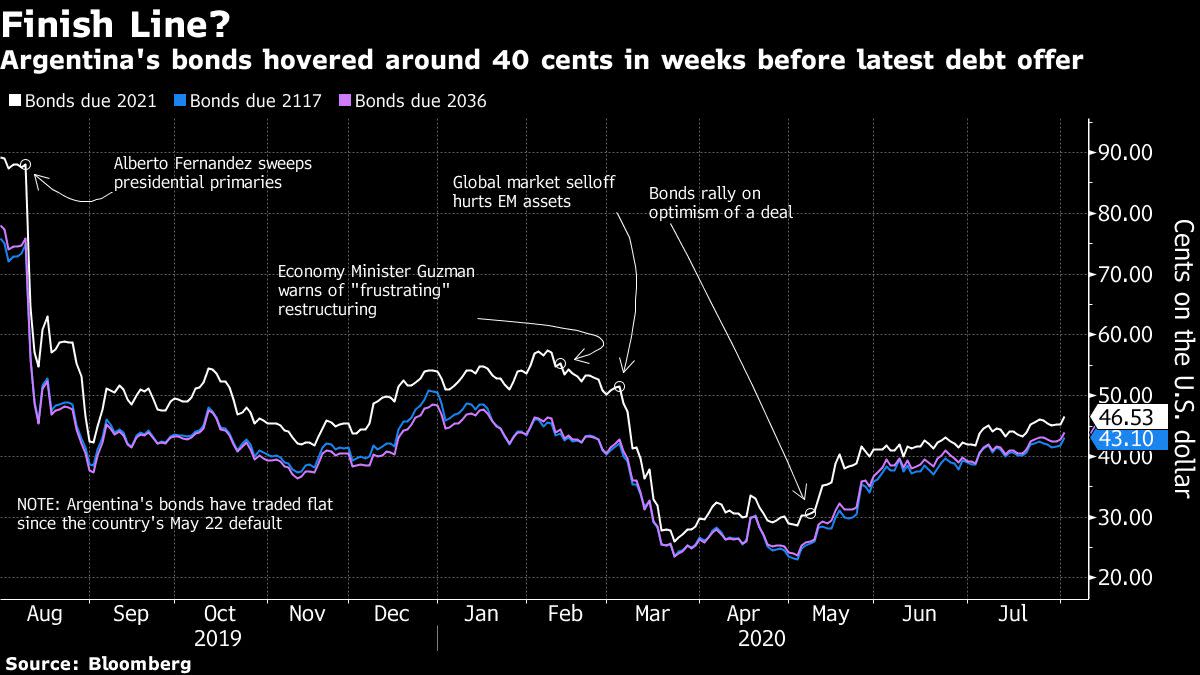 (Bloomberg) — Argentina and some of its top creditors are moving closer to an agreement to restructure $65 billion of bonds, according to people with direct knowledge of the matter.
The sides made progress over the weekend and are discussing a deal where bondholders would receive about 54.8 cents on the dollar, close to the midpoint of the most recent offers from creditors and the Argentine government, said the people, who declined to be named discussing the content of private talks.
The breakthrough came during a call on Sunday between Argentine Economy Minister Martin Guzman and BlackRock Inc managing director Jennifer ONeil, two of the people said, with participation of Bank of America Corp, which is advising the government.
The Economy Ministrys press office declined to comment. Representatives for the creditor groups, BlackRock and Bank of America did not immediately reply to a request for comment on developments.
Fine points of the deal, including clauses which bolster creditor rights by closing legal loopholes for bond contracts were still under discussion, the people said. Before the latest talks, the gap between the two negotiating positions had been only about 3 cents on the dollar on a net present value basis, according to Goldman Sachs Group Inc and Morgan Stanley analysts.
Argentinas dollar bonds rose to their highest in nearly five months, with the countrys $4.25 billion in bonds due 2028 climbing 1.1 cents to 43 cents on the dollar. The benchmark Merval stock index also gained more than 6% on Monday.
The market seems to be pricing in that an agreement is close, said Juan Manuel Pazos, chief economist at TPCG in Buenos Aires. Though I dont take it as closed until its officially announced and theres a settlement exchange.
An agreement would end months of talks between the government and key bondholders including BlackRock, Ashmore Group Plc, and Fidelity Investments, and mark a first step toward stabilizing a struggling economy. Inflation hovers near 45%, the peso has lost 87% of its value since late 2015 and the economy is poised for its third straight year of recession amid a record contraction in 2020.
READ MORE: Argentina Creditors Boost Bargaining Power With New Funds (2)
Efforts are now focused on getting more bondholders on board and to release a statement of support signed by the main creditor groups, known as the Ad Hoc Bondholder group, the Exchange Bondholder group and the Argentina Creditor Committee, one of the people said. That block, which says it holds over 50% of the countrys overseas debt, had previously rejected an offer and said it would not support it.
The deadline for Argentinas current offer, which is due to expire Tuesday, should be extended again as the government will need to publish a new decree including the changes and then submit it to the U.S. Securities and Exchange Commission so that it is publicly available for at least 10 days, the people said. The settlement date would remain Sept. 4, according to the people familiar.
(Updates to add details of talks with BlackRock in second paragraph.)
For more articles like this, please visit us at bloomberg.com
Subscribe now to stay ahead with the most trusted business news source.
©2020 Bloomberg L.P.

Court Ruling Clears Way For Energy Storage On The Grid. Who Benefits? – Forbes