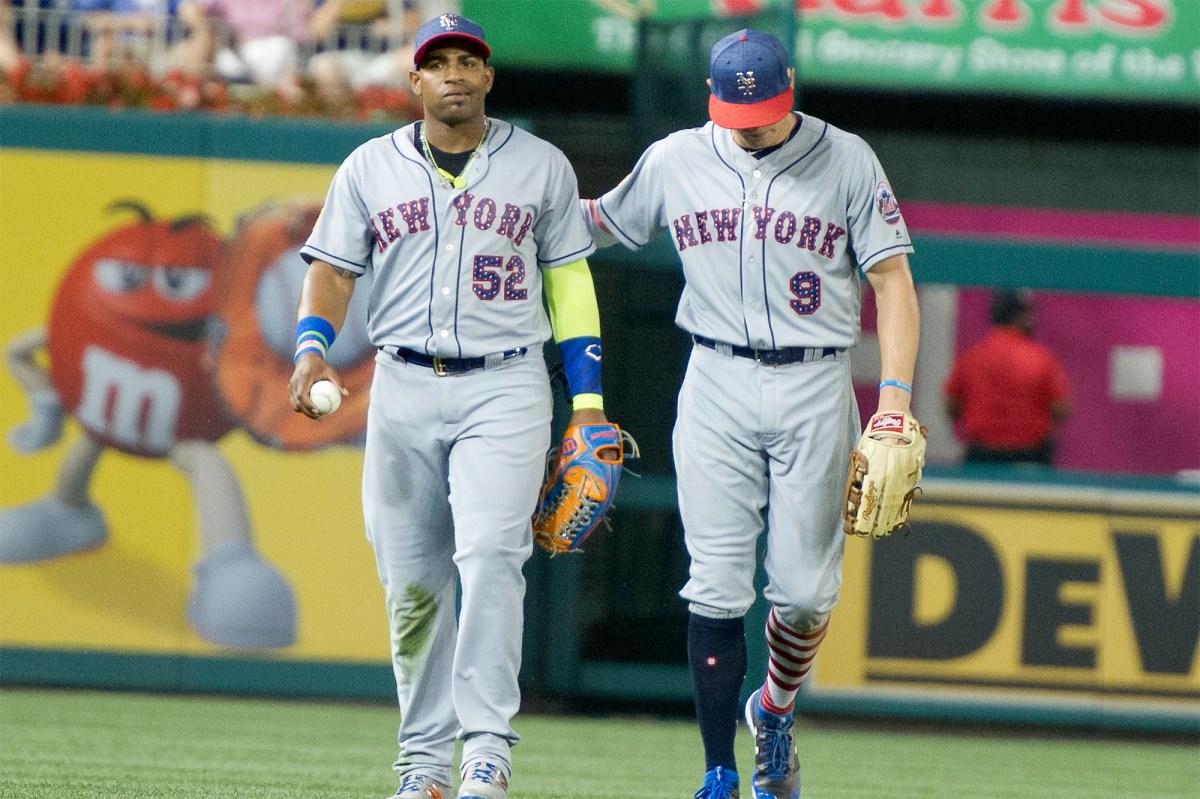 ATLANTA Mets players arent sure what to believe surrounding Yoenis Cespedes strange departure from the team other than the fact the veteran outfielder has opted out from the season, citing COVID-19 concerns.
Brandon Nimmo raised the possibility Monday that team officials actually knew before Sundays game that Cespedes had opted out. As it was, general manager Brodie Van Wagenen issued a statement early in the game saying Cespedes wasnt at the ballpark and attempts to contact him were unsuccessful. Van Wagenen later said he wasnt notified by Cespedes agent until the eighth inning about the opt-out.
So from Nimmos perspective, its not necessarily true that Cespedes jilted his teammates by not showing up at Truist Park.
Theres two sides of the story, Nimmo said. We have the side where [the Mets] were let known before the game and weve also heard the side where they werent let known until the eighth inning, so I honestly dont know which one to believe and Im not going to try to figure that one out, but as far as us, we knew that people could walk whenever they wanted.
Asked where the story about the Mets knowing before the game that Cespedes opted out had originated, Nimmo cited sources around the team and rumors.
Yoenis Cespedes (l) and Brandon NimmoRon Sachs – CNP
The Mets on Monday doubled down on their version of the story, that Van Wagenen wasnt aware of the opt-out until he was notified by Cespedes agent in the eighth inning. Van Wagenen, a source said, then notified team COO Jeff Wilpon to update the situation. Earlier, the Mets had sent security to Cespedes room at the team hotel to check on his safety and found no trace of Cespedes or his belongings.
The Post reported there had been tension between Cespedes and team officials in the last week over playing time. Cespedes, whose contract was incentive-laden, twice complained to Van Wagenen and manager Luis Rojas about his removal from the starting lineup, according to sources. Rojas, a source said, had been unaware of the incentive structure in the sluggers contract until Cespedes complained about it last Monday, when he was absent from the starting lineup in Boston.
Nimmo said he found out during Sundays game about Cespedes departure from teammate Michael Conforto.
I knew [Cespedes] wasnt in the lineup, but realized that he also wasnt around, Nimmo said. I just asked Mike, Is Ces gone? He said, Yup, and that was the end of the conversation. I wasnt worried about [Cespedes] health, because I knew this was a possibility that people could just walk away, so I was pretty sure he was taken care of.
Nimmo said he had heard rumors Cespedes might opt out.
But other than that I wasnt extremely surprised mid-game when I asked Mike, but I was like, We have got a game to focus on so we just might as well try to win this one.
Pete Alonso defended Cespedes decision to leave and the way the player handled it.
I didnt know what was going on I was a little confused, Alonso said. But I totally understand why he is doing it. Hes got a family to take care of and if he were to come down with something that doesnt help him or his family out, so I totally get it. I was kind of caught off guard, but, hey, its his choice and I respect it.
Alonso was asked if he would have left without saying goodbye to his teammates.
If I was opting out or I had to leave or had to go, if I had guys numbers I would give them a call, Alonso said. But I dont know the situation.