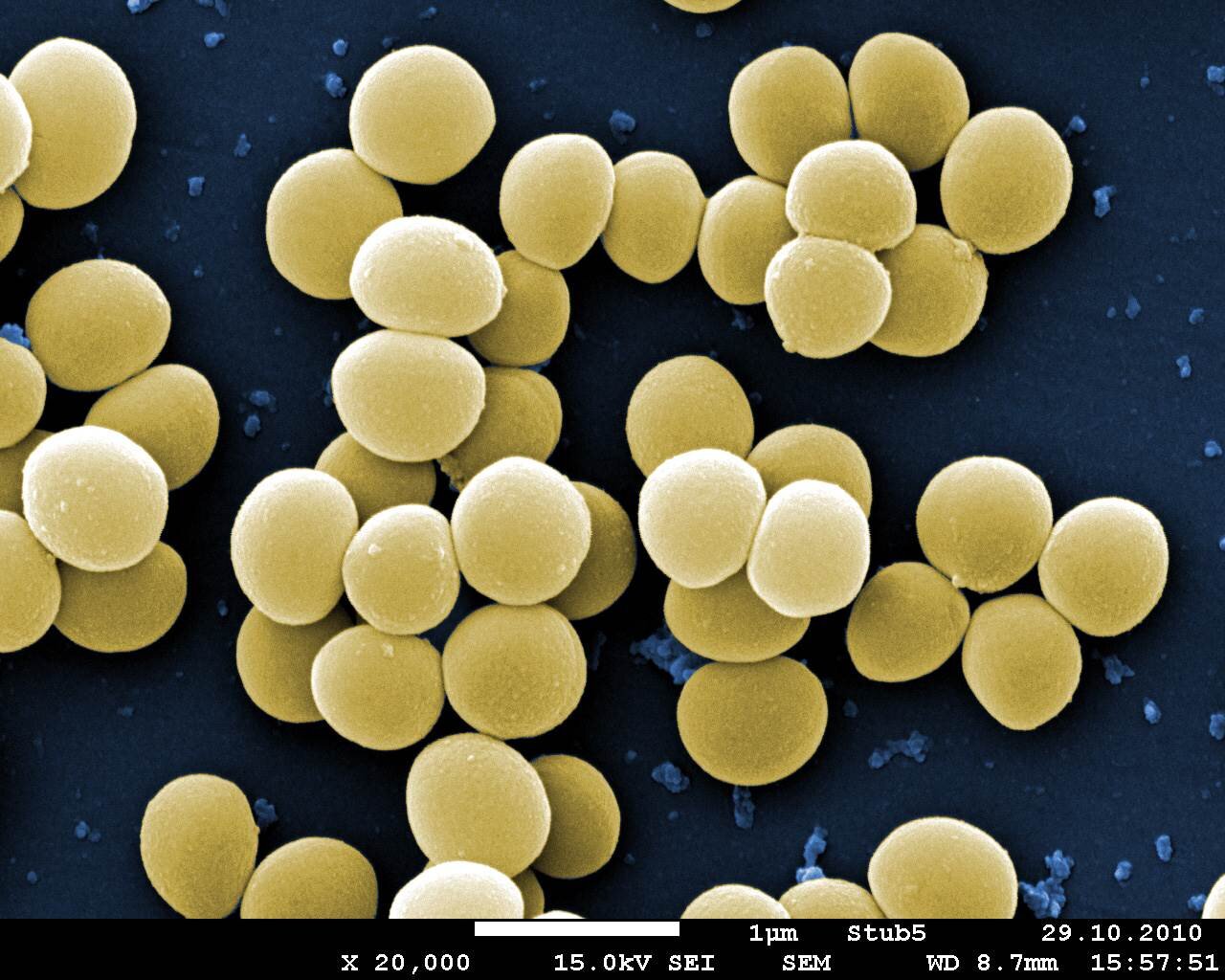 Staphylococcus aureusalso known as “golden staph”has the ability to develop in highly variable environmental conditions (on the skin, in the nose, on sterile surfaces, and so forth). Its great adaptability depends on an RNA helicase involved in the degradation of RNA messengers that have become useless. In their attempts to have a better understanding of how this helicase works, scientists from the University of Geneva (UNIGE) discovered that it contributes to another physiological process without any apparent link to the first: the synthesis of the fatty acids that are the essential constituents of the bacterial membrane. This advance, to be published in the journal PLoS Genetics, offers an interesting insight since fatty acid synthesis is precisely one of the targets favored by numerous laboratories to fight this pathogen that is difficult to treat due to its resistance to antibiotics.
Golden staph (Staphylococcus aureus) is an opportunistic pathogenic bacterium that is capable of adapting to highly variable environments. It can be found in the nostrils of 25 to 30% of the population, although this is generally not a problem. However, the bacterium can take advantage of a drop in immunity or a surgical operation to trigger a real infection. And the problem with golden staph is its ability to develop resistance to antibiotic drugs, which often makes it difficultsometimes impossibleto treat.
“My laboratory studies a protein, RNA helicase, which plays an important role in golden staph’s ability to adapt to very different environments,” says Patrick Linder, a professor in the Department of Microbiology and Molecular Medicine in UNIGE’s Faculty of Medicine. “When the environment changes, the bacterium has to be able to synthesize new proteins that are more suitable and stop the production of others that are no longer useful. The helicase we’re interested incalled CshAis involved in the degradation of the RNA, those molecules derived from the DNA and used in protein synthesis.”
Cold-sensitive bacteria
Oddly enough, when the helicase is absent (due, for example, to a genetic mutation), the researchers found that the cultured bacteria could no longer form colonies if the temperature dropped below a certain threshold (around 25°C).
The Geneva-based biologists undertook a series of experiments designed to improve our understanding of the link between golden staph’s sensitivity to cold, the degradation of the RNA and the adaptation capacity. They discovered that the same helicase is probably also required in another physiological process, namely the synthesis of fatty acids, which are the constituents of bacterial membranes.
“Using cultured golden staph stripped of helicases, we succeeded in isolating 82 gene mutations (appearing spontaneously in many different bacteria), which meant that their holders regained the ability to form colonies at 25°C,” says Vanessa Khemici, a researcher in Patrick Linder’s laboratory and the article’s first author. “We identified almost all the affected genes, and no less than two thirds of them are involved in the fatty acid synthesis.”
The findings also helped the researchers understand that the lack of the helicase has the effect of deregulating the fatty acid synthesis and decreasing the flexibility of the membrane when the temperature drops. This prevents the membrane from fulfilling its functions properly and the bacterium from growing. In a second step, each of the 82 mutations succeeded in its own way in restoring the initial balance by acting on the different genetic levers involved in fatty acid synthesis.
Scientific controversy
“A section of the scientific community supports the idea that a future treatment against staphylococcus will involve a drug capable of inhibiting fatty acidsynthesis,” says Professor Linder, “but there is a controversy about it because some studies contradict this point of view.”
The results of the Geneva scientists do not provide a clear-cut answer or make it possible to directly develop a drug against these bacteria. Nevertheless, they fit into this context and provide a better understanding of golden staph’s fundamental mechanisms. The discovery of this unprecedented link between the fluidity of the membrane and adaptation to environmental change represents an important step in the fight against the bacterium. It is undoubtedly for these reasons that the journal decided to publish an overview in parallel with the article.
More information:
Vanessa Khemici et al. The DEAD-box RNA helicase CshA is required for fatty acid homeostasis in Staphylococcus aureus, PLOS Genetics (2020). DOI: 10.1371/journal.pgen.1008779
Citation:
Cold-sensitive staphylococci reveal a weakness (2020, August 3)
retrieved 3 August 2020
from https://phys.org/news/2020-08-cold-sensitive-staphylococci-reveal-weakness.html
This document is subject to copyright. Apart from any fair dealing for the purpose of private study or research, no
part may be reproduced without the written permission. The content is provided for information purposes only.