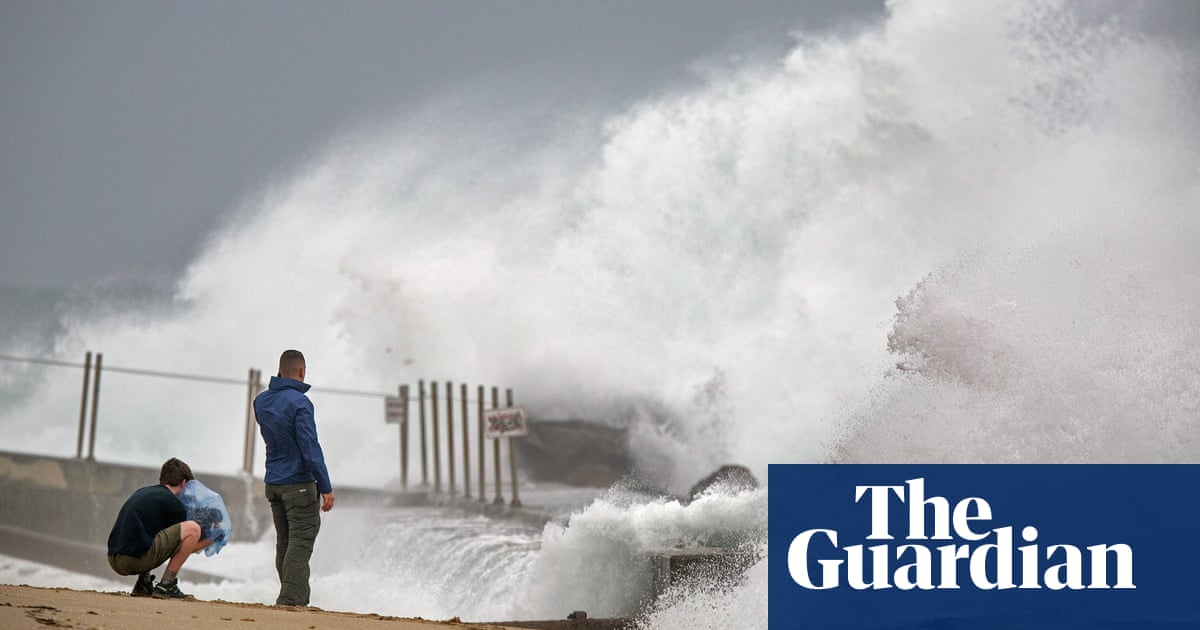 Hurricane Isaias has been downgraded down to a tropical storm after making landfall near Ocean Isle Beach, North Carolina.
The hurricane touched down shortly after 11pm on Monday with maximum sustained winds of 85mph (136km/h), weakening to 70 miles per hour (117km/h).
Now that the center has moved further inland into east North Carolina, the winds are now coming back down, so it has been downgraded back to a tropical storm, Robbie Berg, a hurricane specialist with the National Hurricane Center, told the Associated Press.
The center had warned oceanside residents to brace for a storm surge of up to 5ft (1.5 meters) and up to 8 inches (20cm) of rain in spots as Isaias continued its march up the US east coast.
Coastal residents secured patio furniture, ferry operators completed evacuations on the Outer Banks, and officials passed out sandbags and offered car space in elevated garages.
The Carolinas are not the only states at risk, with Isaias likely to bring further heavy rains of up to eight inches in spots as it moves north.
All those rains could produce flash-flooding across portions of the eastern Carolinas and mid-Atlantic, and even in the north-east US, said Daniel Brown, a senior hurricane specialist at the hurricane center.
A tropical storm warning extended all the way up to Maine, where flash flooding was possible in some areas on Wednesday.
Donald Trump on Monday described Isaias as very serious, saying people should remain vigilant until it passes.
Over the weekend, Isaias brought heavy rain and flooding to Florida as officials kept a close eye on the storm while dealing with surging cases of the coronavirus.
The storm had weakened from a hurricane to a tropical storm on Saturday afternoon, and its most damaging winds remained offshore.
Dont be fooled by the downgrade, the Florida governor, Ron DeSantis, warned at a news conference after the storm spent hours battering the Bahamas.
DeSantis said that with Florida entering the seasons most active time for hurricanes, residents should have a weeks supply of water, food and medicine on hand.
Upper-level winds later sapped much of the storms strength, said Stacy Stewart, senior hurricane specialist at the hurricane center in Miami.
We were expecting a hurricane to develop and it didnt, Stewart said Sunday. Its a tale of two storms. If you live on the west side of the storm, you didnt get much. If you live east of the storm, theres a lot of nasty weather there.
Isaias caused destruction and two deaths as it uprooted trees, destroyed crops and homes and caused widespread flooding and small landslides in the Dominican Republic and the US territory of Puerto Rico.
One man died in the Dominican Republic. In Puerto Rico, the national guard rescued at least 35 people from floods that swept away one woman, whose body was recovered Saturday.
Isaias then snapped trees and knocked out power as it blew through the Bahamas on Saturday. Officials in the Bahamas opened shelters for people in Abaco island to help those who have been living in temporary structures since Dorian devastated the area, killing at least 70 people in September 2019.
Authorities closed Florida beaches, parks and virus testing sites, lashing signs to palm trees to stop them blowing them away. Officials also adapted their shelter policies to the pandemic, providing spaces where people could stay safely apart from each other to prevent the spread of the virus.
In Palm Beach county, about 150 people were in shelters, wearing masks, said emergency management spokeswoman Lisa De La Rionda.
The county has a voluntary evacuation order for those living in mobile or manufactured homes, or those who feel their home cannot withstand strong winds.
In Indian River county, north of West Palm Beach, Florida, emergency shelters were clearing out Sunday after Isaias was downgraded to a tropical storm.
Officials told TCPalm newspapers that 38 people registered at three schools used as shelters. Those areas now must be cleaned to ensure no traces of the coronavirus remain as teachers and staff report Monday to prepare for the upcoming school year.
No one checked in with Covid-19 symptoms. Temperature checks were done at the door, officials said, and isolation rooms were designated in case anyone came in with symptoms.