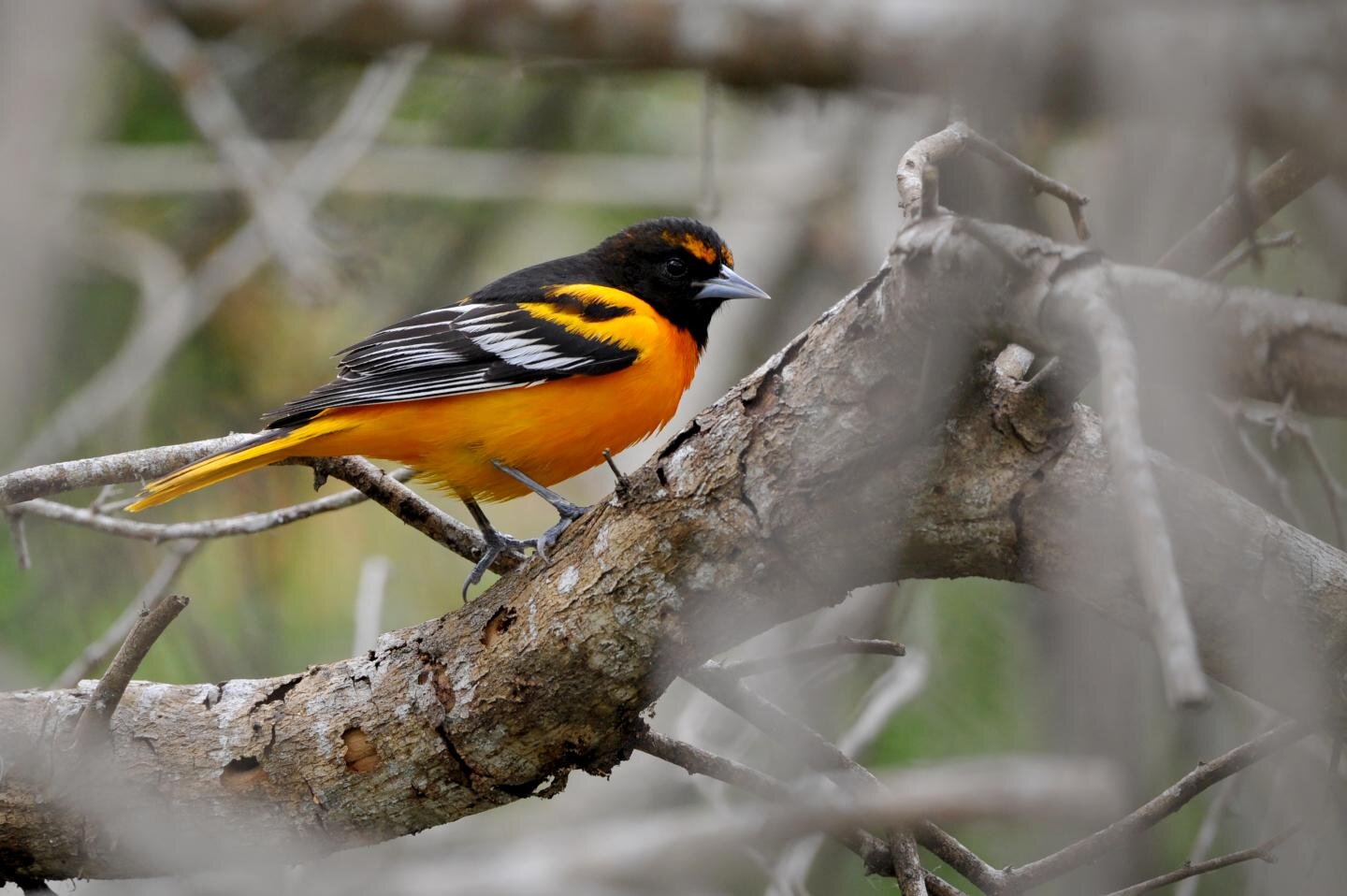 A half-century of controversy over two popular bird species may have finally come to an end. In one corner: the Bullock’s Oriole, found in the western half of North America. In the other corner: the Baltimore Oriole, breeding in the eastern half. Where their ranges meet in the Great Plains, the two mix freely and produce apparently healthy hybrid offspring. But according to scientists from the Cornell Lab of Ornithology, hybridization is a dead end and both parent species will remain separate. Findings from the new study were published today in The Auk.
“The debate over whether Bullock’s and Baltimore Orioles are one species or two goes to the very heart of what defines a species,” said lead author Jennifer Walsh, a postdoctoral researcher at the Cornell Lab. “For a long time, that definition included the inability of one species to reproduce with any other. Bullock’s and Baltimore Orioles clearly can mate where their ranges overlap in the hybrid zone, but that’s not the whole story.”
The oriole conundrum began with the birds long considered to be two distinct species. But the discovery that they interbreed caused the Bullock’s and Baltimore Orioles to be lumped together under the name Northern Oriole in 1983, much to the consternation of birders and some biologists who felt that these birds were each highly distinct. In 1995, the American Ornithological Union reversed course and split them back into their two separate species. According to Cornell Lab researchers, this study may finally settle the lump-or-split debate.
The researchers examined genetic markers from almost 300 orioles (Bullock’s, Baltimore, and many hybrids) from the woodlands on the banks of the Platte River in Nebraska and Colorado. They found the oriole hybrid zone has been shrinking since it was first intensively studied in the 1950s. The scientists say if hybridization conferred any survival advantage, the zone would have gotten bigger, with more mixing of genes between the parent species, and more hybrids. Instead, ongoing natural selection pressures are limiting the expansion of the hybrid zone and preventing the homogenization of the two species.
“I call hybrid zones the ‘supercolliders of speciation,'” says Irby Lovette, co-author and director of the Lab’s Fuller Evolutionary Biology Program. “Through these special matings, genes and traits are mixing and matching in new combinationsall of which helps us learn more about where biodiversity comes from, and therefore how new species arise.”
The orioles are not alone in their flexible mating standardsabout 10% of the world’s bird species hybridize. Hybrid zones exist in the U.S. for Black-capped and Carolina Chickadees, Indigo and Lazuli Buntings, and others. But not all hybrid zones are following the same pattern as that of the orioles. For example, Blue-winged- and Golden-winged Warblers have hybridized so much they may be moving toward a merger of the two species.
“We’re learning that hybrid zones are really very dynamic, shifting and changing over time,” said study author Shawn Billerman. “That aspect of hybrid zones has become recognized as common and widespread in the past 10 to 20 years with the rapid improvement in genetic sequencing.”
Though the scientists feel the one-or-two species matter is probably settled, there are other questions they want to pursue. Their next steps are to identify the specific factors that are limiting oriole hybrid expansion, sequence the entire genome for both Bullock’s and Baltimore Orioles, and determine the specific genes that cause differences in the appearance and behavior of the two orioles.
More information:
Jennifer Walsh et al, Genomic and plumage variation across the controversial Baltimore and Bullock’s oriole hybrid zone, The Auk (2020). DOI: 10.1093/auk/ukaa044
Citation:
Oriole hybridization is a dead end: study (2020, August 3)
retrieved 3 August 2020
from https://phys.org/news/2020-08-oriole-hybridization-dead.html
This document is subject to copyright. Apart from any fair dealing for the purpose of private study or research, no
part may be reproduced without the written permission. The content is provided for information purposes only.