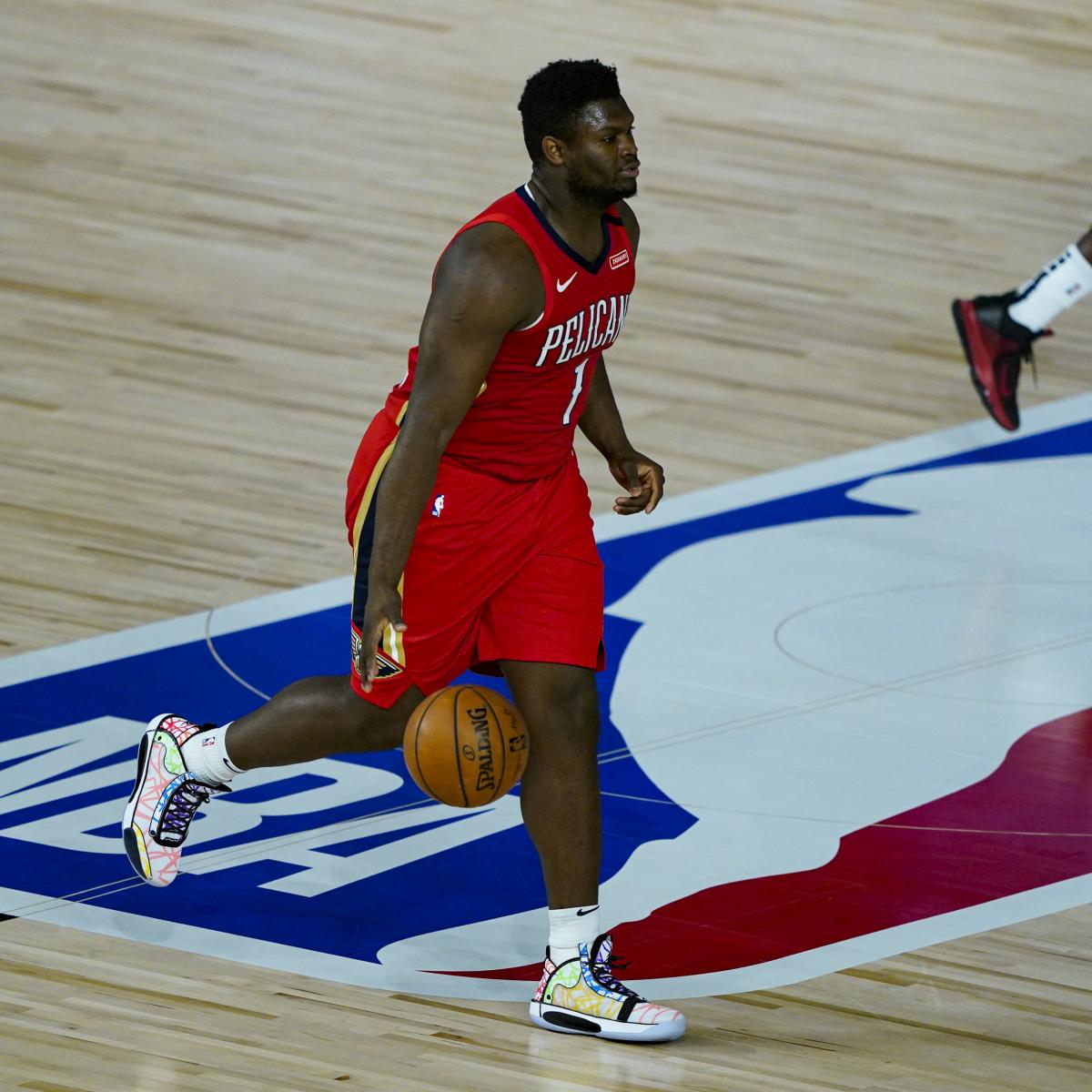 Ashley Landis/Associated Press
The NBA may have designed its Disney bubble’s 22-team format primarily as a means to get Zion Williamson onto more television screens, but it created a race for the eighth seed in the Western Conference that’s more funand more competitivethan expected.
Williamson’s New Orleans Pelicans defeated the Memphis Grizzlies 109-99 on Monday, cutting Memphis’ lead for that final playoff spot to two games. Ninth place belongs to the Portland Trail Blazers. They moved percentage points ahead of the San Antonio Spurs when the Spurs lost 132-130 to the Philadelphia 76ers on Monday.
The Blazers and Spurs hold a half-game lead over the Pelicans, a one-game lead over the Sacramento Kings and a game-and-a-half lead over the Phoenix Suns. That’s all going to change 24 hours from now, but that’s where things stand.
With Memphis having lost its first three seeding games, it’s a near certainty the eighth and ninth seeds will be within four games of each other, triggering a play-in series in which the ninth seed must beat the eighth seed twice before the eighth seed wins once to earn a matchup with the Los Angeles Lakers in the first round.
The Pelicans’ win over the Grizzlies was huge, not only because it kept them within striking distance of a shot at the playoffs but also because it represented the gradual lifting of Williamson’s controversial minutes limit. After the No. 1 overall pick played just 15 and 14 minutes in New Orleans’ first two games, head coach Alvin Gentry and team president David Griffin found themselves playing defense, insisting it was simply to get Williamson’s conditioning back up to speed after he missed training camp because of a family situation. But Williamson came alive against Memphis, playing 25 minutes and looking more like the phenom he was in limited games after making his NBA debut in January.
Bleacher Report@BleacherReportZion threw down on the oop from Zo
(via @PelicansNBA)
https://t.co/KnqnqrPOHo
New Orleans’ schedule gets easier, including two games against the Kings, who are not in last place but are in by far the most trouble of any of the teams fighting to reach the playoffs. Sacramento suffered a disappointing loss to the Orlando Magic on Sunday following a bubble-opening loss to the Spurs on Friday. With Marvin Bagley III out, the Kings’ hopes are fading.
Besides the Spurs, who have looked impressive so far despite the last-second lost to the Sixers, the team that has impressed the most in this cluster has been the Suns. Phoenix took care of the happy-to-be-here Washington Wizards in its opening game and then pulled out a 117-115 win over the Dallas Mavericks on Sunday. Devin Booker has thrived in the bubble, scoring 30 points against Dallas and 27 against Washington.
Booker has long been accused of being an empty-stats star because of the Suns’ lack of anything close to team success in his five seasons in the NBA. These eight seeding games are the most meaningful games he’s played in his professional career. So far, he’s risen to the moment.
Kim Klement/Associated Press
Though the league’s preference seems to be for New Orleans to snag the eighth seed, the popular pick heading into the bubble was Portland because of Damian Lillard’s proven playoff record and the return of starting power forward Zach Collins and center Jusuf Nurkic to the lineup. Thus far, they Blazers have been a mixed bag.
They pulled out an overtime win against the Grizzlies in their opening game but fell to the Boston Celtics on Sunday despite mounting a second-half comeback. The formula is there: some big-time shots from Lillard in the Boston game and CJ McCollum in the Memphis game, and Nurkic looks like he hasn’t lost a step. Backup guard Gary Trent Jr. has had two breakout performances. But Collins is reacclimatizing less easily than Nurkic, still plagued by his old fouling problems. And Hassan Whiteside, after starting all season in Nurkic’s absence, has struggled in a bench role.
Portland’s schedule won’t get any easier. It faces the Houston Rockets, Denver Nuggets, Clippers and 76ers before closing with two more winnable games against the Mavs and Brooklyn Nets. The Blazers own tiebreakers over the Pelicans and Spurs, but they can’t afford any more lackluster performances like in the first half against the Celtics.
By the middle of next week, the rest of the playoff field may be set. But the race for the final seed in the Western Conference has been the most compelling story of the first handful of days of the bubble, and it’s going to come down to the final day. Get ready.
Sean Highkin covers the NBA for Bleacher Report and co-hosts the Bulls vs. Blazers podcast. He is based in Portland, Oregon. His work has been honored by the Professional Basketball Writers Association. Follow him on Twitter, Instagram and in the B/R app.
Former Detroit Pistons and Orlando Magic head coach and current TNT color commentator Stan Van Gundy returns to The Full 48 with Howard Beck to discuss life in the NBA bubble as a member of the media, the reason for the high-scoring games, injury management vs. load management, Zion Williamson and the Pelicans, Philadelphia’s chances at a championship and why Ben Simmons is the most underrated player in the league.