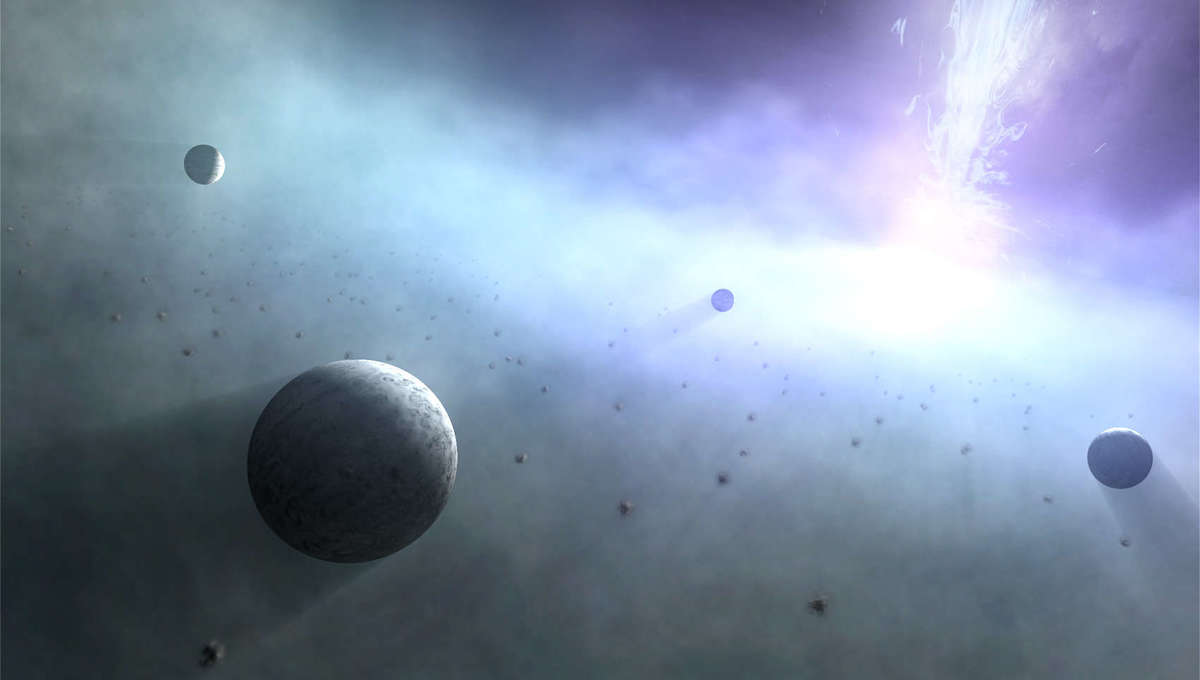 We know that planets like the ones in our solar system form in flat disks of gas and dust called protoplanetary disks. We can actually see that happening all over the galaxy.
But a team of astronomers wondered if that were the only place they could be born. So they figured why not see if planets can form in the very worst place you can imagine in the entire Universe: Near a supermassive black hole.
No, seriously, stop laughing. Its at least theoretically possible, and the astronomers dubbed them blanets.
Yeah, Im not crazy about the name either. And I know it seems silly at first, but in fact all this makes a weird sort of sense.
Supermassive black holes are found in the centers of big (and some small) galaxies. They are like normal black holes except they are extremely huge (supermassive, you might say), with masses millions and even billions of times that of the Sun. They form and grow along with their host galaxy, fed by gas and dust (and the occasional star) that flow into the galaxys core.
Before falling in, this material forms a huge flat disk around the black hole called an accretion disk. The disk can be incredibly hot, and blast out truly staggering amounts of radiation (we call galaxies like this active). But sometimes, much farther out than the superhot accretion disk, there is a second co-planar disk of much cooler gas and dust surrounded by a puffy donut of dust.
This part of the disk can extend from a few to a few dozen light years out from the black hole, and even though the scale is much, much vaster many the conditions are similar to the disk of gas and dust around a newly forming star. Lets take a look at what we know about how this works around a star.
Close in to the baby star its hot, but when you get far enough out the temperature cools considerably. At some distance, what astronomers call the snow line, the temperature drops enough that molecules like water, carbon monoxide, and ammonia can condense to form ices. Dust (little silicate bits) can clump together too, at first forming tiny microscopic grains that bump and stick, becoming fluffy, porous aggregates a millimeter or so across.
At that point different complex processes take hold, but in the end those stick together to form pebbles, then rocks, then boulders once they grow to a few hundred meters in size gravity kicks in and they actively draw material toward them, and the growth increases rapidly, and you get a planet.
The weird thing is, the same can be true for a supermassive black hole. The disk is exceptionally hot close in to the black hole, but a few light years out the temperature drops enough to have a snow line. The disk is much larger, of course (hundreds of trillions of kilometers across versus some hundreds of millions for a star) but that also means theres a lot more material to form objects from. A lot: Millions or even billions of times as much material. Enough to make a fleet of planets.
Conditions arent exactly the same around stars and huge black holes, of course, and the astronomers found some issues with things like turbulence in the disk (and even its viscosity) hampering blanet formation. But after running the numbers, they find that in lots of circumstances its entirely possible to form blanets around a black hole. If conditions are right, a black hole with a mass a million times the Suns can form blanets in about 70 80 million years, which is slower than around a star, but they can grow in size from 20 times the mass of the Earth (roughly that of Neptune) up to 3000 times Earths mass  ten times that of Jupiter! Thats a big blanet.
A bigger black hole has a bigger disk and can grow bigger planets, enough that they could edge into brown dwarf territory (objects from 13 to about 80 times Jupiters mass, more massive than planets but less than stars).
Mind you, being anywhere in the accretion disk of a supermassive black hole can be unfortunate. If the black hole is actively gobbling down matter the inner disk gets so hot it blasts out high-energy radiation that could cook blanets. However, the astronomers found that a more politely nibbling black hole could still form blanets, and its even likely that planets could form during a galaxys active phase.
Do blanets exist? Well, maybe. Theres a lot more work to be done here, but the scenarios the scientists lay out arent ridiculous. If they do exist theyd be really weird, floating free in space surrounded by a thick disk of dust revolving madly around a supermassive black hole just a few light years away. Not exactly prime real estate.
This is all so strange that Id love for them to exist just because its so cool! But given their location, I certainly wouldnt recommend visiting one.
Tip o the Schwarzschild radius to Jonathan OCallaghan.