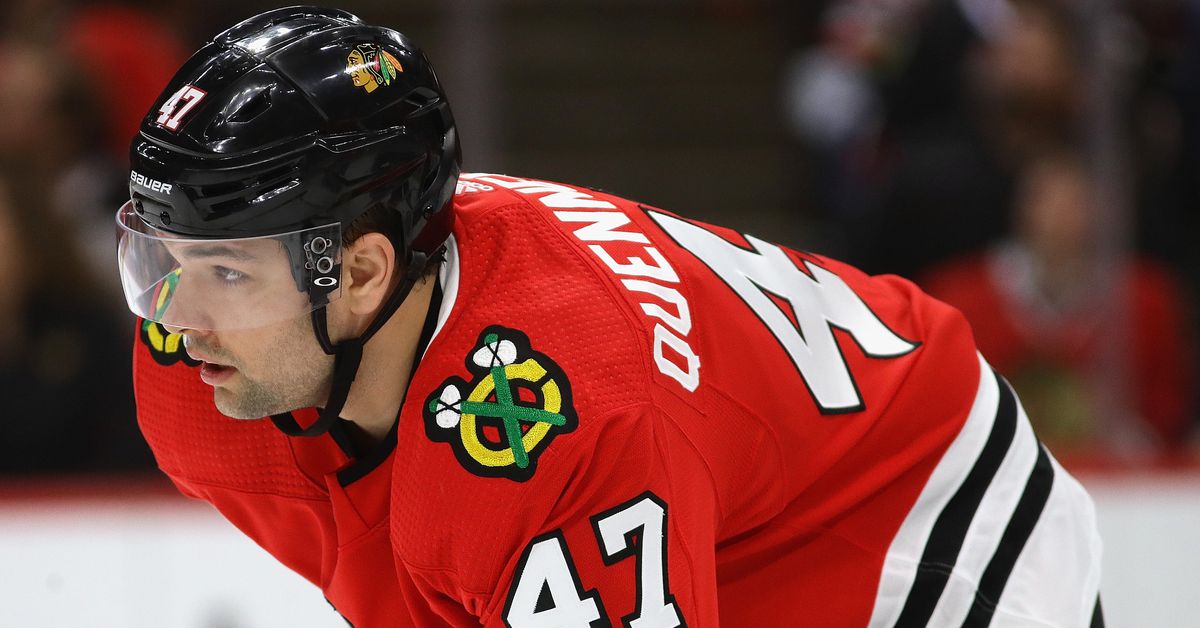 Blackhawks coach Jeremy Colliton had to make his first significant in-series lineup adjustment Monday for Game 2 against the Oilers.
With Drake Caggiula serving a one-game suspension for an illegal check to the head in Game 1, Colliton had five forwards to choose from to insert into the lineup. The catch? No matter who hed pick theyd be making their postseason debut.
Colliton made a surprising move and went with John Quenneville, who didnt have a particularly compelling training camp. Quenneville didnt have a particularly overwhelming season either, scoring .61 points per game in 36 AHL games with the Rockford IceHogs. He didnt score a point in nine NHL games this season with a 44.92 percent shot share and 39.83 percent expected goal share at even strength.
Quenneville had one hit, was on the ice for one high-danger chance and had a .09 individual expect goals mark, according to Evolving-Hockey, in only 6:04. He also had a 37.5 Corsi For percentage and 33.33 percent shot share at even strength. All this with all of his zone starts in the offensive zone.
So why would the Blackhawks turn to somebody whose biggest contributions in the regular season were his average time on ice (11:03) and 21 hits? Especially when players with more speed, like Brandon Hagel and Philipp Kurashev, and a more productive player like Dylan Sikura, were available.
We just felt that Quenneville could bring some size [6-foot-1, 194 pounds] and physicality, Colliton said. Obviously we miss that with [Caggiula] being out. Its unfortunate for him because we didnt have everyone going to play a four-line game. I think thats where he wouldve been able to have more of an impact.
Connor McDavid scored two of his three goals by the 4:05 mark of the first period, including one 19 seconds into the game, to put the Oilers up 2-0. Edmontons early lead led to Quenneville missing ice time as Colliton tried to get the Blackhawks going.
We had to shorten up right away because we just didnt have enough guys ready to play so I dont think it was through no fault of his own really that he all of sudden starts missing shifts pretty early on just because Im trying to manufacture lines that we felt could play, Colliton said. He needed to have some shifts in a four-line rotation to get into the game and feel comfortable and he didnt get that.
It was Sikura and not Quenneville that Colliton decided to play as the 13th forward in Chicagos 4-0 exhibition win against the Blues on July 29. Sikura even logged more ice time (6:12) as a 13th forward than Quenneville did as part of the four-line unit Monday. They both played nine NHL games this season, and Sikura scored three points (one goal, two assists), including his first career NHL goal while Quenneville had no points. Sikura also outperformed Quenneville in the AHL with 33 points (14 goals, 19 assists) in 45 games compared to 22 points (13 goals, nine assists) in 36 games.
Hagel played just one game in the regular season with the Blackhawks, making his NHL debut March 11 against the Sharks. He drew one penalty and had a takeaway in 11:48. He was also on the ice for two high-danger chances, while Quenneville was on the ice for five total in nine games. Hagel also had better even-strength possession stats, including a 52.94-percent shot share and 64.36-percent expected goal share. Granted the sample size isnt great because were comparing one game against the lowly Sharks to nine.
If the Blackhawks wanted to make a choice that wasnt Sikura, Hagel was available, and plays a game better suited to the Oilers speedy style, with better mobility and agility than Quenneville. Hagel also does a much better job of replicating Caggiulas contributions.
Its true Quenneville didnt allow a goal in a game that saw Edmonton score six times. But thats not an impressive statistic when player is on the ice for barely 10 percent of a game. David Kampf wasnt on the ice for a goal against in 8:30, and thats only on the doorstep of impressive (and Kampfs underlying numbers, including a 66.67 percent shot share and 64.71 CF% were better).
Collitons use of Quenneville also led to them perhaps overplaying Patrick Kane, who tied for the most minutes at even strength (16:15, with Connor Murphy) and had a 45.02 percent expected goal share and 36.36 percent shot share despite a 50 percent offensive zone start percentage.
Colliton didnt make the right choice replacing Caggiula and hopefully hell learn from it and give Hagel or Sikura a chance next time to show theyre worthy of the spot. Fortunately, Caggiula will be back for Game 3 on Wednesday, which could lead to reuniting the third line of Alex DeBrincat, Kirby Dach and Caggiula.
Stats from NaturalStatTrick.com, MoneyPuck.com, Hockey-Reference.com and Evolving-Hockey.com