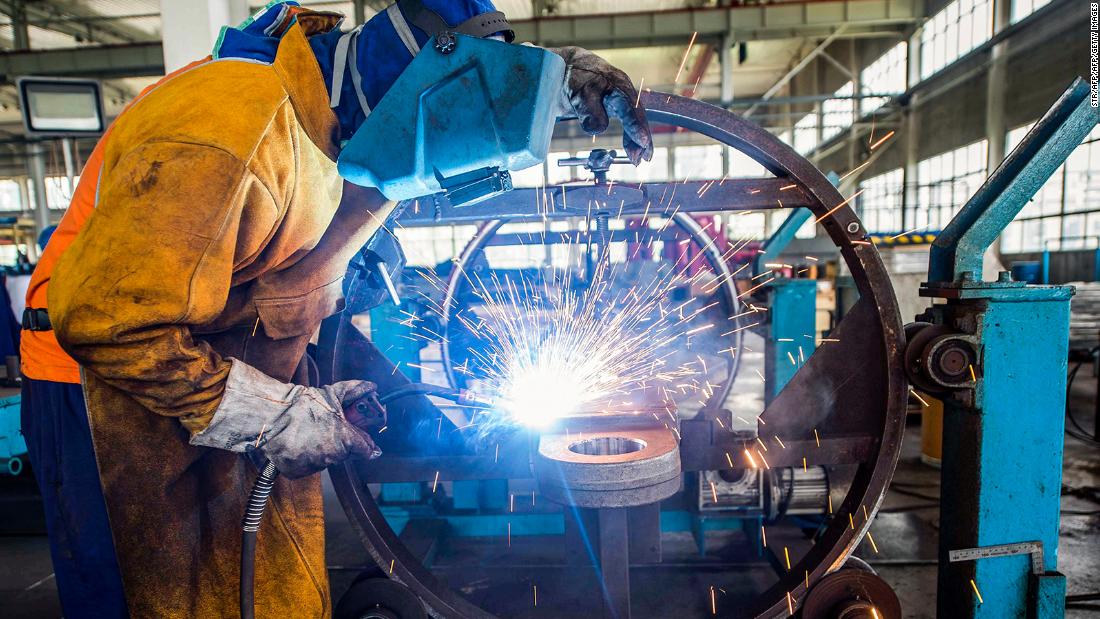 Hong Kong (CNN Business)Activity at China’s factories just grew at the fastest pace in nearly a decade, signaling that the country’s economic recovery is continuing to pick up momentum. But analysts warn that the coronavirus pandemic’s grip on much of the world could still hold back the second largest economy.
A private survey of manufacturing activity rose to 52.8 in July, up from June’s 51.2 as factories in the country picked up new orders. That’s the quickest rate since January 2011. The Caixin/Markit manufacturing Purchasing Managers’ Index beat market estimates and marked a third straight month the index remained above 50, the level that separates expansion from contraction.
The survey was the latest sign of improvement in China. The economy returned to growth last quarter after recording its worst three-month period in decades. And the country’s official PMI survey released Friday which mainly covers larger business and state-owned firms indicated a fifth consecutive month of expansion for the sector. (The Caixin poll is more focused on small and medium-sized companies.)
Stimulus measures in China have “paved the way for a period of above-trend growth in construction and industry,” wrote Julian Evans-Pritchard, senior China economist for Capital Economics, in a Monday research note. China promised in May it would throw 3.6 trillion yuan (roughly $500 billion) at its economy in extra stimulus measures, including allowing local governments to issue morebonds to build 5G networks, railways, and other infrastructure projects.
Evans-Pritchard added that the strength in manufacturing could offset struggles in other areas, including the services industry.
Despite the growth, Caixin’s survey revealed some weak spots. New export orders contracted for a seventh straight month as the coronavirus weighs on overseas demand.The labor market is also under strain, as firmsmaintaina cautious approach to hiring.
“We caution that manufacturing PMIs could moderate in coming months as recovery momentum softens across the world due to the protracted Covid-19 pandemic,” Nomura analystswrote in a Monday research note.
TheNomura analysts cautioned that the Chineseeconomy still faces many challenges. It has still proven tough for Beijing to convince people to spend money again. And rising US-China tensions could hit both exports and manufacturing investment.
“We believe it is still too early for Beijing to unwind or roll back the easing and stimulus measures it introduced” in the first half, they said, adding, though, that Beijing might be reluctant to roll out more stimulus in the second half of the year.
Beijing has recently indicated that it may continue to focus on boosting demand at home. “Domestic circulation” as the maindriver of future growth was the emphasis at a policy meeting last week held by the Politburo, the Communist Party’s top decision-making body.