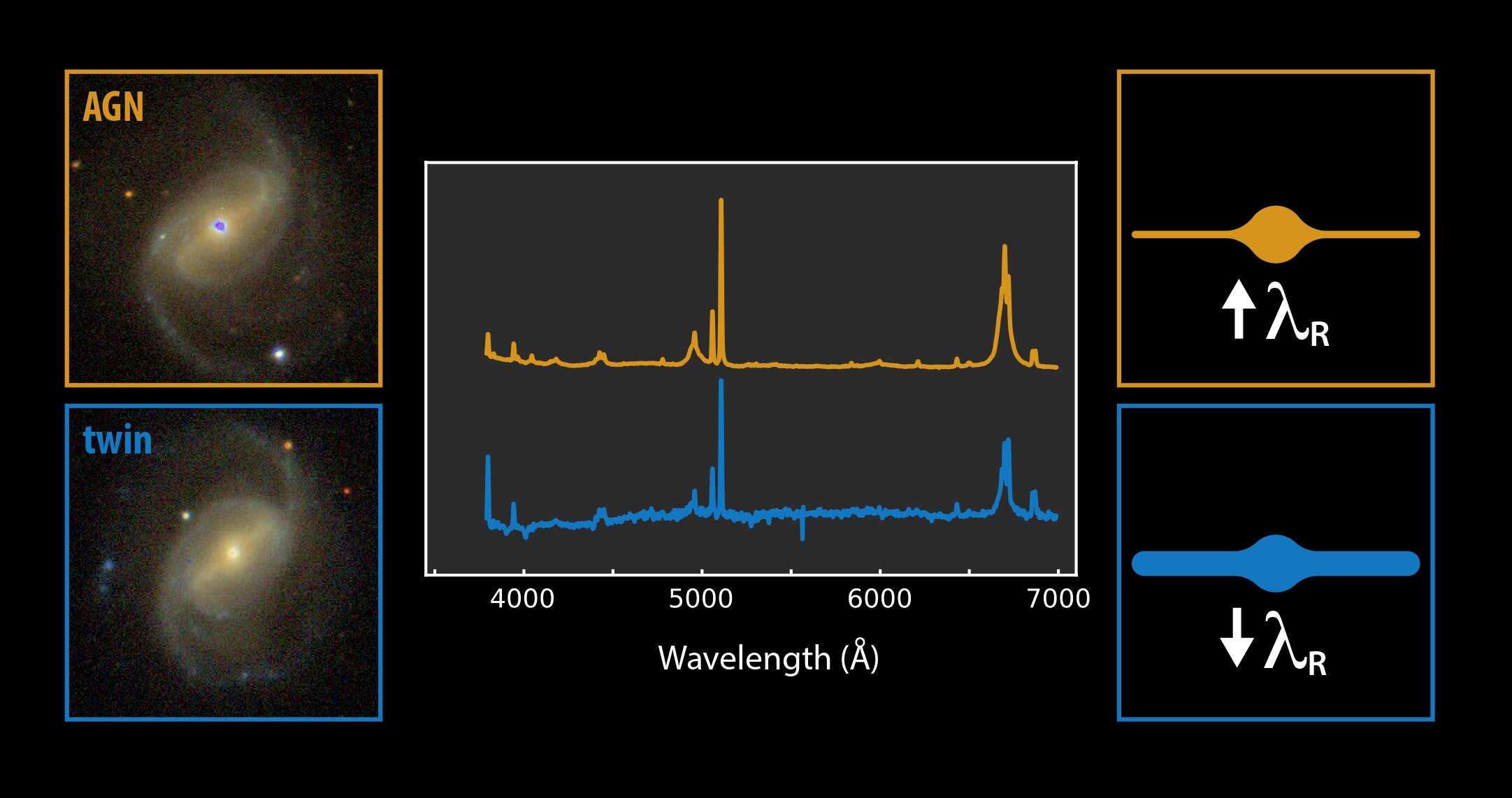 A study led by researchers at the Instituto de Astrofísica de Canarias (IAC) comparing the discs of several pairs of spiral galaxies, active and non-active, concludes that in the active discs, the rotational motion of the stars is of greater importance.
This study, just accepted for publication in Astronomy & Astrophysics, is the first evidence for large-scale dynamical differences between active and non-active galaxies in the local universe. The astronomers are from the Instituto de Astrofísica de Canarias (IAC) and the University of La Laguna (ULL); as well as the National Autonomous University of Mexico (UNAM), the Complutense University of Madrid (UCM) and the Instituto de Astrofísica de Andalucia (IAA).
There is now evidence that the supermassive black holes at the centers of the majority of galaxies have a basic influence on their evolution. In some of them, the black hole is ingesting the material surrounding it at a very high rate, emitting a large quantity of energy. In those cases, the galaxy has an active nucleus (AGN). The material that feeds the AGN must initially be quite distant from the nucleus, in the disc of the galaxy, rotating around its center. This gas must, one way or another, have been slowed in order to fall into the central zone, a process known as loss of angular momentum.
Ignacio del Moral Castro, a doctoral student in the IAC and the University of La Laguna (ULL) and first author of the article, says, “Studying the mechanisms that control the relation between the active nucleus and the rest of the galaxy is necessary to understand how these objects form and evolve, and to be able to throw light on this question, we need to compare active and non-active galaxies. With this purpose, the main idea of my doctoral thesis is centered on the study and comparison of galaxies that are almost twins, but with the difference being nuclear activity.”
The work has consisted of comparing the dynamics of the galactic discs of various active/non-active pairs. The researchers used data from the CALIFA survey (Calar Alto Legacy Integral Field Area). This contains spectroscopic data over complete 2-D fields for more than 600 galaxies taken at the Calar Alto Observatory in Almería, which allows observations of virtually the whole of each galaxy so that their global characteristics can be studied.
Novel methodology
Previously, in the majority of studies, researchers used a sample of active galaxies within a large survey, which were then compared to the rest of the galaxies in the survey having similar properties that do not show nuclear activity. However, this time, the researchers used a novel method: They performed one-to-one comparisons. First, they identified active spiral galaxies in the CALIFA sample, and for each of them, they looked for a non-active galaxy with equivalent global properties, i.e., with the same mass, brightness, orientation and so on, and very similar in appearance.
Using this method, the team put forward two scenarios to explain the dynamical differences between active and non-active galaxies. In the first, the explanation would be that it is the trace of the angular momentum transfer between the gas which has fallen into the center and the material which remains in the disc. The second attributes the difference to the infall of gas from outside, via the capture of small nearby satellite galaxies; such capture should occur more frequently in active galaxies. Both scenarios are compatible with this result and they are not mutually exclusive.
“The result surprised us; we really didn’t expect to find this type of difference on a large scale, give that the duration of the active phase is very short in comparison with the lifetime of a galaxy, and with the time needed to produce morphological and dynamical changes,” says Begoña García Lorenzo, and IAC researcher, and a coauthor of the article.
“Up to now, we thought that all galaxies go through active phases during their lifetimes, but this result could mean that this is not the case, which would imply a major change to current models,” adds Cristina Ramos Almeida, also an IAC researcher and coauthor of the article.
More information:
I. del Moral-Castro et al, Larger R in the disc of isolated active spiral galaxies than in their non-active twins, Astronomy & Astrophysics (2020). DOI: 10.1051/0004-6361/202038091
Citation:
Differences between discs of active and non-active galaxies detected for the first time (2020, August 3)
retrieved 3 August 2020
from https://phys.org/news/2020-08-differences-discs-non-active-galaxies.html
This document is subject to copyright. Apart from any fair dealing for the purpose of private study or research, no
part may be reproduced without the written permission. The content is provided for information purposes only.