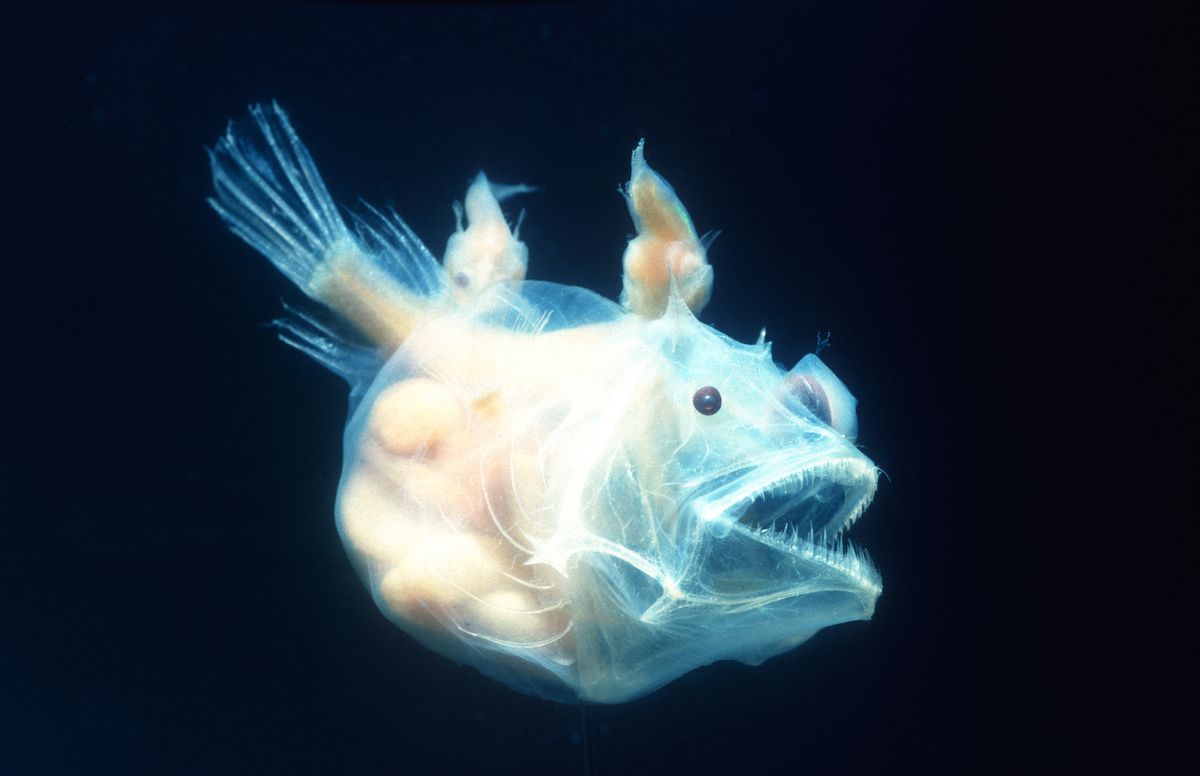 When it comes to dating in the abyssal depths of the ocean, appearance doesn’t matter much. That’s fortunate foranglerfish
, which resemble nightmarish fanged potatoes with a little reading lamp on top. And those are just the females.
If you’ve never seen a male anglerfish before, you’re not missing much. Measuring just a few centimeters long on average, male anglers are a mere fraction of their partners’ size, and contribute a fraction of the work to their relationships. For many anglerfish species, the male’s sole responsibility is to permanently latch onto an obliging mate, fuse his circulatory system
with hers, then slowly allow his eyes, fins and most of his internal organs to degenerate until he becomes what biologistStephen Jay Gould called
“a penis with a heart.” The male gets constant nourishment; the female gets sperm on demand. The anglerfish circle of life spins on.
It’s beautiful, we know. But this unique mating ritual — which biologists call “sexual parasitism
” — has long stumped researchers. How could the female angler’simmune system
even allow such a permanent, parasitic union to occur? Humans have a hard-enough time accepting organ transplants that don’t precisely match their own tissues, so how does a female anglerfish’s body accept a male’s (or, in some cases, up to eight simultaneous males) so willingly? A genetic study published July 30 in the journalScience
finally offers an answer: Anglerfish mating is only possible because the fish have somehow evolved away some of their most crucial immune defenses.
A female anglerfish with a parasitic male fused to her back. (Image credit: Theodore W. Pietsch)
“For humans, the combined loss of important immune facilities observed in anglerfishes would result in fatal immunodeficiency,” study co-author Thomas Boehm, director at the Max Planck Institute of Immunobiology and Epigenetics in Germany,said in a statement
. “We assume that as yet unknown evolutionary forces first drive changes in the immune system, which are then exploited for the evolution of sexual parasitism.”
Related: Photos: The world’s freakiest-looking fish
In the new study, Boehm and his colleagues analyzed the genomes of 10 different species of anglerfish, including species that fuse permanently during reproduction and species that fuse only temporarily. In both groups, the team found a clear absence of genes crucial to the fish’santibody
response — that is, how effectively the fish’s immune system is able to find and identify foreign invaders.
For anglerfish that fuse permanently during mating, even more immunological hardware was missing. In addition to lacking even more genes related to antibodies, the perma-fusers also lacked genes responsible for encoding killer T cells, which normally attack infected cells or foreign tissues, the researchers said. Overall, it seemed that evolution had totally deleted the adaptive immune system — the part of the immune response that identifies and attacks specific foreign invaders — from these sexually parasitic fishes.
Strangely, anglerfish seem to have had no problem adapting to the deep sea — an ecosystem with no shortage of parasitic microbes — despite their missing immune machinery. It’s likely, the researchers wrote in the study, that anglerfish compensate for their lack of adaptive immunity with a beefed-up innate immune system. In other words, they must have some pre-existing, nonspecific defenses that protect them from a wide variety of pathogens without interrupting their invasive mating process.
It’s still unclear what those inborn defenses might be — but, whatever they are, they only make anglerfish an even more unique outlier among the world’s vertebrates. It may be hard to believe, but it looks like anglerfish are even weirder than we thought.
Originally published on Live Science.