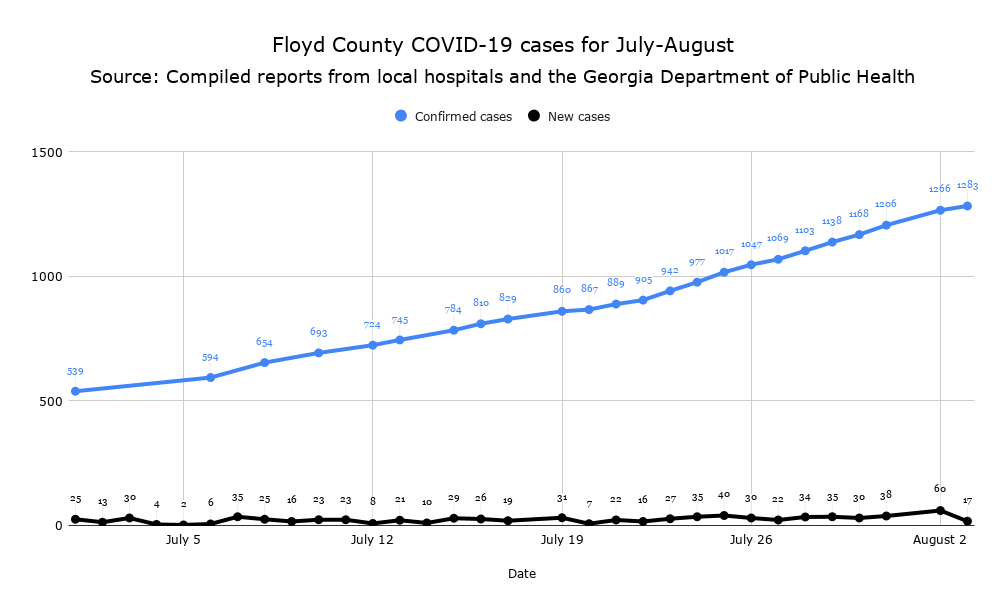 Floyd County logged another 77 COVID-19 cases from Saturday to Monday, bringing the number of residents who have tested positive for the disease to 1,283.
In the past two weeks there have been 383 Floyd County residents confirmed positive for the disease caused by the coronavirus.
Floyd Medical Center and Redmond Regional Medical Center were treating 66 COVID-19 positive patients on Monday, according to numbers released by the Floyd County Emergency Management Agency.
Some of those patients are from surrounding counties and and a few are patients from other regions, including South Georgia.
Floyd Medical Center began the process this afternoon of moving non-ICU COVID-19 patients to a 20-bed mobile intensive care unit, FMC spokesperson Dan Bevels said. The unit was brought in by the Georgia Emergency Management Agency as an overflow facility for the region. The patients are being moved to open up room in the main building for those patients with more acute conditions.
There have been no new fatalities since the 15th death recorded in late May.
Statewide, 2,271 new cases were confirmed Monday, according to the Georgia Department of Public Health. Thats a positive rate of 12% out of the 21,761 test results returned. Two Georgians died of the disease on Monday and 60 were hospitalized.
Meanwhile, the debate is ramping up over who will get vaccines once one is available.
U.S. health authorities hope by late next month to have some draft guidance on how to ration initial doses, but its a vexing decision.
Not everybodys going to like the answer, Dr. Francis Collins, director of the National Institutes of Health, recently told one of the advisory groups the government asked to help decide. There will be many people who feel that they should have been at the top of the list.
Traditionally, first in line for a scarce vaccine are health workers and the people most vulnerable to the targeted infection.
But Collins tossed new ideas into the mix: Consider geography and give priority to people where an outbreak is hitting hardest.
And dont forget volunteers in the final stage of vaccine testing who get dummy shots, the comparison group needed to tell if the real shots truly work.
We owe them … some special priority, Collins said.
Huge studies this summer aim to prove which of several experimental COVID-19 vaccines are safe and effective.
Moderna Inc. and Pfizer Inc. began tests last week that eventually will include 30,000 volunteers each; in the next few months, equally large calls for volunteers will go out to test shots made by AstraZeneca, Johnson & Johnson and Novavax. And some vaccines made in China are in smaller late-stage studies in other countries.
For all the promises of the U.S. stockpiling millions of doses, the hard truth: Even if a vaccine is declared safe and effective by years end, there wont be enough for everyone who wants it right away especially as most potential vaccines require two doses.
With vaccine misinformation abounding and fears that politics might intrude, CDC Director Robert Redfield said the public must see vaccine allocation as equitable, fair and transparent.
Whoever gets to go first, a mass vaccination campaign while people are supposed to be keeping their distance is a tall order. During the 2009 swine flu pandemic, families waited in long lines in parking lots and at health departments when their turn came up, crowding that authorities know they must avoid this time around.
Operation Warp Speed, the Trump administrations effort to speed vaccine manufacturing and distribution, is working out how to rapidly transport the right number of doses to wherever vaccinations are set to occur.
Drive-through vaccinations, pop-up clinics and other innovative ideas are all on the table, said CDCs Dr. Nancy Messonnier.
As soon as a vaccine is declared effective, we want to be able the next day, frankly, to start these programs, Messonnier said. Its a long road.
Editor John Bailey and AP medical writer Lauran Neergaard contributed to this report.