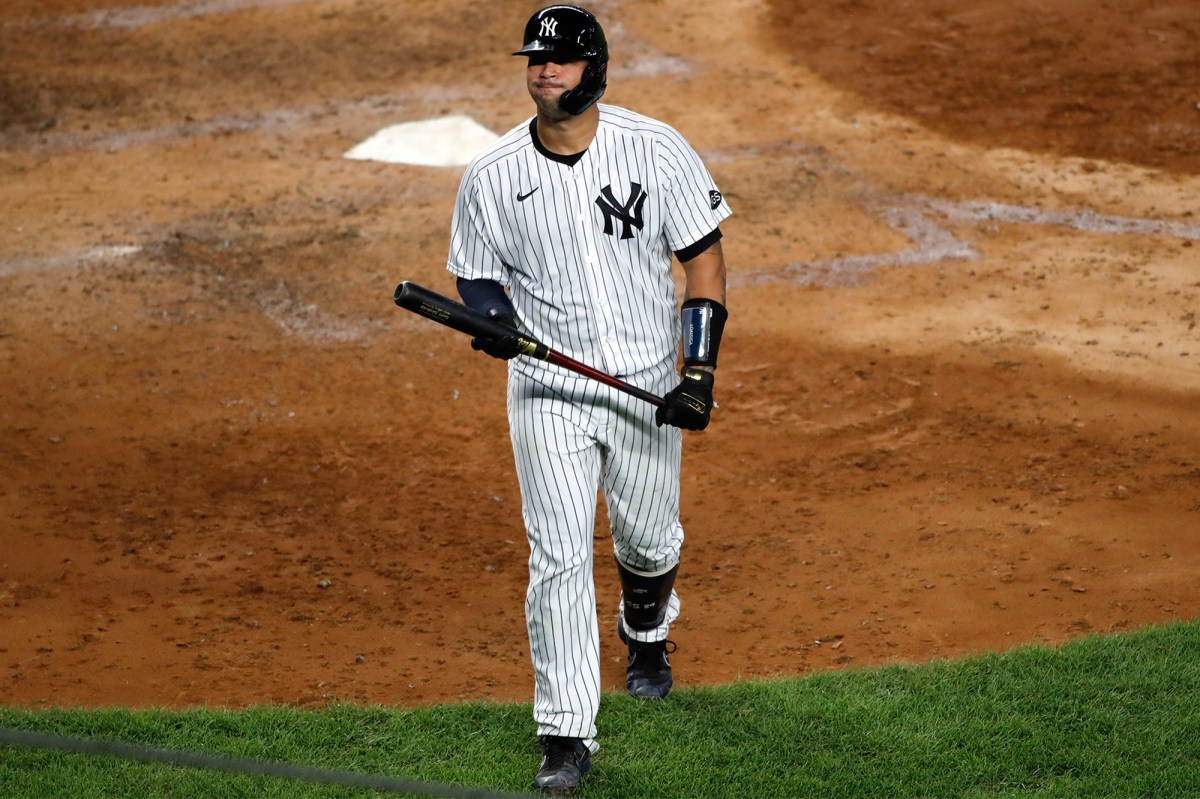 Gary Sanchez is missing.
Not missing like when the Mets scared the daylights out of everyone by announcing they couldnt find Yoenis Cespedes, even though they had a pretty good idea what happened to him. Missing as in swinging at baseballs and failing to connect with them at an alarming rate.
Even an 8-1 start to a 60-game sprint can bring 100-percent agita, and so it is that Sanchez, the Yankees catching prodigy, has produced a characteristic storm with his horrid hitting out of the gate. When the Yankees resume action Wednesday with a doubleheader against the Phillies at Citizens Bank Park, Sanchez will show up with an unsightly .080/.148/.120 slash line lowlighted by 14 strikeouts in 27 plate appearances.
The Yankees obviously can survive this Sanchez slide; theyre 8-1! Yet this small-sampled swan dive only intensifies the chatter that always seems to surround Sanchez, The Bronxs version of the Coney Island Cyclone roller coaster.
I go back to the last at-bat in Baltimore that I thought was good, and then he had … a couple of games in the Boston series where I thought he was better, Aaron Boone said late Monday night, following the Yankees 6-3 victory over Joe Girardis Phillies. Tonight, maybe a couple pitches off the plate that got him behind in the count, and then just a little bit racing out there kind of chasing that hit a little bit.
Gary SanchezCharles Wenzelberg/New York Post
Hes just got to continue to trust that he can control the zone and really stay in his legs and when he does, that hell take off.
Lets break down the managers assessment:
1. In that last at-bat in Baltimore, July 31, Sanchez finished a competitive, seven-pitch battle against the Orioles Mychal Givens with a foul-tip strikeout. Hey, in the Land of Swings and Misses, a foul tip might get you a Cabinet post.
2. Sanchez played in the last two contests during the Yankees three-game sweep of the Red Sox. He went 2-for-7 with a walk, double and RBI and only two strikeouts.
3. On Monday night, Sanchez put up an 0-for-3 outing, lining out to left field in his first at-bat and then struck out twice more, chasing a Jake Arrieta slider well out of the strike zone in the fourth inning for a three-pitch strikeout and doing the same on a Deolis Guerra slider in the sixth for a four-pitch trip back to the bench.
Summary: The highs have been moderate, the lows rock-bottom.
What stands out most, doing a deep dive into this shallow pool of data, is those misses. As per Baseball Savant, Sanchez actually has chased fewer pitches this year than last; he is swinging at 32.4 percent of the balls he sees out of the strike zone compared to 33.4 percent last year. In 2019, however, he made contact on 52.7 percent of the pitches he chased, a tribute to his Yankees catching ancestor Yogi Berra who could hit anything anywhere. This year, that number has dropped to 36.4 percent. Thats how you get a 51.9 percent strikeout percentage.
This represents the latest chapter in the Sanchez saga, in which he followed his spectacular rookie (not even) half-season of 2016 with a stellar 2017, fell off a cliff in Boones rookie managerial campaign 2018 and climbed back last year, his defense ebbing and flowing as he improved his pitch-blocking while his pitch-framing grew worse. You need TUMS just to digest it all.
Typical of Sanchezs dizzying nature, he has drawn high praise from the Yankees new ace as he flails at the plate.
I think its going great, Gerrit Cole, who has worked with Sanchez for all three of his Yankees starts (all of them wins), said Monday after lifting his record to 3-0. Hes been on his game behind the dish, especially pitch-calling and picking up some tips here and there.
So its not easy to not take the offense out on the field. But as players, we all understand that, and so its easy to rally around a guy thats really taking pride in his defense even though he may be a little frustrated with how its going in the batters box.
The Yankees should and will stick with Sanchez. The ride produces more good times than bad. That doesnt make the dips any less unsettling, though, right?