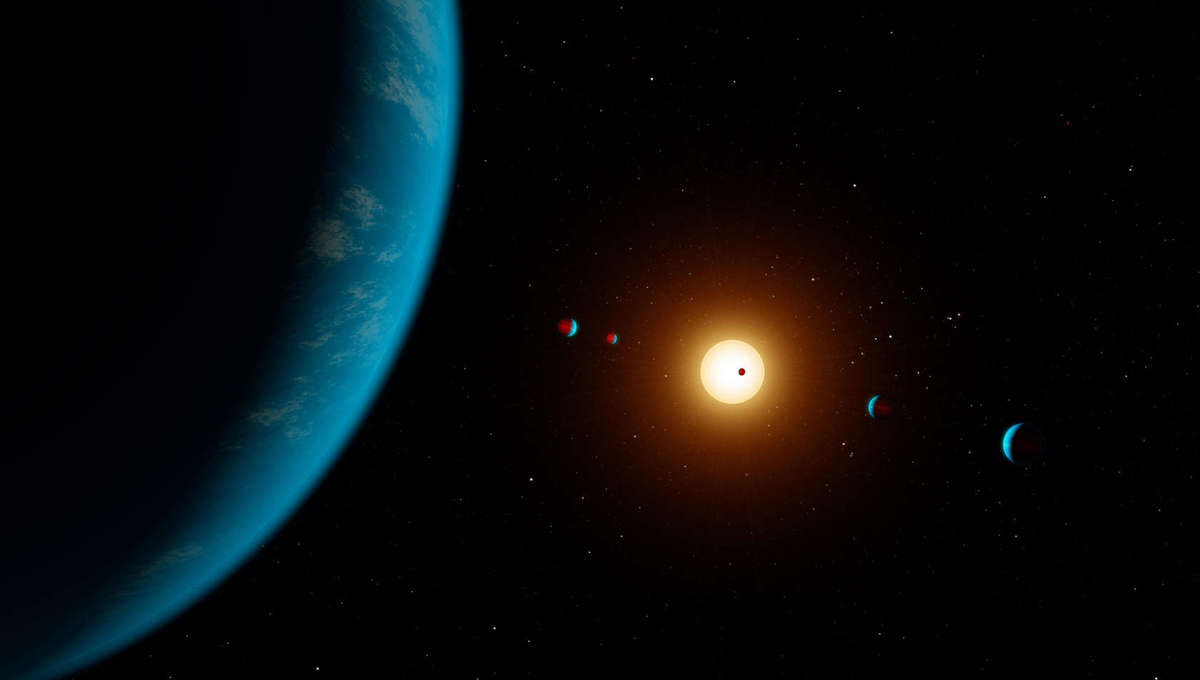 How many habitable planets can you have orbiting a single star?
In our solar system, only one planet is actually habitable in a narrow sense of the word: Earth. Mars is too cold with air too thin, and Venus just the opposite.
But thats happenstance. If you swapped the positions of Mars and Venus, and maybe swapped a significant fraction of Venus atmosphere, their temperatures would be a lot more suited for us*. Thats because both are in our Suns habitable zone, the range of distance from our star where liquid water could exist on a planets surface.
The idea of a habitable zone is a bit squishy, because having liquid water depends on a laundry list of other things, including the existence of an atmosphere, whats in it, and more. But its a useful concept as long as you dont look at it too closely.
So technically, three planets orbit the Sun in its habitable zone. But how many could you fit in there?
At some number youd hit a limit. The finite region of space means planets would get too close together. Theyd interact gravitationally, and celestial hijinks would ensue: Theyd create chaos, and some planet or planets would have their orbit messed up, dropping them into the Sun or ejecting them from the system entirely.
Also, a stars habitable zone depends on how hot it is. When you do the math, you find a cool red dwarf has a small, narrow one, while a massive blue star has a huge habitable zone that extends out a long way.
So when we look to other stars, should we expect to see systems like ours, with few planets in the habitable zone, or can there be more stuffed in there?
A team of astronomers took a look at this, using software that calculates the gravity and motion of a system of planets over time to check for stability. For a given star mass, they calculated the size of the habitable zone, then placed one Earth-mass planet on the inside edge of the zone, another at the outside edge, and then added more evenly-spaced between the two. For every kind of star they ran the simulation for a total of 5, 6, and 7 planets, letting the simulation go for 100 million orbits of the inner planet to give things a good long time to play out.
What they found is pretty cool. For very low mass stars, say 0.1 times the Suns mass, no system is stable. The habitable zone is too narrow, so the planets always interacted. However, once you get up to stars with 0.2 times the Suns mass (still pretty low, so were talking red dwarfs here) the zone widened enough that every 5-planet system was stable. For stars with 0.7 or so times the Suns mass, 6-planet systems do pretty well, too.
For some narrow mass ranges of stars, 7-planet systems wind up being stable as well. Youd think that a more massive star means a bigger habitable zone, so more planets would fit in, but theres a monkey in that wrench: Resonances. If one or more planets have orbital periods that are simple fractions of each other, like 2:1, or 5:4, they periodically tug on each other, adding or removing orbital energy. Its like kicking your legs at the right time on a swing, amplifying your motion.
In this case though, resonances can spell doom for a system. For certain size habitable zones and stellar masses the planets find themselves in a resonance, and the orbits become unstable. Thats why a lower mass star might be able to hold on to more planets than a higher mass one. There might be no resonances in the habitable zone for the smaller star, whereas there are for the bigger one.
Theres another problem, too, and its literally a big one: Giant planets orbiting outside the habitable zone. They influence inner planets, and can create even more instabilities, making it harder to pack a stars habitable zone with Earth-sized planets. If a star lacks those giant planets then its all good, but if it has one or more as ours does  that can seriously drop the number of stable planetary habitable zone orbits.
There are more subtle things to look out for, too. As a star ages it gets hotter, so its habitable zone moves outward. A planet that orbits on the inside edge of a stars habitable zone might find itself getting uncomfortably warm after a few billion years.
Also, they didnt look at lower mass planets (like, say, Mars) or planets on elliptical orbits. Tilting the orbits a bit can prevent resonances from making a mess of things, too. Clearly, theres room here for running lots more simulations on this.
Itll be a while before this prediction can be checked in the real Universe, though. Finding that many planets around a star is rare (TRAPPIST-1 being one of a few exceptions so far) and it gets harder for more massive stars, where the planets are farther out from the star; our best detection methods work well for closer-in planets.
But what a thing to learn! Will we find systems with 5 planets in their habitable zone? And if so, how many will actually be habitable?
The Universe is a pretty cool place, and loves diversity. If I had to bet, Id say such systems exist. Rare, but out there. How long will it be before we find one?
*Wed still need to give them both oxygen and probably replace the CO2 with nitrogen, but go with me here.
Also, its possible to have undersurface oceans in icy moons around gas giants, so again the habitable zone concept is a bit limited. Its more of a good place to start then the be-all of looking for clement places in the Universe.