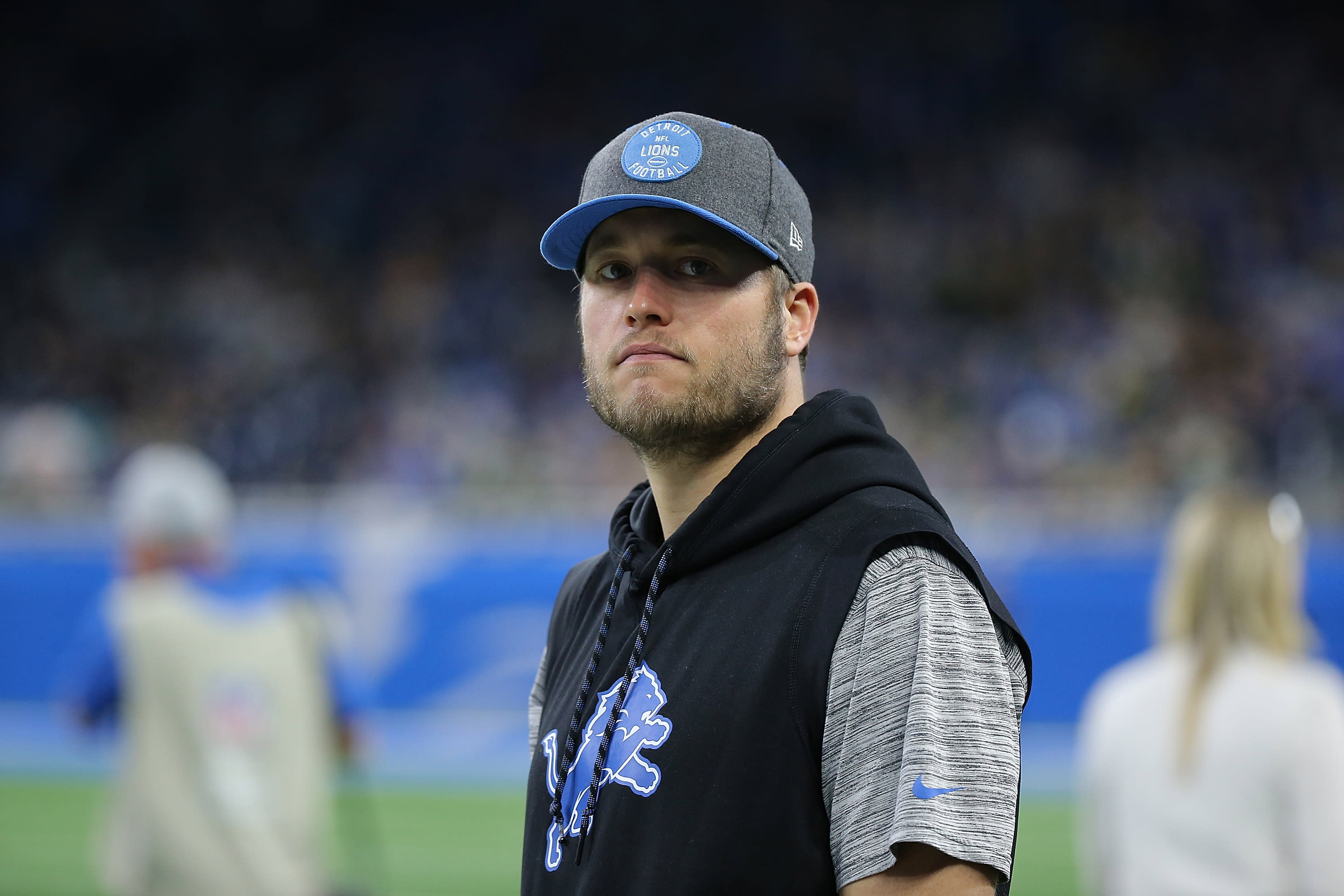 No one said this was going to be easy. No one said it was going to go perfectly.
If you want the NFL back, then this is what you are going to deal with a big swirling mess of a season. That includes the occasional false positive test, including ones that could significantly impact games, not to mention completely alter the personal lives of all involved.
First, the good news: Detroit Lions quarterback Matthew Stafford doesnt have the coronavirus.
An NFL-administered test over the weekend said he did. As a result, the Lions listed Stafford on the reserve/COVID-19 list. Then, further tests came back negative, and Stafford, who never displayed symptoms, was determined to have been the victim of a false positive.
To be clear, Matthew does NOT have COVID-19 and never has had COVID-19 and the test in question was a False-Positive, the team said in a statement. Also, all of Matthews family have been tested and everyone is negative.
Thats good news.
Detroit Lions quarterback Matthew Stafford had a false positive COVID-19 test that landed him on the NFL’s new “reserve/COVID-19” list. That’s just the beginning of a messy 2020 NFL season. (Leon Halip/Getty Images)
More
Even better, in this case, it occurred during the start of training camp and not in the middle of the season when the confusion could have cost Detroit its most important player for a critical game (more on that later).
The bad news is everything else.
Stafford is a big name, but this wasnt a huge deal because the NFL season doesnt begin until September. It was a major development, however, for him and his wife, Kelly, who underwent brain surgery in 2019 and their four young children.
Kelly Stafford details somewhat of a nightmare after false positive
Kelly Stafford took to Instagram on Tuesday to declare the ordeal somewhat of a nightmare.
It wasnt just the understandable scare, or even the fact that Matthew, and everyone else in the family, needed to be tested repeatedly. It also included the fact that even after the NFL had determined it was a false positive, that info clearing the Staffords was made public.
Our school told us they were not allowed back, Kelly Stafford wrote. I was approached in a grocery store and told I was endangering others, my kids were harassed and kicked off a playground, I was told I needed to wait in my car when trying to pick up food, and the people closest to us had to get tested just so they could go back to work.
Kelly Stafford said she didnt blame people who had that reaction. It is understandable since they had read about a positive and were concerned about the spread. She did, though, rip the NFL.
These are peoples lives and livelihoods that are in those results in THEIR test sites, she wrote. Maybe we should be absolutely positive a person has COVID before releasing that info to the world.
Kelly Staffords frustrations are understandable, but this is the new normal of whatever the 2020 NFL season is going to look like.
Testing will always be imperfect. It is also necessary. False positives can be unnerving, but they happen. Its not like the NFL wants them to occur. Hopefully, testing will continue to improve.
These are the protocols and systems it set up, and every player who chooses to play this year knew it when he made that decision. There are many, many benefits (including many, many dollars) that come with being a bold-named NFL star. This is one of the negatives.
If you want to try to play in 2020, however, then this is the deal.
NFLs process of reporting coronavirus cases
Maybe the NFL doesnt need to immediately release the names of positive tests during training camp, but once the season begins, it does. The NFL has long required teams to disclose injuries during the season both for competitive and gambling reasons. Its one thing to prepare for the Lions if Stafford is going to be the quarterback, only to find out he hasnt practiced all week due to a broken ankle … or a virus.
The false positives, however, can (and will) wreck all of that.
What if the four days that Stafford was presumed to be out with COVID-19 took place as an opponent prepped for the Lions, only to have him available on Sunday? The NFL requires injuries to be judged on a sliding scale.
During the week, teams must disclose whether a player is out (meaning he wont play that week) or one of three distinctions when it comes to practice: did not participate, limited participation and full participation. Additionally, the range for the teams injury report is: out, doubtful, questionable and probable.
At least opponents (and gamblers) have some inkling of whats to come, although plenty of complaints have been lodged through the years about the ratings accuracy.
What do you do about a false positive? In this case, Stafford would have been out only to suddenly be in.
And what about if this was a late week test, where Stafford could have been forced to miss a game that could determine a playoff bid, only to later find out it was nothing? What if it happens during the playoffs or even the Super Bowl?
Not good. A total nightmare even. Yet, whats the alternative?
This is 2020, you cant let perfect be the enemy of progress because perfect isnt attainable, even by an NFL that doesnt like to leave anything to chance.
This entire year feels like a false positive, football included.
More from Yahoo Sports: