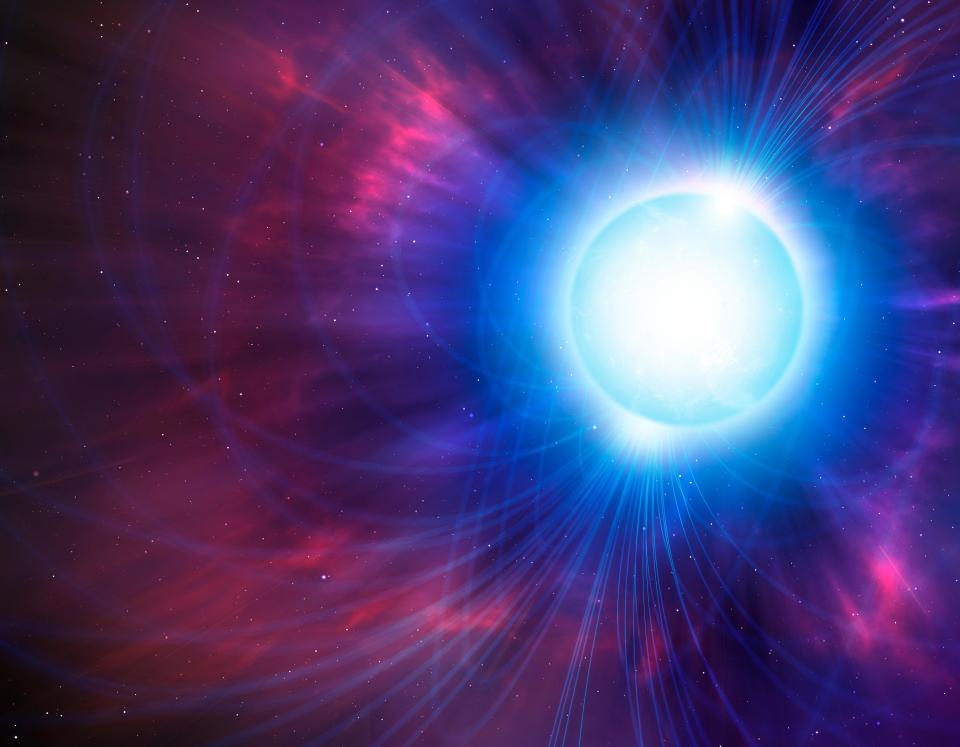 SCIENTISTS have traced mysterious radio signals detected on Earth to a dead star within our Milky Way galaxy.
The millisecond-long burst of radiation was emitted by a magnestar a type of star with an extremely powerful magnetic field roughly 14,000 light-years away, according to a study.
A mysterious burst of radio signals detected on Earth has been traced back to a magnetar within our Milky Way galaxy. Pictured is an artist impression of a magnestar
Known as Fast Radio Bursts (FRBs), signals such as this have baffled scientists for years and typically originate from far beyond the Milky Way.
Their origins are unknown. Some think the energetic waves are the result of cosmic explosions, while others have controversially suggested they’re signals sent by aliens.
Picked up by radio telescopes worldwide in April, the FRB examined in the new study was the first to be detected from inside the Milky Way.
Astronomers traced it back to a magnetar called SGR 1935+2154, potentially settling the debate on where FRBs come from.
Some experts have controversially suggested that Fast Radio Bursts are signals sent by aliensCredit: BBC Handout
“This is the first ever observational connection between magnetars and Fast Radio Bursts,” said astrophysicist Dr Sandro Mereghetti of the National Institute for Astrophysics in Italy.
“It truly is a major discovery, and helps to bring the origin of these mysterious phenomena into focus.”
Fast Radio Bursts (FRB) are intense pulses of radio waves that last no longer than the blink of an eye and produce the energy of millions of Suns.
More than 100 FRBs have been discovered to date, but only a handful have repeated, and fewer still in a predictable pattern.
This makes them notoriously difficult to study, meaning their origins have eluded scientists since the signals were first detected in 2007.
For the new study, carried out by an international team, researchers analysed data from the European Space Agency’s INTEGRAL satellite.
Fast Radio Bursts typically originate from outside our galaxyCredit: NASA
They found that the burst from the magnetar SGR was weaker than FRBs detected from outside our galaxy.
Magnestars are a type of neutron star collapsed remnants of stars that sport powerful magnetic fields.
Sometimes, their magnetic fields can warp the star’s shape and trigger eruptions of huge bursts of radiation in what scientists call a “starquake”.
Very few starquakes have been detected by scientists, and fewer still have been caught emitting radio waves.
Following the detection of the April FRB, a number of scientists suggested it had come from SGR 1935+2154, a theory confirmed by the new study.
“This is a very intriguing result and supports the association between FRBs and magnetars,” Dr Mereghetti told ScienceAlert earlier this year.
What are FRBs, and why are they important?
Here’s what you need to know…

Though the evidence now points strongly in favour of magnestars being the source of all FRBs, the study is not conclusive.
It’s possible other stellar phenomena may also lead to the eruption of the mysterious signals.
That could mean the dying embers of a huge star, black holes, or something never before detected by humans.
At least one scientist has suggested the signals could be produced by alien spaceships. However, the majority of experts disagree with this theory.
Whatever their origins, FRBs have the potential to be a new tool that we can use to understand the structure of matter in the universe.
The radio bursts were first discovered in 2007, so small even steps toward understanding their source offers big excitement for astronomers.
Scientist Seth Shostak from the SETI Institutes explains what Fast Radio Bursts are
In other news, astronomers have spotted the Moon flashing at us “over and over”.
Babies born today will see the first “self-sustaining human colony” on Mars.
And, scientists have failed to find alien life in scans of 1,300 stars  but say theyre not giving up yet.
Do you think there is intelligent life out in the universe? Let us know in the comments…
We pay for your stories! Do you have a story for The Sun Online Tech & Science team? Email us at tech@the-sun.co.uk