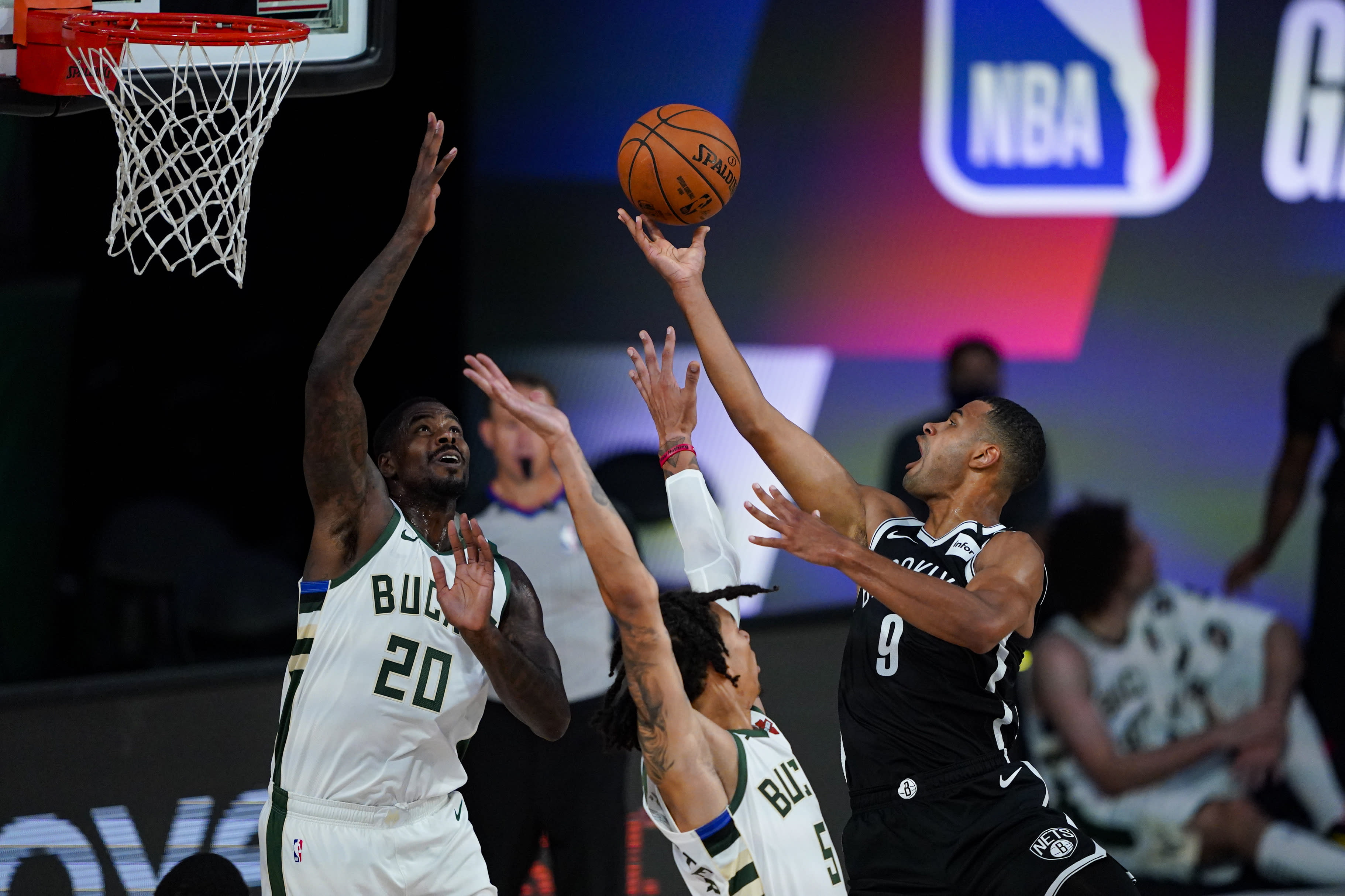 If you wanted to get a bet down on the first NBA game of the day Tuesday, you might have wondered if youd stumbled upon a 1 vs. 16 NCAA tournament game.
What fans got was a repeat of University of Maryland, Baltimore County.
The Brooklyn Nets win wont resonate like UMBC over Virginia, but it is one of the largest known upsets in NBA history in terms of the point spread.
The spread for the Milwaukee Bucks-Nets game was 18.5 at BetMGM. BetMGM said it hadnt had a spread that high for an NBA game in at least 10 years. The moneyline on Milwaukee was as high as -5000, meaning a bettor had to bet $500 on the Bucks to win $10. And the Nets won straight up, 119-116. Its the largest NBA upset in terms of the point spread since 1993, when Dallas won as a 19.5-point underdog against Seattle, according to ESPN Stats and Info.
That made at least a couple of bettors in New Jersey quite happy.
Nets pull off enormous upset
There has to be a pretty special circumstance for an NBA game to have an 18.5-point spread.
The circumstance was that the Nets were playing with virtual unknowns. They were already down several key players coming into the Orlando bubble, then they decided to sit their top three players Caris LeVert, Joe Harris and Jarrett Allen against the powerful Bucks. That led to a starting lineup of: Rodions Kurucs, Timothe Luwawu-Cabarrot, Lance Thomas, Tyler Johnson and Garrett Temple.
If you recognize any of those names, you might watch a little too much NBA basketball. Temple, at 10.1 points per game, was the only Nets starter averaging more than 7 points per game this season. The other four had combined for seven starts all season.
The Nets started well. They led 17-16 at the first media timeout. The Nets led 22-21 later in the first quarter even with the Bucks shooting well from 3.
The Nets kept it going, leading 40-34 after the first quarter and 73-65 at halftime. The Bucks were -11 in the first half. Milwaukee has by far the best defensive rating in the NBA this season, but it didnt look like it against the Nets JV team.
The Nets never let up. They had a 7-point lead early in the fourth quarter. At about that time, they became the favorite on the live betting line at BetMGM. The Bucks took the lead in the fourth quarter but the Nets came right back and finished the win. Luwawu-Cabwith, with a 5.9-point career average coming in, scored 26 points on 8-of-12 shooting. He hit 5-of-7 3-pointers.
The Bucks had almost nothing to play for, having wrapped up the best record in the Eastern Conference, and starters like Giannis Antetokounmpo and Khris Middleton werent in during a tight fourth quarter.
Still, a win is a win, especially for anyone brave enough to bet the Nets.
Some bettors took Nets straight up
According to Elisa Richardson, the head of PR at BetMGM, there were two significant moneyline bets on the Nets at BetMGM in New Jersey. One was a $600 wager at 13-to-1 to pay out $7,800, and there was a $400 bet at 13-to-1 to pay out $5,200.
There was also an $11,000 wager to win $1,833 on the Bucks moneyline in the first quarter. That bet lost when the Nets led at the end of one quarter.
Richardson said before the game 60 percent of bets were on the Nets and 40 percent were on the Bucks, though the Bucks had more money bet on them. That means a lot of small bets were on the Nets, with larger bets on the Bucks.
The largest known point spread for an NBA game, according to multiple sources, came in 2008 when the Boston Celtics were a 22.5-point favorite over the Miami Heat. The Heat were a 13-59 coming into the game and the Celtics, with Ray Allen, Paul Pierce and Kevin Garnett, were 57-15. The Celtics won 88-62. Chris Quinn and Ricky Davis each scored 14 to lead the Heat.
Upsets like the Nets win dont happen often. When a 7-64 Mavericks team pulled off the upset against the SuperSonics on April 6, 1993, eight players scored in double digits and the Mavs shot 57.3 percent from the floor. The Phoenix Suns pulled off a major upset in 2019, beating the Golden State Warriors straight up as 17-point underdogs. But what the Nets did Tuesday is pretty special.
Its rare to see a team getting as many as 18.5 points in an NBA game. Its even more rare to see an underdog that big win straight up.
More from Yahoo Sports:

August’s Sturgeon Moon, and other full moon dates for 2020 – Telegraph.co.uk