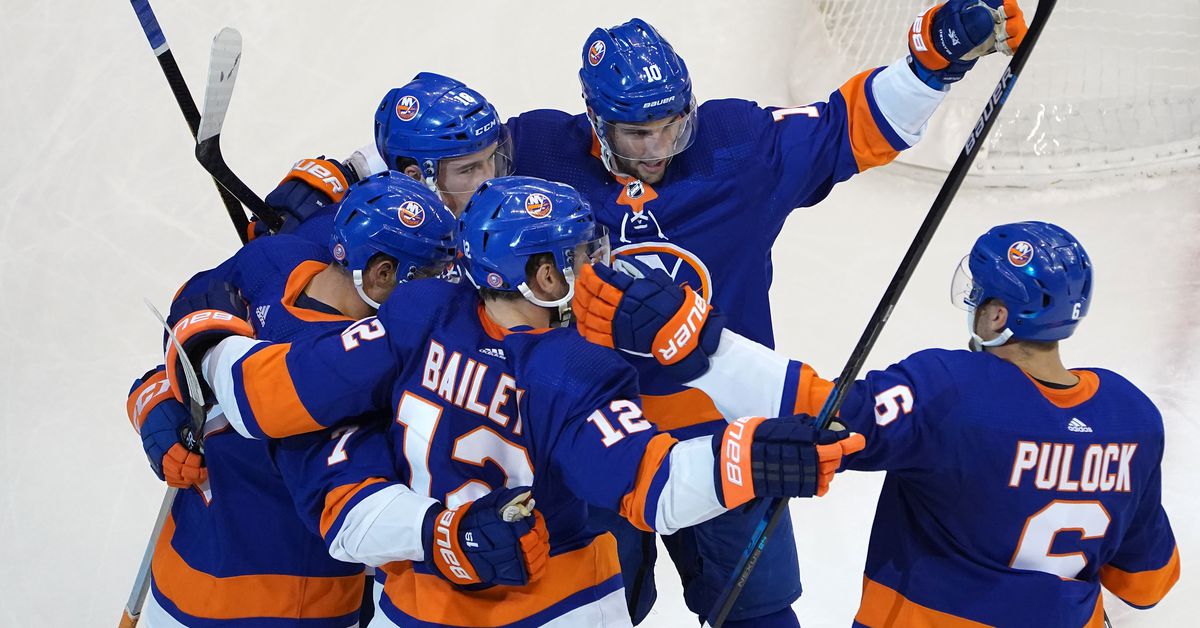 The New York Islanders took a commanding 2-0 lead in their best-of-five qualifying series with a 4-2 win over the Florida Panthers Tuesday in Toronto. Jordan Eberle scored the game-winning and insurance goals, Anthony Beauvillier and J-G Pageau again had strong games, and Semyon Varlamov made 24 saves to move his Islanders playoff record to 2-0.
Unlike Game 1, where the Islanders worked from their preferred position of protecting the lead through automated suffocation, in Game 2 the Isles conceded the first goal, then conceded another lead barely a minute after tying it 1-1 in the second period. But they stuck to their game to outlast and frustrate the Panthers, entering the third period with a 3-2 lead and comfortably shutting the door in the third.
[Game Sum | Event Sum | NHL GameCenter]
First Period: A little uneasy
The Islanders looked a little flatter to start this afternoons contest than they did to start Game 1. The Panthers, on the other hand, revealed their desperation and controlled the puck, though they were unable to register a shot-on-goal through the first five minutes of play.
Mike Matheson got a stick up in the face of Brock Nelson to give the Isles a four-minute power play. However, they were unable to generate much on the front half of it, and on the back half of it, a Devon Toews pass off the skates of Anthony Beauvillier lead to a breakaway for Colton Sceviour. Beauvillier took a slashing penalty trying to stop the break and negated the rest of the advantage.
The Panthers only had about a minute of power play time with which to work and Beauvillier returned to the ice upon the expiration of the penalty, but Mike Hoffman fired a wrist shot from the top of the zone through a crowd that may have deflected on its way past Semyon Varlamov.
New York played like themselves following the Florida goal, and another Matheson penalty resulted in a more effective Islanders power play (including Beauvillier dinging the post staring at a yawning cage), but the period ended 1-0 Panthers.
Second Period: Turning the tables
The momentum the Islanders gained in the second half of the opening period carried over to the first third of the second period. They won the 50-50 battles and didnt allow the Panthers to gain control. Sergei Bobrovsky came up with some vintage Sergei Bobrovsky saves.
That battling led to the Isles first goal of the game. Greene pinched in to join a crowd in the corner to poke the puck over to Tom Kuhnhackl. Kuhnhackl skated to the front of the net with Bobrovsky following closely. Noticing Matt Martin behind him, he slipped the puck through his legs for Martin to slam home for the tie.
Did not have Kuhnhackl Goal Mouth Drop-Pass to Martin for Goal on my #Isles playoff bingo card
Dominik & LHHFriends (@LHHockey) August 4, 2020
But this tie was short-lived. Nelson was in the box for hooking Aleksander Barkov about a minute after the tying tally and Florida needed only :16 for Barkov to use Jonathan Huberdeau as a screen before rifling a shot over Varlamovs shoulder short side.
However, the tie was restored on the Islanders fourth power play of the game. New York got control in the Florida zone and worked the puck around. Toews and Ryan Pulock tossed the puck back and forth to set up a Pulock one-time blast that squirted through Bobrovsky.
The Islanders kept the party going and took their first lead of the game, building off the energy from the tying goal and and finally getting the top line going in the process. After getting the puck around the zone, Pulock took a return pass from Mathew Barzal and fed Jordan Eberle across the slot. Eberle held and waited for Panther defenders to dive out of the way before beating Bobrovsky for his first of these playoffs.
Third Period: OPERATION: TROTZ AUTOPILOT
Barzal Survives Near-Disaster: Everyone in Islandersdom who watched this live took a deep breath when Barzal went somersaulting into the boards head first after he rushed the net on a two-on-one. He accepted the feed and got a shot off, then swung his hip to avoid the post to Bobrovskys right, only to lose his balance and tumble awkwardly. After some medical help, the Islanders star got off on his own accord and returned to play.
But the play highlights the danger of a player (Frank Fatrano in this case) shoving a forward into his own goalie. Bobrvosky couldve been the victim here but for Barzals agility:
The Panthers inability to angle off Islanders rushes without taking penalties continued to haunt them. Mackenzie Weegar took the Panthers second stick infraction of the period, and the Islanders made them pay with a power play goal. Anthony Beauvillier took a one-time feed in the left wing circle, and though his shot was heading slightly wide, it took a helpful deflection off of Jordan Eberles leg to go in.
That really sealed the game. The Panthers didnt much threaten after that point and you could see the Isles were in their comfort zone, the Panthers desperate to get something back but looking every bit like it was an improbable task.
Brock is Disliked: Many have noticed how Brock Nelson quietly gets under many opponents skin. Today you can definitely add Huberdeau to that list, as the two tangled the length of the ice while tracking back out of the Panthers zone. Broadcast cameras caught that exchange and the flat, shit-disturber affect Nelson maintained on his expressionless face.
Up Next
No rest for the leaders. These teams are back at it again at noon tomorrow. Do they consider starting Thomas Greiss on this back-to-back?
If the Islanders win that one, theyll rest and await the outcome of the rest of the qualifiers and round robin to learn what comes next.