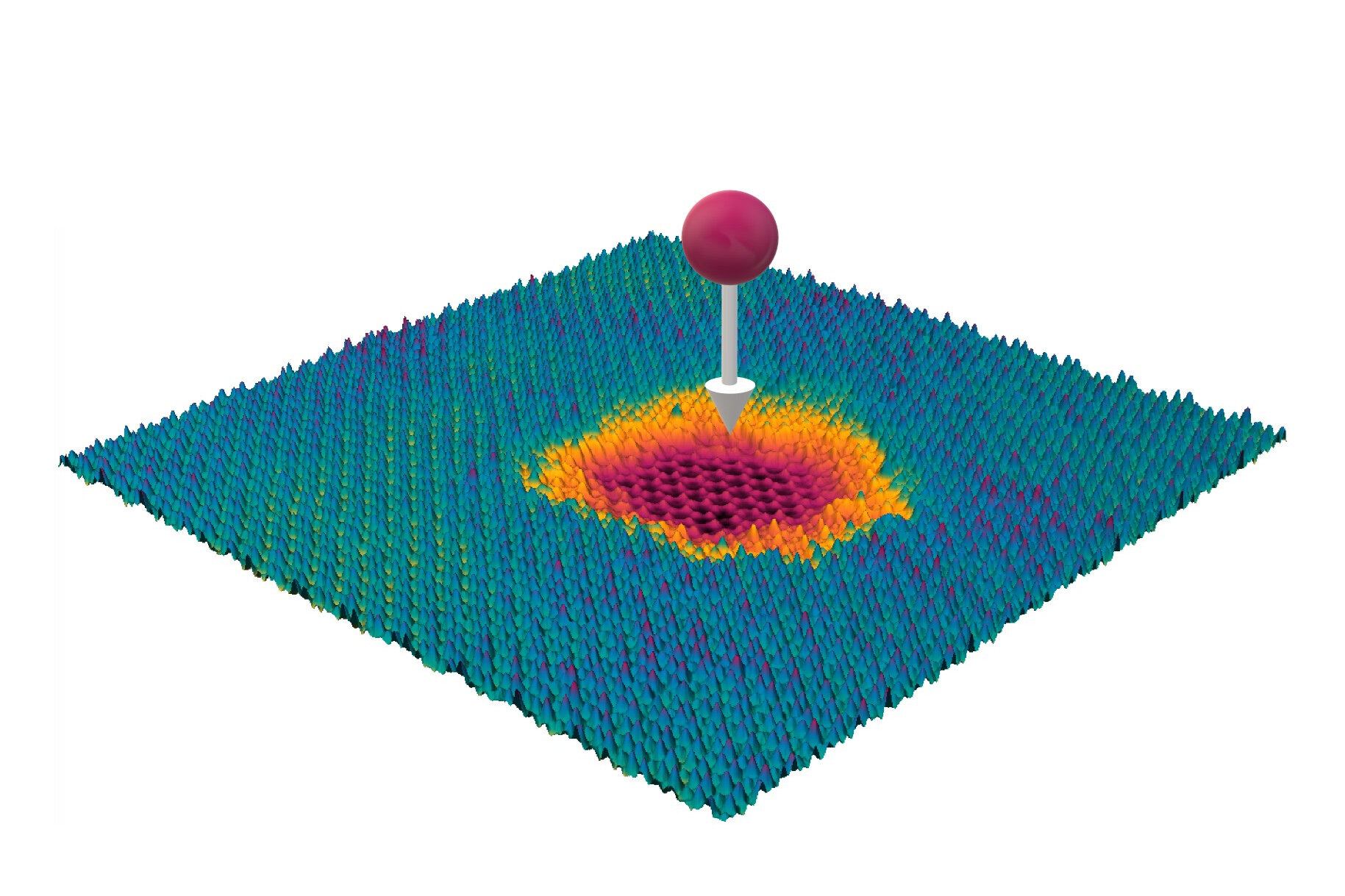 Nobody can shoot a bullet through a banana in such a way that the skin is perforated but the banana remains intact. However, on the level of individual atomic layers, researchers at TU Wien (Vienna) have now achieved such a featthey developed a nano-structuring method with which certain layers of material can be perforated extremely precisely and others left completely untouched, even though the projectile penetrates all layers.This is made possible with the help of highly charged ions. They can be used to selectively process the surfaces of novel 2-D material systems, for example, to anchor certain metals on them, which can then serve as catalysts. The new method has now been published in the journal ACS Nano.
New materials from ultra-thin layers
Materials that are composed of several ultra-thin layers are regarded as an exciting new field of materials research. The high-performance material graphene, which consists of only a single layer of carbon atoms, has been used in many new thin-film materials with promising new properties.
“We investigated a combination of graphene and molybdenum disulfide. The two layers of material are brought into contact and then adhere to each other by weak van der Waals forces,” says Dr. Janine Schwestka from the Institute of Applied Physics at TU WIen and first author of the current publication. “Graphene is a very good conductor, molybdenum disulphide is a semiconductor, and the combination could be interesting for the production of new types of data storage devices.”
For certain applications, however, the geometry of the material needs to be specifically processed on a scale of nanometresfor example, in order to change the chemical properties by adding additional types of atoms or to control the optical properties of the surface. “There are different methods for this,” explains Janine Schwestka. “You may modify the surfaces with an electron beam or with a conventional ion beam. With a two-layer system, however, there is always the problem that the beam affects both layers at the same time, even if only one of them is supposed to be modified.
Two kinds of energy.
When an ion beam is used to treat a surface, it is usually the force of the impact of the ions that affects the material. At TU Wien, however, relatively slow ions are used, which are multiply charged. “Two different forms of energy must be distinguished here,” explains Prof. Richard Wilhelm. “On the one hand, there is the kinetic energy, which depends on the speed at which the ions impact on the surface. On the other hand, there is the potential energy, which is determined by the electric charge of the ions. With conventional ion beams, the kinetic energy plays the decisive role, but for us, the potential energy is particularly important.”
There is an important difference between these two forms of energy: While the kinetic energy is released in both material layers when penetrating the layer system, the potential energy can be distributed very unevenly among the layers: “The molybdenum disulfide reacts very strongly to the highly charged ions,” says Richard Wilhelm. “A single ion arriving at this layer can remove dozens or hundreds of atoms from the layer. What remains is a hole, which can be seen very clearly under an electron microscope.” The graphene layer, on the other hand, which the projectile hits immediately afterwards, remains intact: most of the potential energy has already been released.
The same experiment can also be reversed, so that the highly charged ion first hits the graphene and only then the molybdenum disulphide layer. In this case, both layers remain intact: The graphene provides the ion with the electrons necessary to neutralize it electrically in a tiny fraction of a second. The mobility of the electrons in the graphene is so high that the point of impact also “cools down” immediately. The ion crosses the graphene layer without leaving a permanent trace. Afterward, it can no longer cause much damage in the molybdenum disulphide layer.
“This provides us now with a wonderful new method for manipulating surfaces in a targeted manner,” says Richard Wilhelm. “We can add nano-pores to surfaces without damaging the substrate material underneath. This allows us to create geometric structures that were previously impossible.” In this way, it is possible to create “masks” from molybdenum disulfide perforated exactly as desired, on which certain metal atoms are then deposited. This opens up completely new possibilities for controlling the chemical, electronic and optical properties of the surface.
More information:
Janine Schwestka et al, Atomic-Scale Carving of Nanopores into a van der Waals Heterostructure with Slow Highly Charged Ions, ACS Nano (2020). DOI: 10.1021/acsnano.0c04476
Citation:
Researchers develop technique for processing surfaces on an atomic scale (2020, August 3)
retrieved 3 August 2020
from https://phys.org/news/2020-08-technique-surfaces-atomic-scale.html
This document is subject to copyright. Apart from any fair dealing for the purpose of private study or research, no
part may be reproduced without the written permission. The content is provided for information purposes only.

A Florida mother lost a son to Covid-19. Days later, her daughter also died of it – CNN