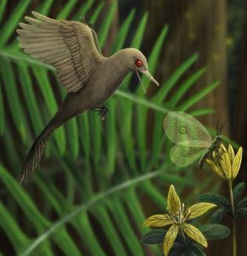 (Newser)
Oculudentavis khaungraawas was a strange and fascinating creature, scientists say—but it probably wasn’t a dinosaur. Researchers who identified the hummingbird-sized animal as the smallest known dinosaur in a study published earlier this year have retracted their claim following new research and the discovery of another Oculudentavis fossil, NBC reports. The researchers, who identified the creature as a bird-like dinosaur from a skull found in a small chunk of 99 million-year-old amber in Myanmar, now believe Oculudentavis was a lizard. The creature had more than 100 extremely sharp teeth and weighed around as much as two dollar bills.
Other researchers said CT scans of the skull revealed that many of the creature’s features were more lizard-like than bird-like, including its teeth. “It’s just a really weird animal and an important discovery regardless of whether it’s a weird bird or a weird lizard with a bird head,” original study co-author Jingmai O’Connor tells LiveScience. She says that while her colleagues haven’t conclusively proven that Oculudentavis was a lizard, not a bird-like dinosaur, she believes they are correct. She says if it was indeed a lizard, as may be established by researchers examining the second fossil, it could represent a “new and strange instance of convergent evolution between widely disparate reptile groups.” (Read more discoveries stories.)