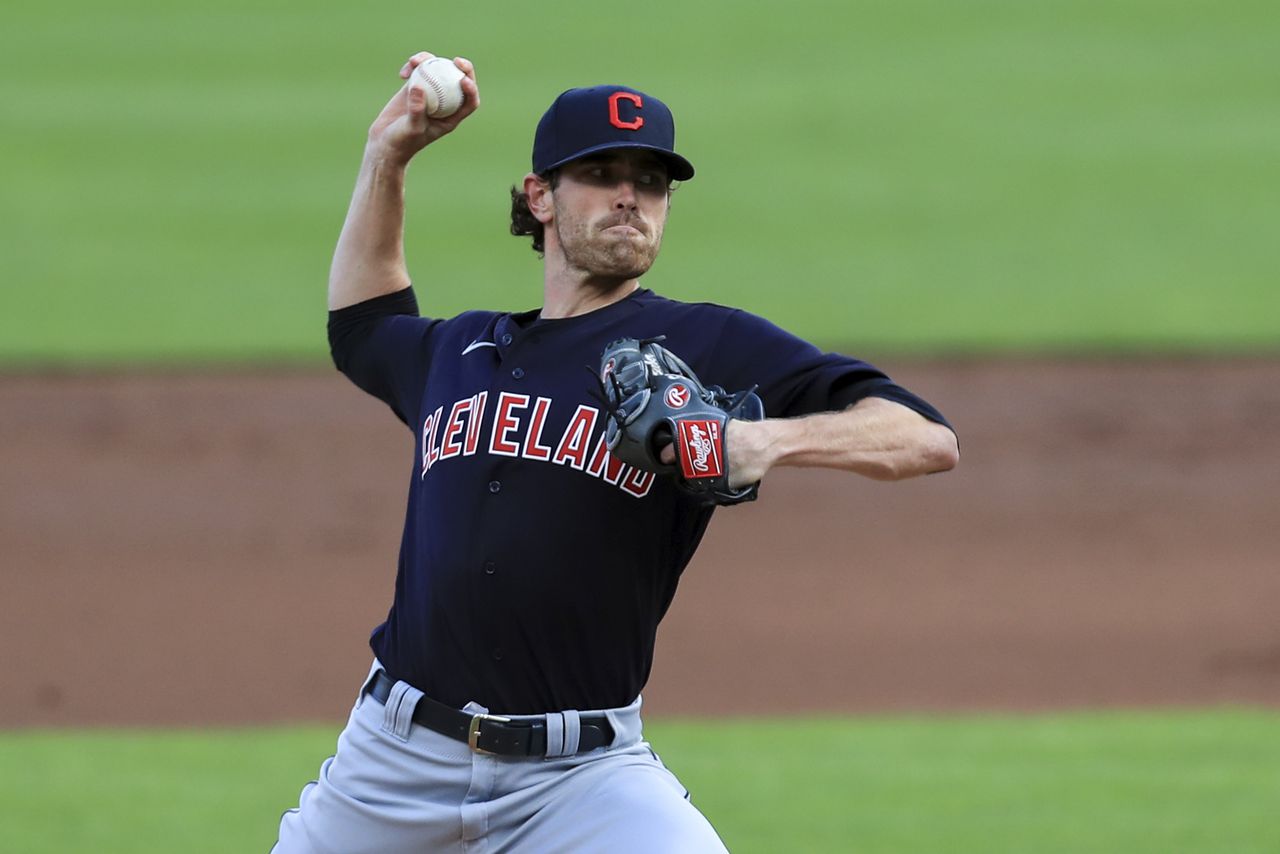 CLEVELAND, Ohio — Now thats a rally and Shane Bieber deserved it.
The Indians, staring at their fifth straight loss on Tuesday night, scraped together a two-run outburst befitting a team that started the game hitting .190. They tied the Reds, 2-2, in the seventh inning on an error, an infield hit and three walks to give Franmil Reyes a chance to finally gather himself and do what hes paid to do.
Reyes, lost at the plate through through the first 11 games of the season, hit a two-run homer in the eighth inning to give the Indians a 4-2 win at Great American Ball Park as they limped home after a 2-4 trip. Reyes entered the game hitting .171 (6-for-35) with 12 strikeouts.
The homer gave Bieber (3-0, 0.89) his third win in as many starts. He struck out eight in 7 2/3 innings to give him 35 strikeouts to open the season. Hall of Famer Nolan Ryan holds the MLB record with 37 strikeouts.
Shane was awesome, said acting manager Sandy Alomar. He settled down and kept us in the game and our offense came through.
Heres a look at the rally that may have revived an offense that has been missing in action since the season opened on July 24. Reyes started the seventh against Pedro Strop by reaching on an error by shortstop Freddy Galvis. Bradley Zimmer walked, but Jordan Luplow struck out to remain hitless for the season.
Sandy Leon lined out to right, but Oscar Mercado kept the inning going with a walk to load the bases. Cesar Hernandez beat out an infield hit to first as Reyes scored to make it 2-1. Jose Ramirez coaxed a walk from Lucas Sims to tie the score at 2-2. The inning ended when Francisco Lindor grounded out to first.
So the Tribe matched its biggest inning since Thursday on an infield hit, three walks and an error. Roll on Big O.
I just wanted to (see) the fight, said Alomar. They were very motivated to fight and have good at-bats. They did that. It wasnt line drive after line drive, but they kept moving the line. Thats important because it puts pressure on the defense and makes the pitchers throw strikes.
Bieber wasnt invincible on Tuesday, but he was still pretty darn good. He allowed two runs on five hits to improve to 2-0 lifetime against the Reds.
It was fun to see Franmil come up huge right there, said Bieber. I know we were frustrated as a team for a lot of different reasons earlier in the game. It was nice to see everyone stay strong and pull together at the end.
Bieber, after tying an MLB record with 27 strikeouts in his first two starts of the season, allowed homers to Nick Castellanos and Eugenio Suarez, but that was it. The Indians won two games on this trip and, not surprisingly Bieber won them both.
I was really happy Sandy let me come out for the eighth inning, said Bieber. I want to go as long as possible and give our team and myself as many opportunities to capitalize on the game as possible. I was definitely stoke to go out for the eighth.
In fact, he opened the trip with a 2-0 win over the Twins on Thursday. He struck out 13 and threw eight scoreless innings in that game.
Castellanos homered with two out in the first. It was his sixth homer of the season and second in as many games against the Indians.
Bieber entered the game needing 11 strikeouts to set the MLB record for strikeouts in the first three games of a season. He fell three short, but no one with the Indians is complaining.
Relievers James Karinchak and Brad Hand followed Bieber to the mound. Karinchak struck out the dangerous Castellanos to end the eighth. Hand pitched the ninth for his third save of the year.
Karinchaks curveball was right on point, said Alomar. I guess all that rest Brad had (helped). He had pretty good velo, throwing 93 mph to 94 mph. We were very pleased. He went one, two, three.
Cincinnati starter Tyler Mahle threw six scoreless innings. He struck out six, walked two and left with a 2-0 lead. In his two previous two starts against the Indians, he went 0-2 with an 11.37 ERA (eight earned in 6 1/3 innings).
Mahle was a different pitcher Tuesday. He allowed one hit, Mercados leadoff single in the third. He allowed two other runners to reach, both on walks.
Bieber retired eight of the next 10 batters following Castellanos first inning homer. Suarez ended that run with a one-out homer in the fourth for a 2-0 lead. Suarez hit a 1-2 fastball. He allowed two singles after Suarezs homer.
A variety of Cleveland Indians face masks available online today. (Fanatics.com)
New Indians face masks for sale:Heres where you can buy Cleveland Indians-themed face coverings for coronavirus protection, including a single mask ($14.99) and a 3-pack ($24.99). All MLB proceeds donated to charity.
More Indians coverage
Cuyahoga County signs off on $3.5 million payment to Cleveland Indians for past Progressive Field work
Cleveland Indians pitchers trying to maintain focus while hitters wither on the vine
Where can the Cleveland Indians find help for their woeful offense? (podcast)